Nat Fyfe of the Dockers shows off the Brownlow Medal he won on Monday night. Picture: Getty Images

Fremantle captain Nat Fyfe has won the 2019 Brownlow Medal, claiming the AFL’s greatest individual honour for the best and fairest player for a second time.

Fyfe gained 33 votes to finish first in front of Geelong’s Patrick Dangerfield (27 votes), Brisbane’s Lachie Neale and Carlton’s Patrick Cripps (26 each) in a dramatic finish to a close count on Monday night.

The votes are awarded by the umpires in each game of the regular season.

The superstar Docker is the 15th player in VFL/AFL history to win the Brownlow Medal multiple times, having also won it in 2015.

Fyfe only played 20 games this season and the Dockers managed just nine wins. But it didn’t matter for Fyfe, who now has more career Brownlow votes than games, something only previously achieved by pre-war great and three-time medallist Haydn Bunton Sr.

Fyfe said a dig* from coach Ross Lyon that he was “cruising”* helped inspire him to improve.

“As recently as last year, about December, I was just going through the motions with my training and preparation with the idea of playing more footy towards the back end* of the season,” Fyfe said. “He challenged me to say, ‘You’re cruising, I don’t think how you’re performing and preparing at training is up to standard, I think you’ve got more in you’. That was a spark to really get going,” Fyfe said. 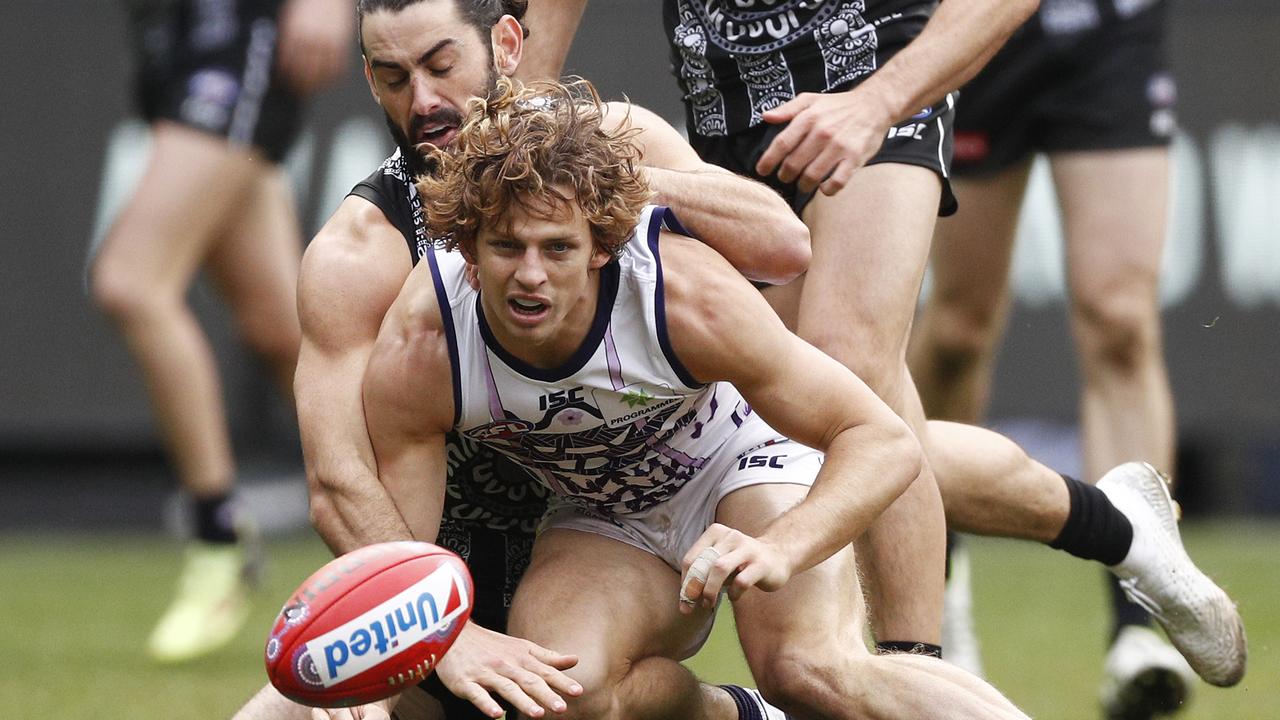 Fremantle captain Nat Fyfe and Brodie Grundy of the Magpies contest the ball in Round 11. Picture: AAP

Having turned 28 last week, Fyfe could yet become a three-time Brownlow Medal winner.

However, the 2015 and 2019 winner said he was “jealous” of the two teams that were playing in this week’s Grand Final and would prefer to be a premiership* captain instead.

“The Brownlow’s a weird one because I don’t have a premiership medal,” Fyfe said.

“So I’d hate to be sitting here at the end of my career with two or maybe three Brownlows and no premiership. I’d trade these in a heartbeat for the opportunity just to play in another Grand Final.”

OTHER AWARDS
Goal of the year: Eddie Betts, Adelaide Crows

Wise words from a circus star

CLASSROOM ACTIVITY
1. Design your own Brownlow Medal
Create an award for the best sportsperson or student at your school. Think of three characteristics you want the winner to show (such as sportsmanship, top sporting ability, being a good role model or being fair to others).

Now design a medal to be presented each year. Think about how you can add some of the characteristics the medal represents into its design.

VCOP ACTIVITY
Verb adventures
With a partner see if you can you identify all the doing words/verbs in this text. Highlight them in yellow and then make a list of them all down your page. Now see if you and your partner can come up with a synonym for the chosen verb. Make sure it still makes sense in the context it was taken from.

HAVE YOUR SAY: Who did you want to win the 2019 Brownlow Medal? Why?
No one-word answers. Use full sentences to explain your thinking. No comments will show until approved by editors.