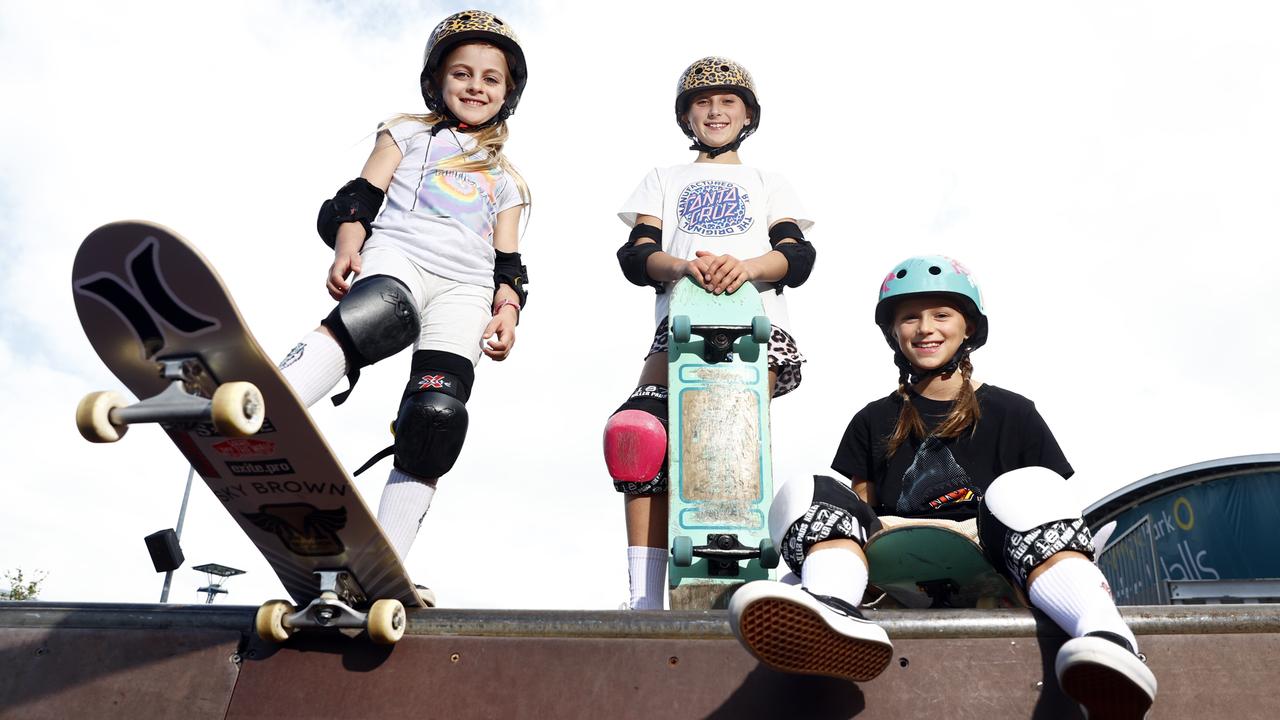 Paige Tobin, 6, Addison Garner, 11, and Lacey Garner, 8, are among the growing number of girls getting into skateboarding. Picture: Richard Dobson

Girl power is taking over the skate parks as a record number of female skateboarders wheel towards the Olympics.

While her schoolmates play in the playground, six-year-old skateboarder Paige Tobin is busy outdoing* the boys with her jaw-dropping tricks on the ramp.

The NSW student, who has become an internet sensation through her viral skating videos, has set her sights on the 2028 Olympics.

“I love the way skating makes me feel,” she said. “I really want to compete in the Olympics to see all my friends and I would feel very proud representing Australia.” 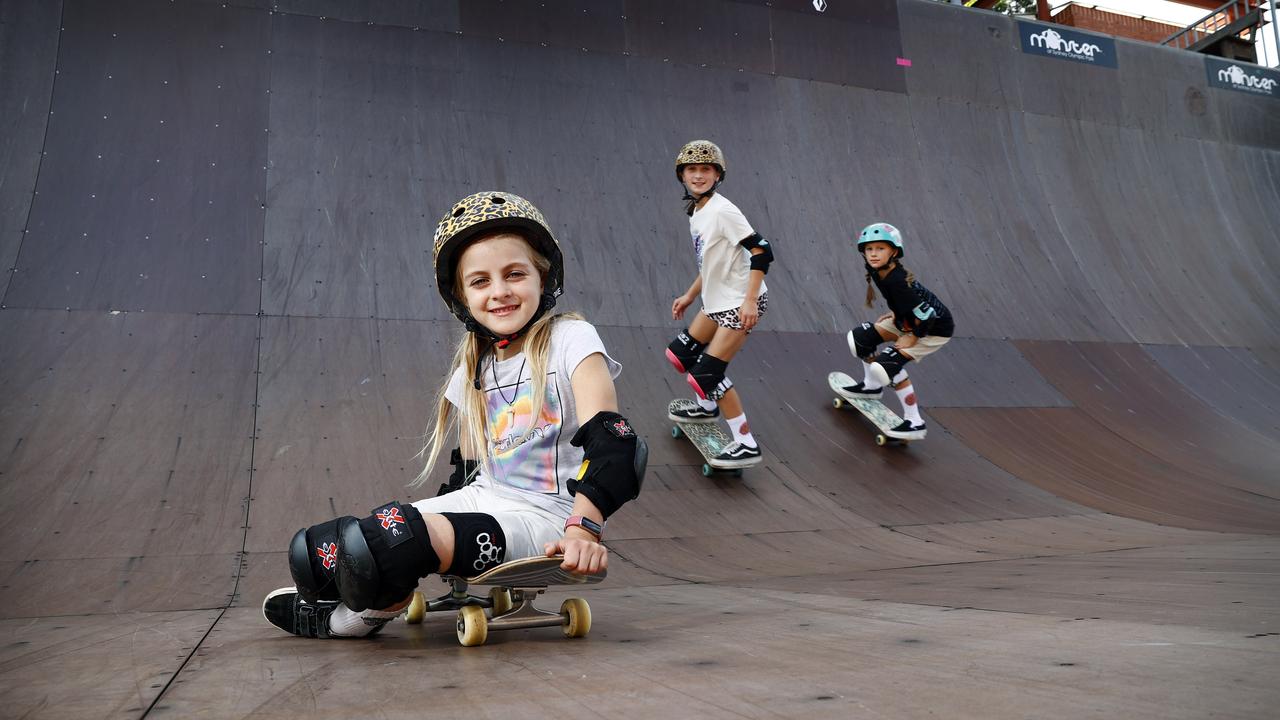 The youngster has already won the King of Concrete skateboarding competition for under-9s in Melbourne.

She is one of hundreds of girls who have decided to take up the sport in recent years, with the Monster Skatepark in the Sydney suburb of Mona Vale seeing a 700 per cent increase in girls enrolling in the program since 2018.

Owner Darren Hughes said more than 50 per cent of participants were now female.

“It’s a really individual sport, so for those girls who aren’t really into team-based sports it’s a way for them to express themselves,” he said.

Paige’s mother, Emma Tobin, has seen a growing number of girls hitting the skate ramps during the Covid-19 pandemic.

“It’s amazing watching the amount of female skaters that are starting to take on the sport,” she said. “During Covid, skate parks were open and it was something that you could go out and do.” Monster Skatepark owner Darren Hughes believes the debut of skateboarding at last year’s Olympics has increased the popularity of the sport with girls like Paige Tobin and Lacey and Addison Garner. Picture: Richard Dobson

Mr Hughes believes skateboarding’s debut at last year’s Tokyo Olympics has made all the difference.

“It gives validation* to parents that this is a valid* sport for their kids, it’s not just them having fun with their friends,” he said.

Skateboarding will also be part of the next Olympic Games in Paris, France, in 2024, and the International Olympic Committee last month approved the sport for the 2028 Olympics in Los Angeles in the US.

Skater on track for a switch kickflip front board

CLASSROOM ACTIVITIES
1. Justifying your preferences
According to this story, the sport of skateboarding is becoming increasingly popular with females. Some reasons are provided for its appeal. Does the sport appeal to you? Provide three detailed reasons to explain why skateboarding is a sport you would or would not like to participate in.

2. Extension
The International Olympic Committee regularly considers new sports for trial or permanent inclusion at the Olympics. Name a sport that you think the committee should approve next and explain why it belongs in the Olympics.

VCOP ACTIVITY
Girls in sport
Skateboarding is not the only sport that we are seeing an increase in females participants. What sports have you noticed, or maybe joined yourself, where you have seen an increase in the amount of girls now playing?

How do you feel about this? Why do you feel this way? Do you think it’s a positive shift? Why/Why not?

Use your VCOP to express how you feel towards girls taking up more sporting roles. Explain why you feel this way. Use your emotive language to express your point of view.