Australian marathon swimmer Chloe McCardel reacting aboard her support boat, off the coast of Calais, France, after completing her 35th swim across the English Channel on August 16. Picture: AFP/Jason Kelvin via Newgate Comms

Australian Chloe McCardel has become the second highest capped* swimmer of the English Channel, finishing her 35th crossing in the early hours of Sunday.

The 35 year-old had to battle early worries about changing quarantine rules issued by the UK and France before her swim even began, which was brought forward from a Sunday morning to a Saturday evening start by officials.

Then, when she was three-quarters of the way through the pitch-black night swim, a deep mist enveloped the sea. If that fog had rolled in just half an hour earlier when she was in the midst* of the busy sea lane, the swim would have been abandoned.

Immediately after finishing her 10 hour 40-minute crossing, a thrilled but tired Ms McCardel said:’ “I’ve got channel fever, I’d like to get one or two more this season if possible. I am now number two.’’

Ms McCardel landed on French territory as dawn was breaking and for the swim to be recognised she had to stand on dry land, and be observed clearing the water line where she can wait for up to 10 minutes.

It only took two minutes for Ms McCardel to be given the okay. “I just took a brief moment and then got back in the water to get to the boat, I just wanted to get back.’’

During the crossing, Ms McCardel had to swim under the night sky. In the blackened water the boat’s pilots accompanying her were shining a bright beacon*.

“They don’t want to lose a swimmer, but it meant swimming like a deer in the headlights,’’ she said.

“I am not a fan of night swimming because visibility is very black. There are really strong fluorescent blinding beams coming at you from multiple angles. The captain can see you super clearly, but I felt really disconnected from my crew, I couldn’t see faces, only outlines for virtually the whole swim.’’ 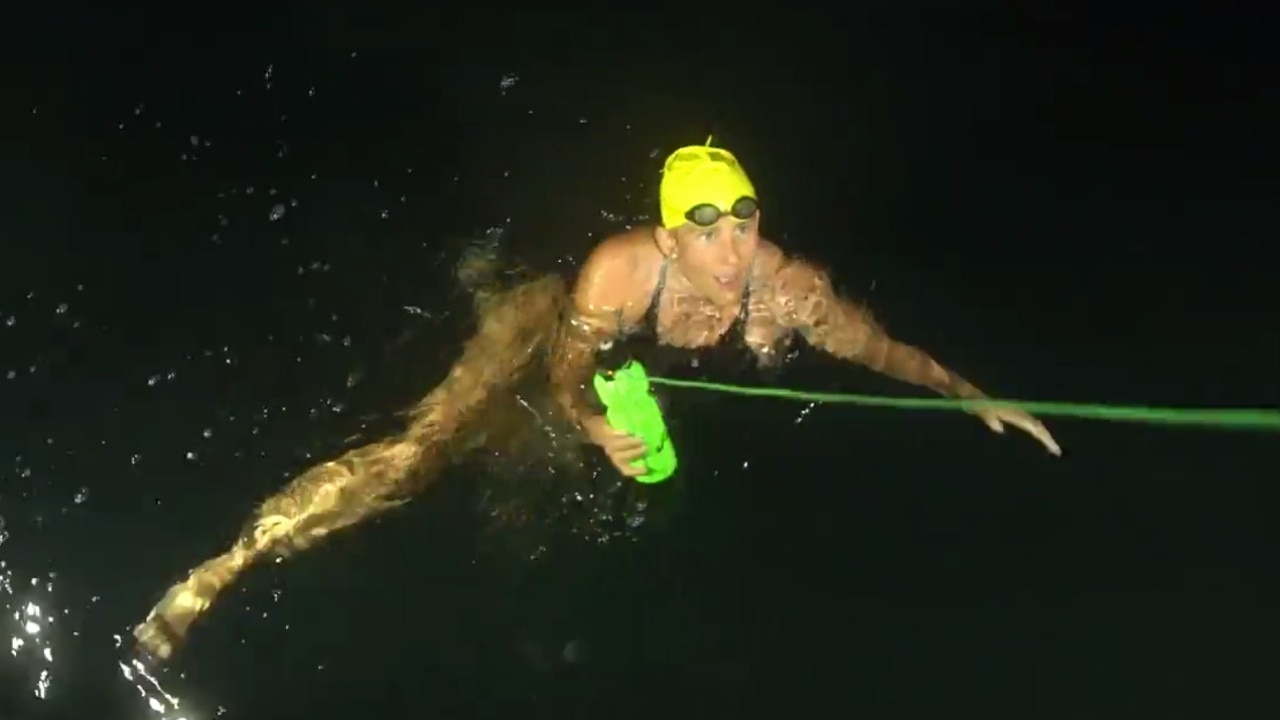 Chloe McCardel during her attempt to break the men’s world record for the greatest number of English Channel swims, August 16, 2020. Picture: supplied

However there was one upside to the overnight conditions.

“It was really flat water I was negotiating, it was a joy,’’ she said.

Without the wind, the heavy mist also set in when Ms McCardel had passed the second shipping lane closest to the French coast. Fortunately she had exited the shipping lane before the visibility dropped.

Otherwise, she explained, “they would have aborted* the swim because we can’t see the cargo ships — we can’t manoeuvre quickly because we are tiny and they can’t because they are big’’.

“If I was an hour or two behind where it was, it would have been cancelled, so I was lucky.’’

Ms McCardel said she was also fatigued* from having done four channel crossings in 16 days in an effort to pass the 34 swims recorded by the UK’s Kevin Murphy. With her 35 swims, Ms McCardel is now number two on the all-time list behind Alison Streeter, also from the UK, who has crossed the channel 43 times.

Of her latest effort, Ms McCardel said, “It was so much harder than I thought, I was really happy to finish’’.

In another quirk of timing, she escaped having to quarantine because of a prearrangement made by the Channel Swimming Association and the coastguards of Britain* and France, even though Britain now requires all travellers from France to quarantine at home for two weeks.

But she said ongoing swims may be impacted: “We know Britain is requiring some countries to quarantine and while they have exempted the channel swimmers, we don’t know what the French will do in the next few days.

“We were allowed because what we do is so socially distanced and closely managed, but it’s an evolving situation. I am fully prepared, I could get local lockdown here in Kent (in the UK), or it could be the channel gets locked down.’’ Chloe McCardel about to swim in Sydney Harbour, NSW, with the Opera House and Harbour Bridge in the background, before she left Australia in July. Picture: Brett Costello

FAST FACTS
The English Channel is a body of water between France and England. It is part of the Atlantic Ocean.

It varies in width from 240km to 34km. Swimmers cross the narrowest point, the Strait of Dover.

The Strait of Dover is thought to be the world’s busiest shipping lane, with 500-600 ships travelling it each day.

The first person to swim the English Channel was Matthew Webb across the Strait of Dover, swimming from England to France on August 24-25, 1875 in 21 hours 45 minutes.

The fastest verified swim of the Channel was by Australian Trent Grimsey on September 8, 2012, in 6 hours 55 minutes.

CLASSROOM ACTIVITIES
1. For and Against chart
Chloe McCardel had both good luck and bad luck on her 35th crossing of the English Channel. While she successfully swam the distance, she commented that it was harder than she thought. In the lead up and throughout the swim some things worked in her favour and others didn’t.

Draw a chart and list the things that worked FOR Chloe completing the swim and those that worked AGAINST her.

2. Extension
Locate the English Channel on a map that includes the UK and Europe. Draw a line to show where Chloe McCardel swam from and to.

Use the information in the article to help you calculate …

Converting the time to a decimal figure or into minutes may help. Don’t forget to convert minutes back to hours to get the speed per hour.

HAVE YOUR SAY: What sport would you most like to do? Would you like marathon swimming?
No one-word answers. Use full sentences to explain your thinking. No comments will be published until approved by editors.