Darcie Brown (second from left) of the Strikers celebrates with teammates after taking the wicket of Jess Jonassen of the Heat during the Women's Big Bash League match between the Brisbane Heat and the Adelaide Strikers at North Sydney Oval, on November 07, 2020, in Sydney, NSW. Picture: Getty Images

Adelaide Strikers fast bowler Darcie Brown has been named Young Gun of the WBBL, while completing her year 12 exams from inside a Cricket Australia player hub.

“I can’t really believe it at the moment, it will probably sink in a bit later, but I’m pretty humbled*, it’s really cool,” she said.

Brown made headlines in 2019 when she was signed by the Strikers as a 16-year-old, making her the youngest cricketer – male or female – to do so.

The 17-year-old bowled at speeds over 125kmh during the Strikers’ Big Bash campaign, topping the bowling speeds achieved by bowlers twice her age. 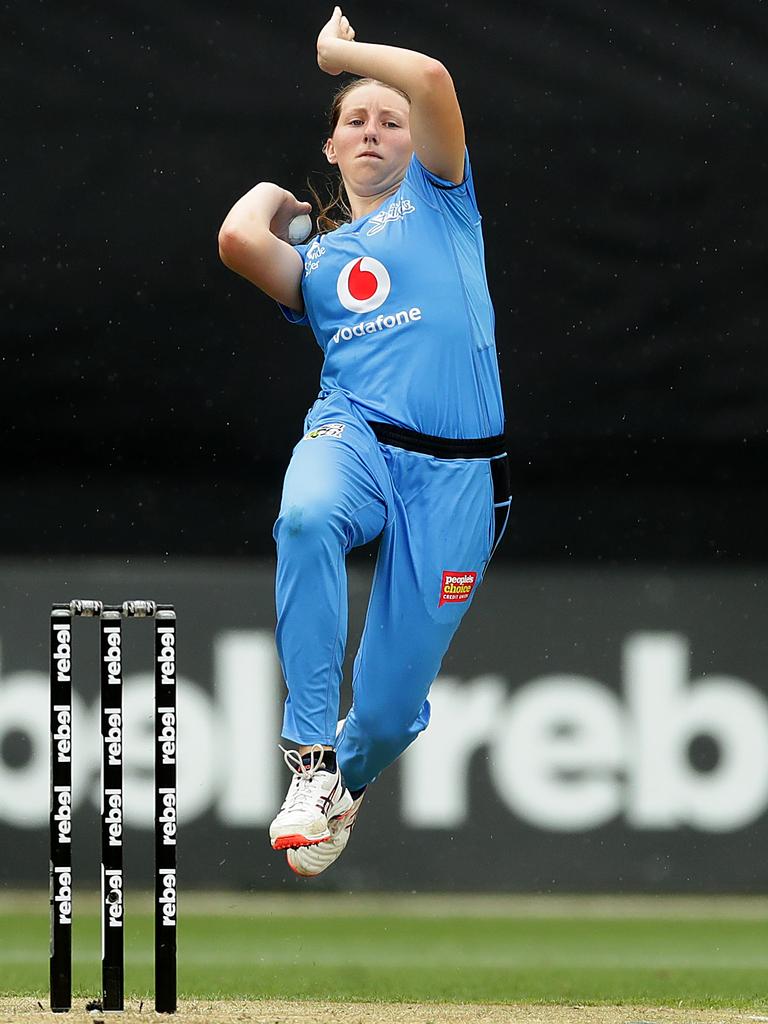 Darcie Brown of the Strikers bowls during the Women’s Big Bash League WBBL match between the Sydney Thunder and the Adelaide Strikers at Giant Stadium, on October 31, 2020, in Sydney, NSW. Picture: Getty Images

She made a stunning WBBL debut against Hobart Hurricanes on October 25 as part of the Strikers’ eight-wicket win, finishing with figures of 3-13, including the wicket of Australian all-rounder Nicola Carey, whom she bowled for a duck.

While the Strikers missed out on getting into the finals, Brown finished the tournament with 10 wickets and dismissed the game’s biggest names: Jess Jonassen, Beth Mooney and New Zealand internationals Sophie Devine and Amy Satterthwaite.

“It’s the longest I’ve been away from my family,” she said, admitting she was looking forward to returning to Adelaide this week. It’s been a big year for Darcie Brown, looking forward to returning to her family after living, competing and completing year 12 in the player hub in Sydney. Picture: Roy Van Der Vegt

She said she was also looking forward to further developing her game and speed.

“I don’t know how much faster I can get, hopefully I can get a bit more consistent, and don’t bowl as many wides, but I suppose if I do more gym programs, strength will come and hopefully I can bowl a bit quicker,” she said.

Scorchers opener Devine described what it was like having faced a Brown bouncer during the tournament as: “She’s sharp, I think it’s really exciting, this tournament’s unveiled a couple of really quick bowlers which is great for the women’s game.

“It’s going to get some old girls like me hurrying up a little bit and probably learning how to duck a bit better.

Devine has been named as the Player of the Tournament (she also won this award last year, while playing for the Strikers), with 31 votes ahead of Melbourne Stars captain Meg Lanning on 29 votes and Sydney Thunder’s Heather Knight on 28 votes.

CLASSROOM ACTIVITIES
1. Introducing Darcie
This news article provides us with lots of information about Darcie Brown and her achievements so far. Imagine that she is coming to your school to talk to the students and you have been asked to introduce her. Carefully select the information that you think is most important or that will grab people’s attention and write your introduction. Practice reading it out loudly, clearly and with expression, as though you are presenting to an audience.

2. Extension
Find out the names of the teams in the WBBL. (Some of the names are mentioned in the news story.) Brainstorm a list of at least 10 other names that could be used for a potential new team. Choose your favourite, explain why you think it’s a great name and design a team logo.