The great-great-grandfather of Australian sheep farmer Eddie Morgan was one of our nation’s most famous and fascinating* generals, who lead the Diggers* to victory at Villers-Bretonneux in World War I exactly 100 years ago.

Tomorrow, Eddie will lead another team of Australians to a battle in the muddy fields of the French town — again hoping for a win, but this time a friendly one.

The South Australian is captain of the 2018 Anzac Cup team, which will be playing a French AFL side in the annual celebratory clash. 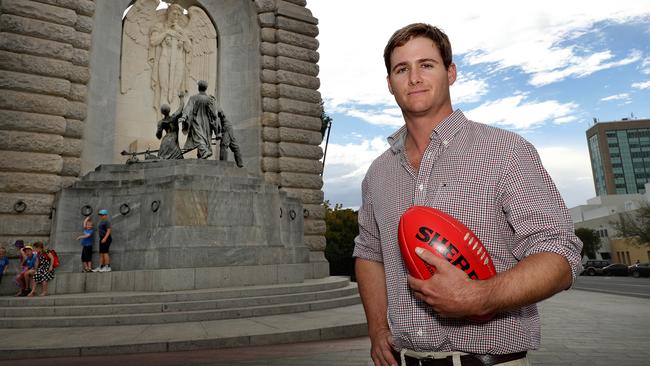 Eddie Morgan in front of the Adelaide War Memorial before heading to France to follow in his great-great grandfather’s footprints and play in an Anzac Day AFL match. Picture: Dylan Coker.

And he has big boots to fill. His great-great grandfather was Brisbane’s legendary Brigadier Thomas William Glasgow, whose gruff* yet cool leadership of the 13th Brigade achieved success against all the odds on April 25th, 1918.

Eddie, 27, who manages the family sheep station near Olary in rural South Australia, knew of his connection to Brig Glasgow, but when he studied the battle of Villers-Bretonneux in Year 12 at Adelaide’s St Peter’s College he became particularly familiar with the story. Glasgow began soldiering in the Boer War and was decorated* for extreme courage. He and his men were in the thick of some the worst fighting at Gallipoli and on the Western Front — and after the war he became a Nationalist Senator and Australia’s first High Commissioner to Canada.

While excited to walk the ground won by his ancestor, Eddie notes: “It’s important to remember this is something that he did, not the family. We are very proud of it but the people who fought in the war did those things — we can’t take credit today.” 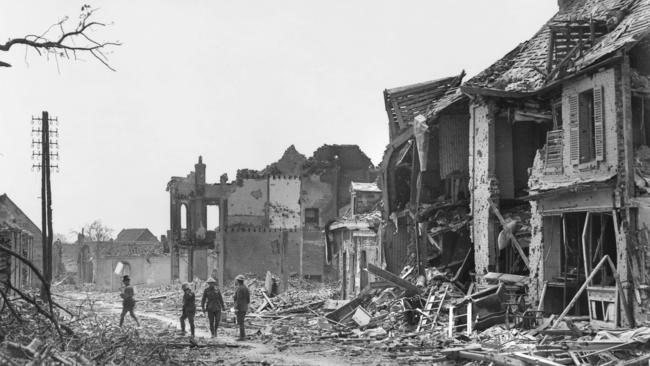 However he does believe Glasgow’s firm yet understated* style has been passed down in the family, on his mother’s side.

“It’s a bit of a characteristic* of people who live in the bush. We’re not too loud; I like to keep my words to the point and not overstate things. The family is like that.”

Despite that, Eddie definitely wants to speak up and trade family stories with the locals and fellow Australian visitors in France.

Tomorrow he’ll go to the Dawn Service at the nearby Australian National Memorial — where Prime Minister Malcolm Turnbull and Prince Charles will be joined by 8000 others, most of them Aussies — before the AFL clash in the afternoon.

And regarding the outcome and his opponents, the midfield player is being cautious*.

“I’m excited,” he says. “But I’m reticent* to sling too much cheek because the French team might be pretty good.” Priscilla Lodge in front of the Australian War Memorial in London on her way to Villers-Bretonneux in France for the annual Anzac Day AFL match. Picture: Ella Pellegrini

Eddie’s teammates hail from all over Australia and are both male and female. Captaining the women’s squad is Victorian Priscilla Lodge, whose four great-uncles all fought in the area — two of them, Gus and Frank, becoming rewarded for their bravery at nearby Pozieres.

“To represent my country in a place where my family represented the country is an honour not lost on me,” she said.

“To be related to these men who were so young, so brave and perhaps a bit naive*, is extraordinary. What they did is unimaginable* and it certainly puts the problems of 2018 into perspective*.”

decorated: to give a medal or award

characteristic: feature or quality of a particular person

reticent: not wanting to reveal your thoughts

unimaginable: impossible to imagine or understand

perspective: a particular way of thinking about something

Write a summary of what is happening in the French town of Villers-Bretonneux tomorrow to commemorate Anzac Day. Then give your thoughts about the contrast between the morning’s activities and those in the afternoon. Do you think it is significant or symbolic?

Anzac Day services follow a fairly consistent sequence of events — name three things an attendee would expect to see or hear at an Anzac Day service and write a paragraph for each to explain its significance.

Extension: Find out what is happening in your local area to commemorate this Anzac Day.

Brigadier Glasgow and his great-great-grandson Eddie Morgan are living two very different lives 100 years apart, yet from what we know about them, it seems they may have shared similar personal qualities. Make a list of words that you think could be used to describe either of the men.

Extension: Write about your personal experiences of Anzac Day and what it means to you. Do you have any relatives you know about who have served in the defence forces? Have you been to an Anzac Day service or march before? What will you do this Anzac Day?