Novak Djokovic holds the winner’s trophy and Nick Kyrgios holds the runners-up trophy after the Wimbledon men’s final at the All England Club on July 10, 2022. Picture: Getty Images

Despite winning the first set and playing some incredible tennis, it all unravelled for Nick Kyrgios as Novak Djokovic stormed to an incredible seventh Wimbledon title.

Like every Kyrgios match, there was no shortage of fireworks.

With the match locked at one set apiece, Kyrgios was issued a code violation* for complaining to the chair umpire that fans were distracting him while he was serving.

As he closed out his service game he said: “They’re distracting me when I’m serving in a Wimbledon final, she’s drunk out of her mind.

“Why is she still here? She’s drunk out of her mind in the first row, speaking to me in the middle of a game. What’s acceptable? Nothing is acceptable? So kick her out! Nick Kyrgios was issued a code violation for an outburst about a disruptive fan during his Wimbledon finals match in which he also directed his anger at his supporters’ box.

Kyrgios continued to rant and complain throughout the match, with most of his rage directed at his supporters’ box where his girlfriend, dad, sister and trainers sat. He complained they were not supporting him loudly enough.

After claiming the first set, Kyrgios was unable to claw his way back into the contest in the next two sets. He was able to push Djokovic to a fourth set tie-break but the dream of his first singles title came to an end.

Gracious* in defeat, Kyrgios said: “He’s a bit of a god, I’m not going to lie. I want to congratulate Novak.

“To all the ball kids and umpires, I know we have tough relationships, thanks for putting up with it.” Despite his loss to Novak Djokovic, Australian Nick Kyrgios played some great tennis in the men’s singles final at Wimbledon. Picture: Getty Images

Asked if he was hungry for more grand slam finals chances, Kyrgios added: “Absolutely not! I’m so exhausted. I need a well earned vacation. Maybe one day I’ll be here again but I don’t know about that.”

Kyrgios defied* the doubters – including himself – just to reach the final and allow himself to dream about winning one of the most revered* prizes in all sports.

But despite playing well, he was no match for the ruthless Djokovic, who claimed his 21st grand slam title and seventh on the centre court at the All England Club, where the Wimbledon tournament is played.

Djokovic, who was kicked out of Australia just before the Australian Open because he refuses to get a Covid-19 vaccination, is now just one grand slam title behind record holder Rafael Nadal. Kyrgios might alienate* a lot of people, but there’s also a whole generation in his corner who love his untraditional approach and desire to shake things up.

Ebden and Purcell are the first all-Australian pairing in 22 years to win the men’s doubles. They did it the hard way, beating the defending champions from Croatia – Nikola Mektic and Mate Pavic – in a five-set thriller 7-6 6-7 4-6 6-4 7-6. 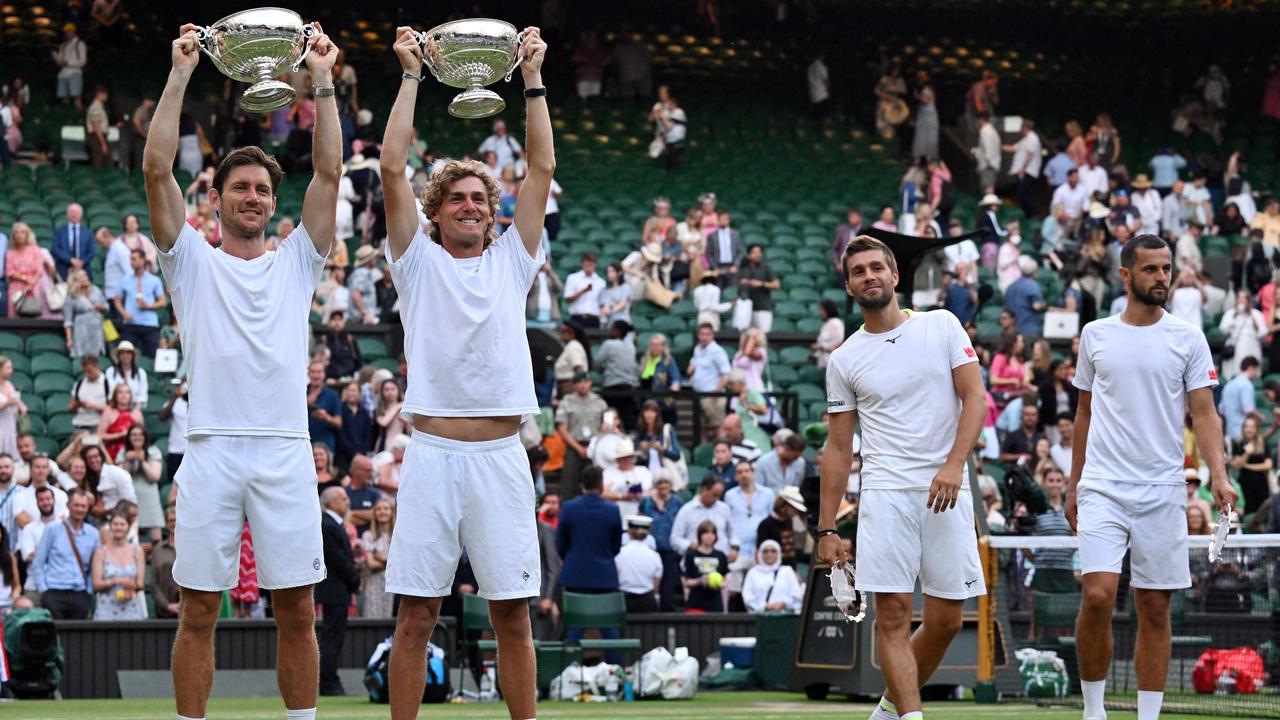 CLASSROOM ACTIVITIES
1. Acrostic poem
Create an acrostic poem about Nick Kyrgios. Write the letters of this name down the left side of your page and then write words, phrases or sentences beginning with each letter that describe him, his strengths and weaknesses, and his sporting achievements.

VCOP ACTIVITY
I’ve always wanted to know
If you had the opportunity to talk to Nick Kyrgios or Novak Djokovic, what would you ask them?