Cartoonist Mark Knight sympathises with Melbourne supporters who can’t fully celebrate their team’s best performance in 57 years because of lockdown.

We’re having all sorts of unique experiences under Covid. Home schooling is just one of them.

Another is the Melbourne Football Club finishing on top of the AFL ladder at the end of the home and away season! That hasn’t happened since 1964.

Another unique thing is that if they get to the Grand Final it probably won’t be played at the home of football, the MCG (which is also Melbourne’s home ground).

No, it will most likely be played in Perth. And with border restrictions, there’s not much chance Demons supporters will be allowed to travel to WA to see it. Talk about tough!

But that didn’t stop Dees supporters from quietly celebrating their last round win over the Cats and securing the minor premiership*.

It was one of those wins straight out of a movie script. Down by 40 points, they fought their way back to victory with a goal after the final siren by their captain, Max Gawn, who isn’t known for his kicking ability. He kicks the goal. Wins game. Curtain falls. Melbourne captain Max Gawn boots a goal after the siren to clinch victory for his team over Geelong and cement top place on the AFL ladder. Picture: Getty Images

It also sounded like a script for a cartoon. I wanted to capture the thrill that must have been felt by Melbourne supporters.

Due to the Covid lockdown in Victoria, there were no spectators at the game. There was a lot of that fake cheering on the TV broadcast, but the grandstands were empty.

I thought the lockdown should be part of the cartoon. Can you imagine, your team is playing the best it has in 57 years and you can’t go to see them play? 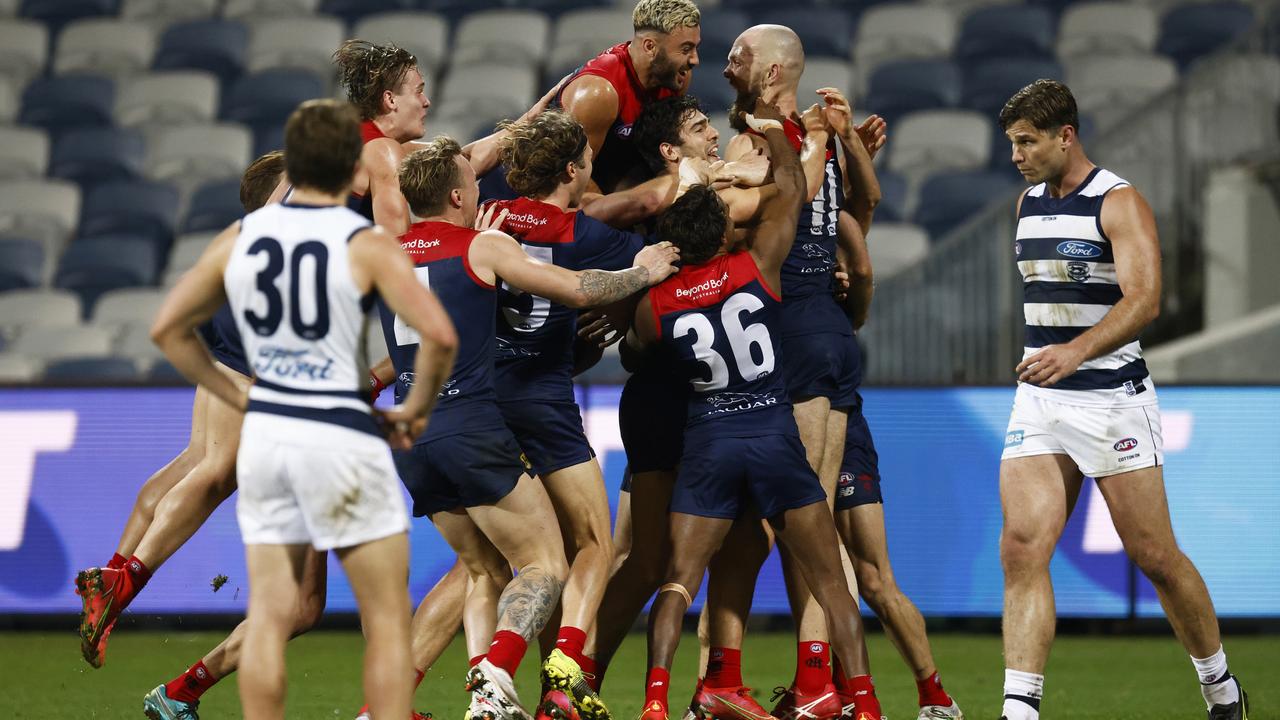 Melbourne players celebrate after their victory over Geelong in the last home and away game before the finals. Picture: Getty Images

Dees supporters are a great lot to satirise*. They love their expensive Range Rovers, skiing trips to Mount Buller, their MCC* memberships and a cheese platter while watching the game. I love to use these idiosyncrasies* in cartoons when I can.

I started to think about how difficult it must be for the fans not to be able to celebrate this success properly and so I went about creating a cartoon that involved a little bit of civil disobedience* by Dees fans. Not that they would ever do that of course!

The cartoon involves a family of Melbourne supporters in their Range Rover (naturally). They are decked out in club colours, with red and blue flags flying out of the windows. Mum has a cheese platter and they are celebrating the win by performing doughnuts* on the hallowed* turf of the MCG at midnight! A Melbourne fan enjoys a BYO cheese platter while watching the footy at the MCG. Picture: Reddit user KrumDiddly

Police are in attendance. Obviously arrests will be made, fines handed out. This family has broken multiple Covid laws, like the curfew* for a start.

But here is the humorous twist in the cartoon. One of the police officers watching the Range Rover do its circle work notes how long-suffering Dees supporters have been waiting since 1964 for their team to win a flag.

You would imaging that the other officer in the cartoon would say that was no excuse and the chief health officer’s orders must be obeyed! Arrest them!

But no, she simply says “Seems like a valid reason to be out.”

The officer’s droll* ‘nothing to see here’ reply is something football mad Victorians can probably identify with in these current crazy Covid times!

Being fed to the Tigers at the home of footy

CLASSROOM ACTIVITIES
1. Write a Description
Mark Knight writes that home schooling is one of the unique experiences we are having under Covid-19. Can you draw a cartoon that shows the funny side of home schooling?

2. Extension
Imagine that Melbourne actually gets to the AFL Grand Final. Mark Knight has been chosen to design the banner for the team to run through. What do you think his banner would look like? Design the banner.

VCOP ACTIVITY
Stretch your sentence
Find a ‘who’ in the cartoon. Write it down.