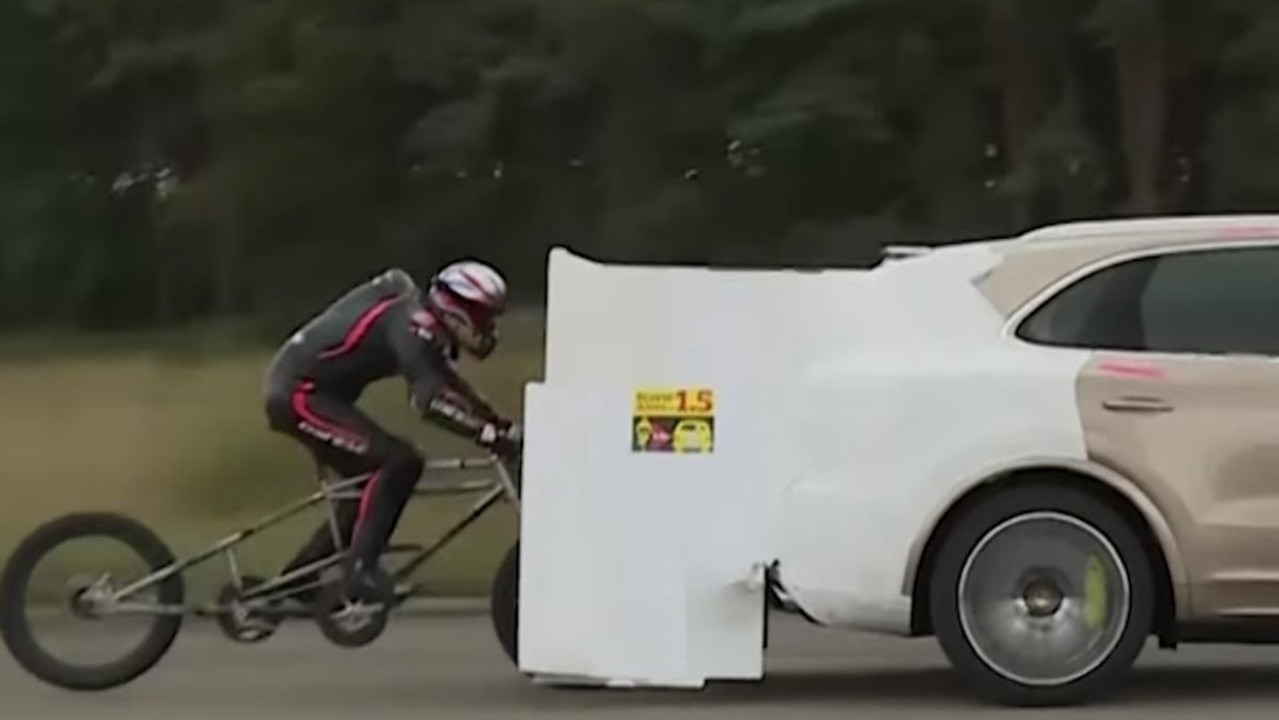 Neil Campbell's achieved a new world speed record for a man riding a bike. A windshield on the back of the car that towed him for the first part of the ride helped cut wind resistance. Picture: SkyNews

A cyclist has set a new world record by riding a bike at just over 280kmh.

Forty-five-year-old UK cyclist Neil Campbell set the record for the fastest speed on a bike by a male, beating the previous record for a man of 268.84kmh set by Dutchman Fred Rompelberg in 1995.

But Campbell still couldn’t beat female cyclist Denise Mueller-Korenek, who holds the overall world record with an average bike speed of 296.009kmh, which she achieved in September last year.

Campbell set his world record on a specially made bike that looks like a tandem* and was made with a combination of 3D-printed and motocross bike parts. Neil Campbell’s bike was towed by the car and then released to set the new world record for a man for the fastest motor-paced riding. Picture: SkyNews

Once the car and Campbell’s bike were travelling fast, the bike was released and was then timed at a top speed of 280.55kmh.

“I am thrilled and relieved, the team worked amazingly well,” Campbell told the Guardian.

The Porsche was modified with an attachment at the back that created a windshield for Campbell to ride in to cut wind resistance. A tailwind during the world-record ride also helped.

“Porsche spend millions testing their cars in a wind tunnel and we stick a big Tupperware box on the back of it!” he said.

He had planned to wear a parachute to help him stop safely but changed his mind before the ride.

He did wear a helmet and a kangaroo-skin suit that would inflate if he crashed.

THE FASTEST-EVER RIDE
US cyclist Denise Mueller-Korenek set a new world record for paced bicycle land speed on September 16, 2018. She is considered the fastest cyclist on Earth.

Her world-record ride was on the Bonneville Salt Flats in Utah, US, travelling an average of 296.009kmh on a custom-built carbon KHS bicycle behind a custom-built vehicle that helped shield her from air resistance. She is the only female in history to hold the world record.

VIDEO: US cyclist Denise Mueller-Korenek’s world-record ride in Utah, US in 2018

CLASSROOM ACTIVITIES
1. Speedy Bikes
Riding a bicycle at 280kmh seems pretty unreal to most of us, especially when you compare to a formula one race car at its fastest travels around 380kmh and they are in an enclosed car with safety gear! There are many scientific factors that allow a rider to go this fast as mentioned in the Kids News story.

Work with a partner to list all the aerodynamic, scientific and landscape features that allowed these bike riders to achieve the fastest speed on a bike world records.

Can you think of some other safety features they could incorporate into the ride or towing car without adding too much weight or bulk to themselves or their bike? Present your best idea to the class in a round table discussion.

HAVE YOUR SAY: Describe how you think you’d feel before, during and after riding a bike this fast? Would you try it if you could?
No one-word answers. Use full sentences to explain your thinking. No comments will be published until approved by editors.