Cricket fans get goosebumps from this goodwill gesture 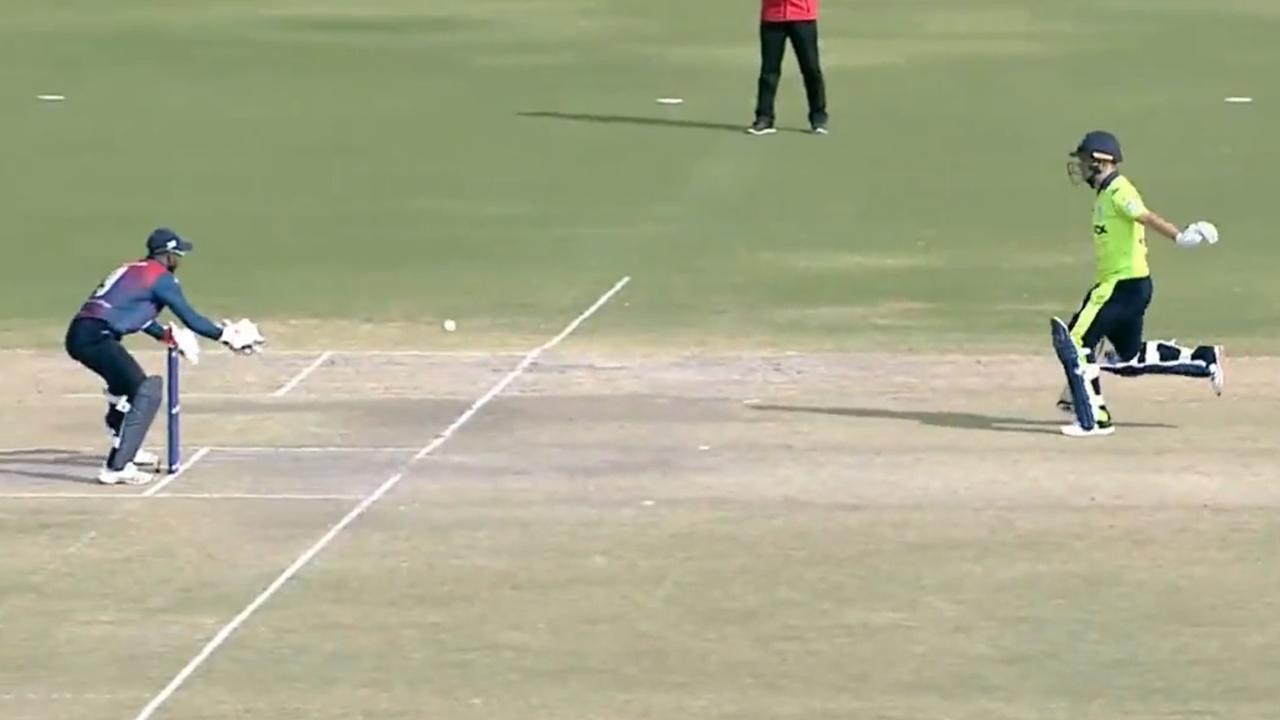 There was a memorable act of sportsmanship in a game between Nepal and Ireland at the T20 World Cup qualifiers.

The spirit of cricket is alive and well.

A touching act of sportsmanship in an international cricket game has warmed the hearts of fans around the world.

The impressive split-second decision was made during a recent match between Ireland and Nepal in a warm-up for the T20 World Cup qualifiers, which began on February 18 in Oman.

During the game, Irish tailender Mark Adair attempted a big heave into the on-side but barely connected with the ball, which ballooned across the pitch. An accidental collision between Ireland and Nepal players meant that the Irish nonstriker Andy McBrine had his run seriously impeded.

He took off for a quick single and Nepal’s bowler Kamal Singh Airee sprinted to collect the ball, only to bump into Ireland’s Andy McBrine, who was coming from the nonstriker’s end.

McBrine got tripped up and landed flat on his face. He was well short of the crease at the striker’s end when Singh Airee threw the ball to wicketkeeper Aasif Sheikh.

But in a gracious* act of sportsmanship, Sheikh opted not to knock off the bails* and run out McBrine, acknowledging the runner was seriously impeded* by tripping over the bowler.

The moment was lauded* by cricket fans all over the world, including former Tasmanian cricketer Jamie Cox, who tweeted: “How good is this. #spiritofcricket”.

“I don’t think they’re going to run him out here and that is brilliant to see,” the Irish commentator said, adding: “Aasif Sheikh, take a bow.

“We speak so often about where the spirit of cricket has gone in our game and you see it on show there, because Kamal Singh Airee has accidentally tripped up Andy McBrine and I’ve got goosebumps here in the commentary box because that was a touching moment.

“It was accidental but he could have run him out here and Aasif Sheikh has said ‘no’, he’s said he’s not going to do it because of the spirit of the game.

“That’s your nominee for the Spirit of Cricket Award for 2022.” Nepalese wicketkeeper Aasif Sheikh chose not to knock off the bails after McBrine’s run was interrupted on the pitch by Nepal’s bowler running into him.

In a new era of cricket where controversial* dismissals* are becoming increasingly common, it was a refreshing display of sportsmanship from Sheikh, and will be hard to top for this year’s ICC Spirit of Cricket Award.

Making the gracious gesture even more impressive was the fact it might have cost Nepal the game. Nepal fell 16 runs short of Ireland’s total in a low-scoring affair.

Batting first, Ireland posted 127 but Nepal could only manage 9/111 in reply. Commentators are already calling for Sheikh to be nominated for the ICC’s Spirit of Cricket Award in 2022.

The T20 World Cup qualifiers involve two groups, each featuring eight teams. The teams are competing to be the top two teams from each group that will progress to the T20 World Cup in Australia later this year.

Ireland and the United Arab Emirates were the two teams from this group to qualify to play in the World Cup.

Group B features Hong Kong, Jersey, the Netherlands, Papua New Guinea, Singapore, Uganda, the US and Zimbabwe. They will play their qualification matches in Harare, Zimbabwe, from July 11 to 17.

Who is this cricket star?

CLASSROOM ACTIVITIES
1. Justify your opinion
You may have heard the quote: “It’s not whether you win or lose, it’s how you play the game.”

That seems to be the opinion of many, given the praise received by Aasif Sheikh for his decision not to run out Andy McBrine. But what do you think?

Write a well-reasoned paragraph (or more) to explain whether or not you agree with the quote.

2. Extension
Can you think of another example of good sportsmanship that you have witnessed? Perhaps you saw it on television or at a game that you attended. Maybe it was an event that you were involved in.

Write down what happened and how the display of good sportsmanship made you feel.

VCOP ACTIVITY
What were they thinking?
If you had the opportunity to talk to one of the players involved in this act of sportsmanship, who would you talk to and what would you ask them?