Melbourne Cup winner Verry Elleegant won the race and the fashions, according to cartoonist Mark Knight.

The Melbourne Cup is known as “the race that stops a nation”. Victoria declares it a public holiday, and people around Australia stop work to watch the race or celebrate the day at a local pub or gathering.

Productivity* in the workplace goes way down on Cup Day and some note that 3pm on that first Tuesday in November would be a good time for a foreign power to invade our shores because all our eyes are fixed on 24 horses galloping over 3200m.

But this year as we re-open after Covid lockdowns, especially in Victoria, the Melbourne Cup was being seen as the race that restarts Melbourne and a nation. It was the first big event in the southern city that had the public attending in reduced numbers and signalled the start of our return to normality. The horses are the stars and deserve all the attention and I love to draw them.

Horses are like people, they have distinct personalities. When I draw them I sometimes like to give them human personality traits that befit their nature or status. This is called anthropomorphism.

Some of them are like rock stars, with a huge public following. Horses like Winx, Black Caviar, Makybe Diva and Phar Lap have all brought people in their thousands to racetracks around Australia over the years.

This year the race did not disappoint, and on a stunning Melbourne day we saw the mare* Verry Elleegant get up and beat the favourites to win. 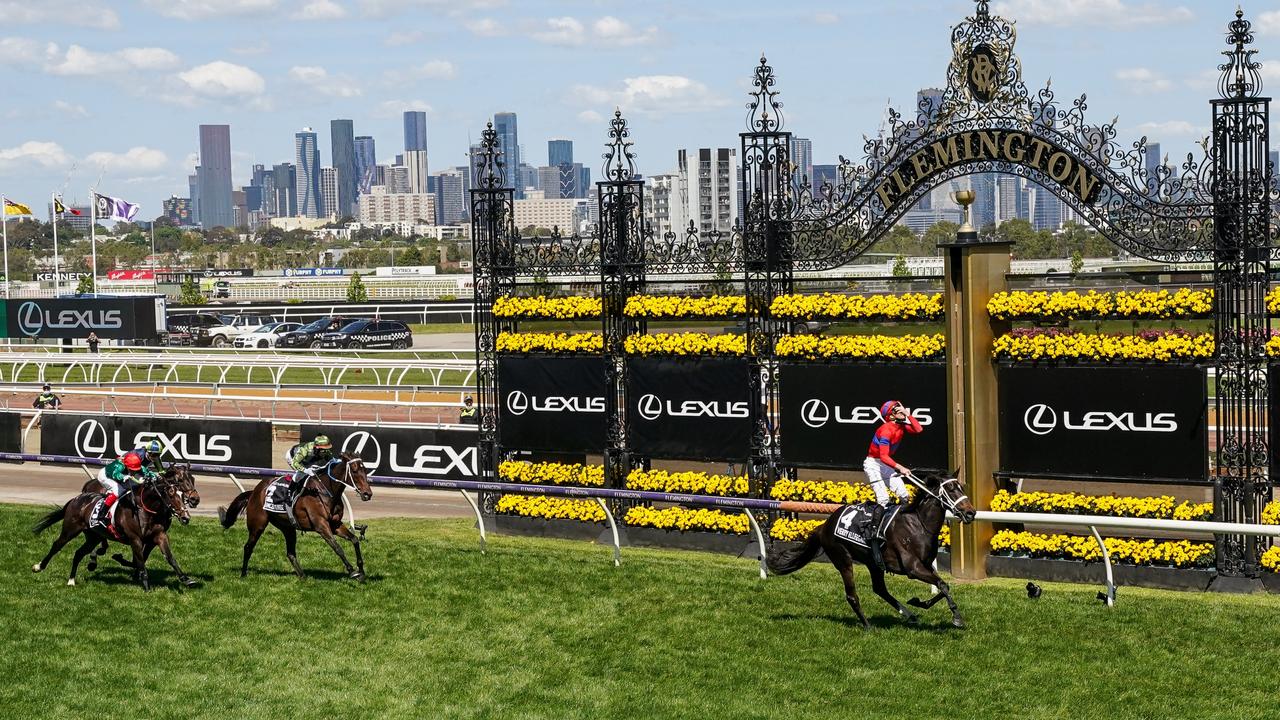 Verry Elleegant races to the front and passes the winning post in the Melbourne Cup at Flemington Racecourse. Picture: Getty Images

With a name like that I felt I had to draw something to do with the fashion aspect of the Melbourne Cup. Cup fashions almost attract more attention than the horses!

I started with the horse itself, a good looking black and brown thoroughbred* mare, its racing colours of red and blue and the jockey James McDonald.

Then I noted that the Fashions on the Field* were not being held this year due to Covid-19 restrictions, so that made me think that there was an opportunity for our horse to participate in the fashion stakes as well!

I started sketching Verry Elleegant in all sorts of outfits that you might see at the Cup, and finally I decided to settle on a frilly number in her red and blue racing colours. I added bloomers, the customary huge hat and finished her off with a set of high heels with bows, lip gloss and the now regulation eyelash extensions! I’m no fashionista*, but the pony looked “verry elleegant” indeed!

As she passes the winning post someone in the crowd declares she has not only won the race but the fashion stakes as well!

The Melbourne Cup is a handicap race. That means the better horses are given extra weight to carry to try to even up the field. Verry Elleegant carried a top weight of 57 kgs, which made her win all the more impressive. In my cartoon she has just run the 3200m in high heels; that’s quite a handicap as well!

Horse in a face mask another Covid normal?

VCOP ACTIVITY
Stretch your sentence
Select a “who” in the cartoon – the jockey or the horse. Write it down.