Mark Knight has tried to show in his cartoon how much Shane Warne would have loved his MCG memorial service.

The premature* loss of Shane Warne to a heart attack at the age of 52 shook Australians still reeling* from two years of Covid and more recently the devastating floods.

It was like the loss of a favourite son.

Warne, the talented, larrikin* boy from Blackrock who changed the game of cricket with his off-spin bowling, had left the stadium too early.

But SK Warne was never going to go quietly, and following a private funeral for his family, a public event was organised at the MCG for the public to bid him farewell.

I had been covering his loss in my cartoons and my editor asked me to do one final drawing on the memorial event. 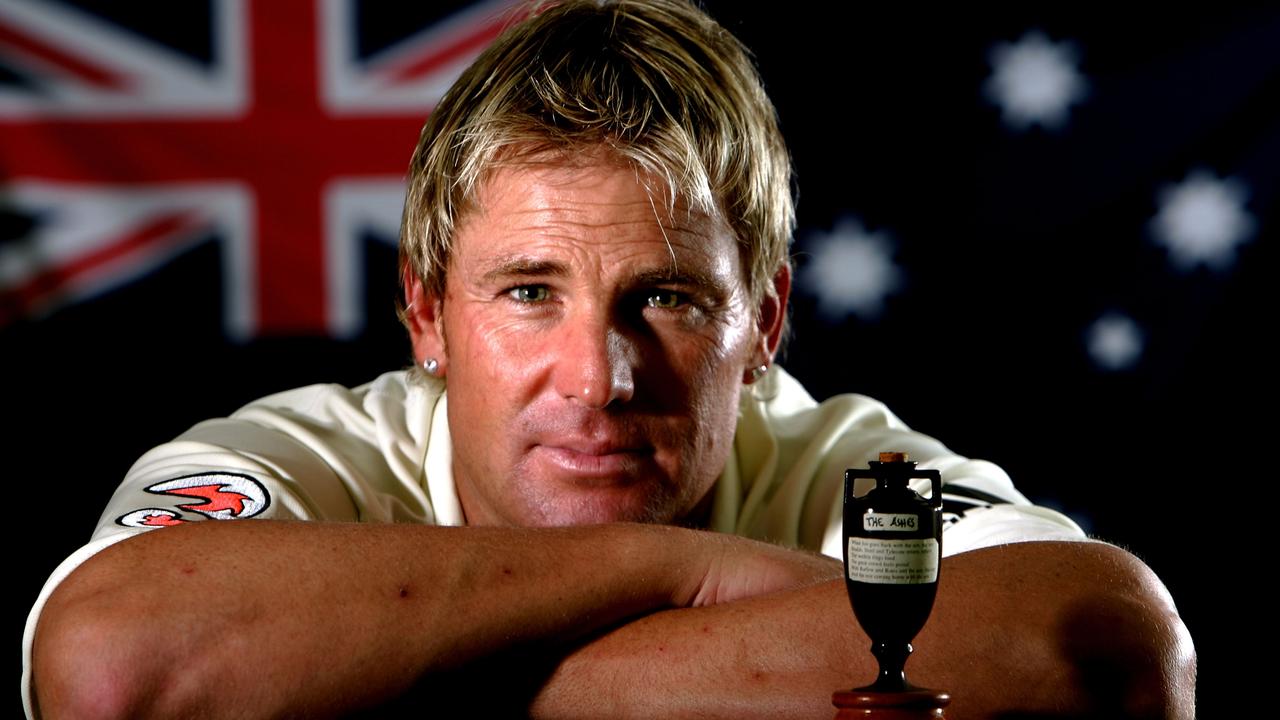 The death of Shane Warne, pictured here with the Ashes urn in 2006, shocked many Australians. Picture: Getty Images

I wondered what I could say after so much had already been said since his passing. I thought the cartoon would have to be something solemn* and yet simple.

After watching the memorial I came up with one clear conclusion: Warnie would have loved it.

That is what I wanted the cartoon to convey.

More than 50,000 people attended the MCG for the March 30 memorial. The service started with Greta Bradman, granddaughter of cricket legend Sir Donald, singing the National Anthem. 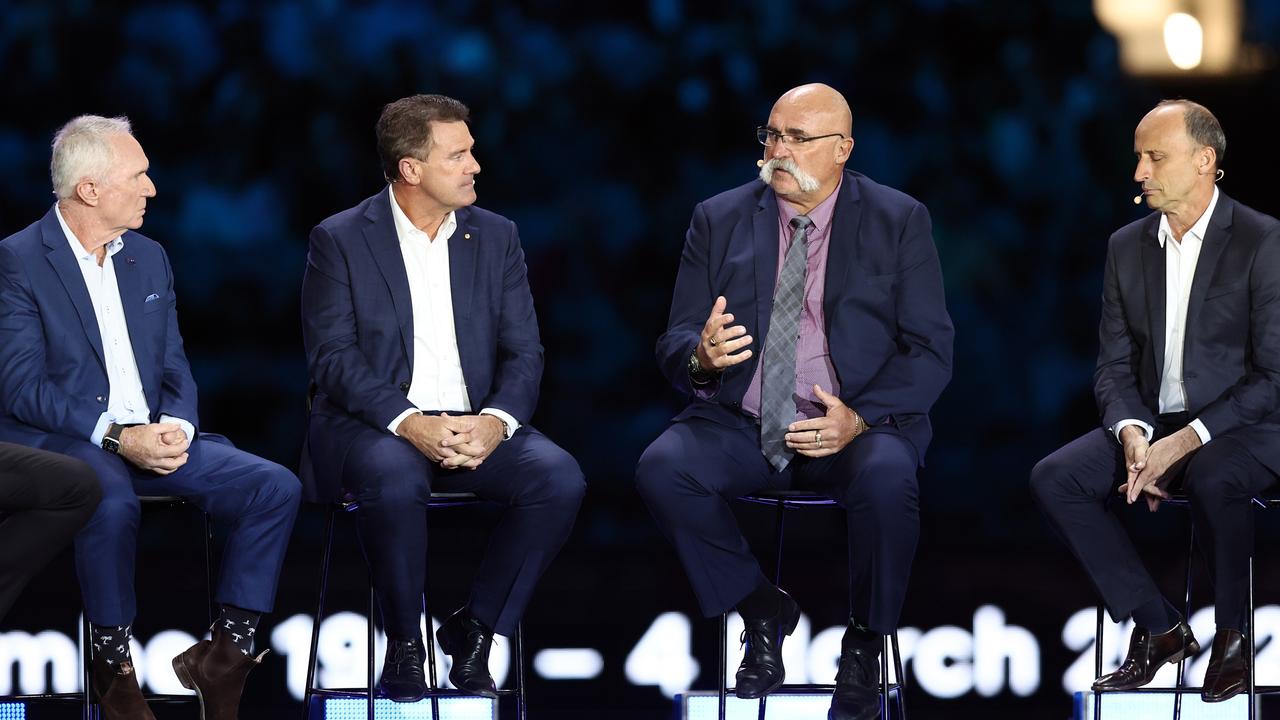 Then cricket colleagues and celebrity friends were invited on stage to tell stories about Warnie. Ed Sheeran was among the international singers who performed at Shane Warne’s memorial via video link. Picture: Ian Currie

His family courageously stood up and declared their love for him, and we even had “When the Saints Go Marching In”, the anthem of his beloved St Kilda footy team, blaring out at the end.

Shane Warne would have had a smile from ear to ear.

So how should I illustrate it? I thought about his statue on the MCG promenade* and how it had become a makeshift* shrine* to the leg-spinner, with people leaving flowers, cards and messages. Even some of his favourite beers were placed at his statue’s feet, like offerings to the gods. 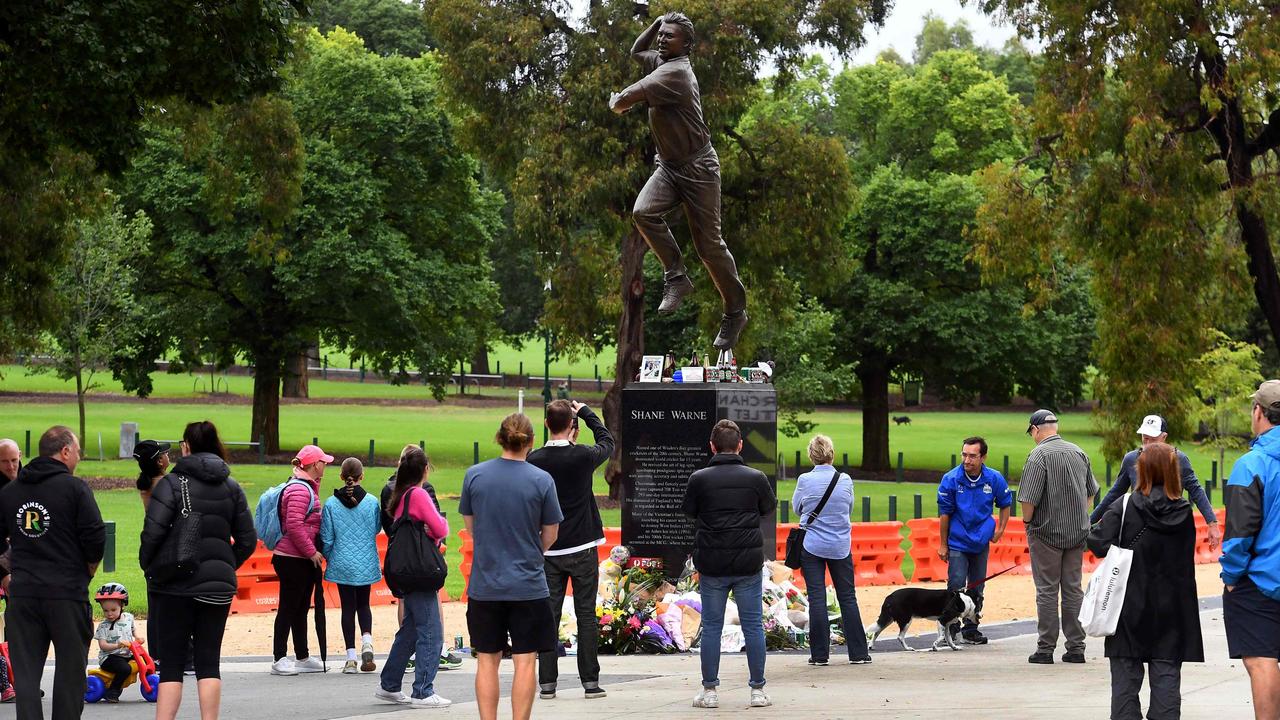 Shane Warne’s statue outside the MCG has become a makeshift shrine since his death. Picture: AFP

I wondered if the lifelike statue might actually reach down and pick up one of those beer cans! That thought gave me an idea!

I drew the promenade area outside the MCG. It’s night time and the memorial show is on inside the ground. We see its bright glow in the sky.

In the stillness, I drew Warnie’s statue, not in its familiar bowling pose, but sitting there with one leg up on the granite plinth* like someone might casually sit on a grassy hill watching a concert, or even cricket.

The statue is relaxed, laid back, enjoying one of the beer cans left for him. The cast bronze figure of Warne is looking up at the MCG, listening to the sounds coming from the arena. And he is smiling. Brooke, Jackson and Summer Warne unveiled the MCG stand renamed after their dad during the memorial service to celebrate his life. Picture: AFP

Warne takes his place beside the great Bradman

Using your sentences to help you, write a caption for the cartoon or some thought bubbles or quotes from the person in the cartoon that will make Mark’s meaning clearer for children or people who haven’t been reading the news this week.