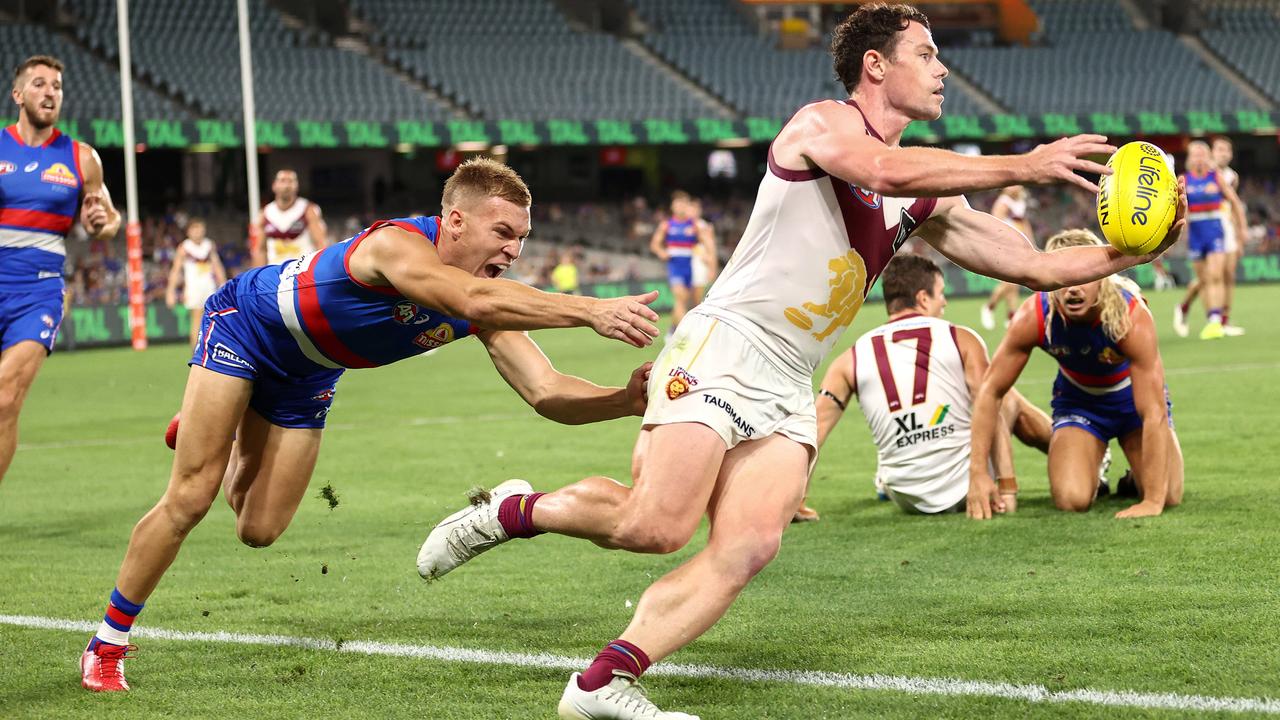 Brisbane Lion Lachie Neale tries to keep the ball in as he runs along the boundary line during a match against the Western Bulldogs at Marvel Stadium. A microchip in the ball would show if the ball was kept in or crossed the line. Picture: Michael Klein

Footy commentator and media personality Eddie McGuire wants the AFL to insert microchips into footballs to revolutionise* goal and boundary umpiring decisions in the way Hawkeye did for international tennis.

The NRL is already exploring the technology so it can monitor and penalise forward passes.

In the AFL, the chips would be able to check whether a ball hit the post, was touched or had gone out of bounds.

The result could be instantly revealed on the scoreboard, ending the need for lengthy delays while the footage is reviewed. 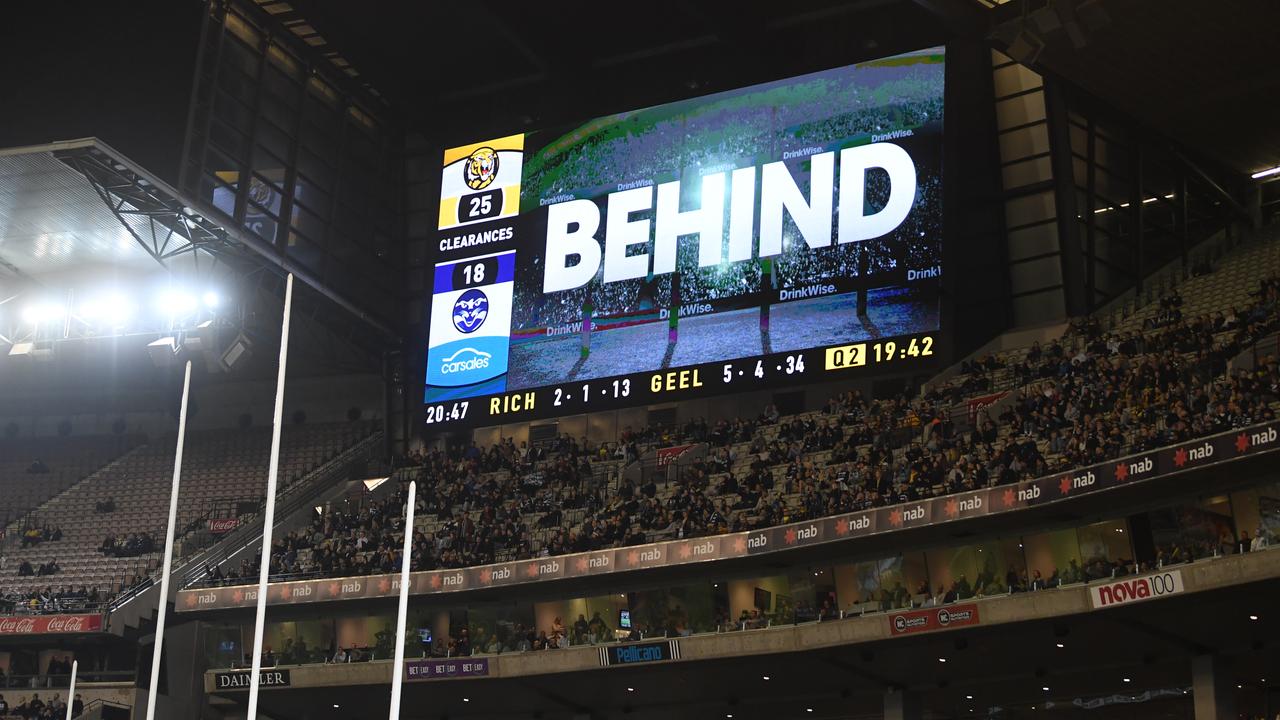 Under the AFL’s current score review system, the game is held up while footage is reviewed from several angles before the decision is displayed on the scoreboard, like this decision during a match between Richmond and Geelong at the MCG in 2019. Picture: AAP Image

The idea was one of hundreds floated at the SportNxt conference in Melbourne this week. 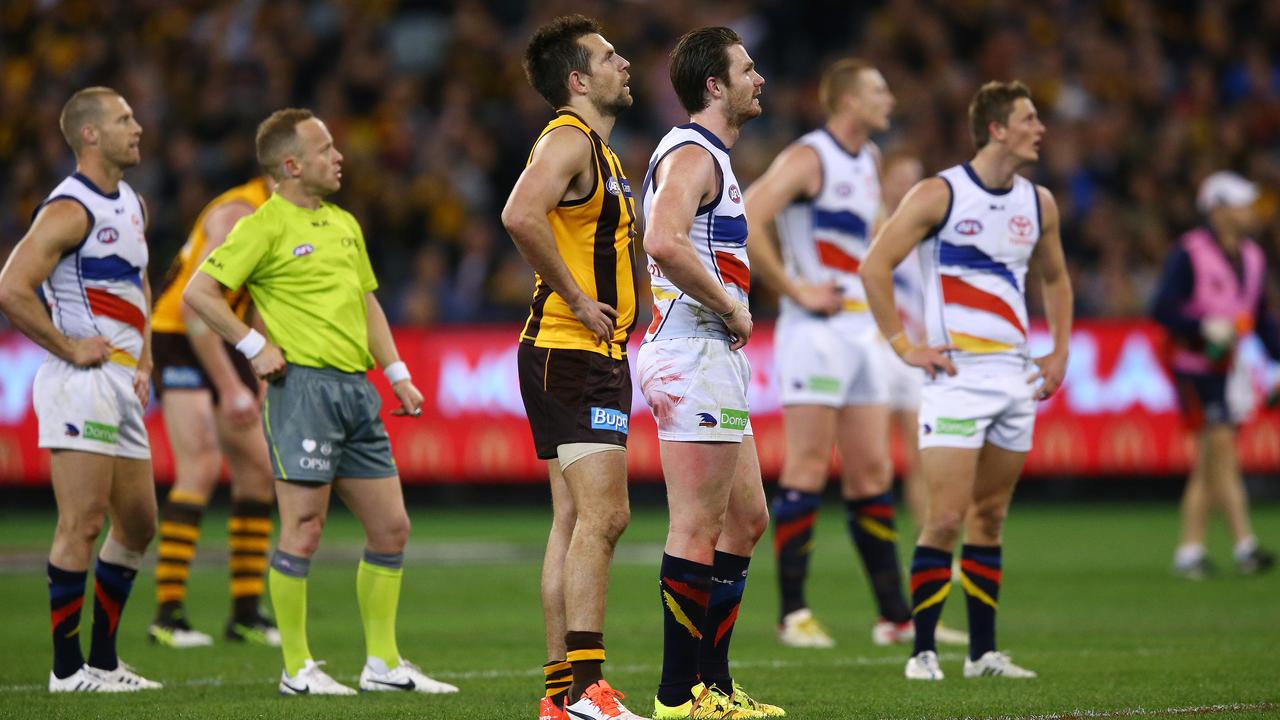 Adelaide and Hawthorn players stop and look up to the scoreboard for the results of a score review in 2015. The reviews can cause lengthy delays in play. Picture: Sarah Reed.

McGuire said sport needed to throw everything on the table and rethink how it was done.

He said that microchipping balls was just one idea that could future proof* the AFL.

“The NRL and the NFL are already looking at it,” McGuire said. “The chip goes into the ball and can pinpoint its exact location.

“When you’re watching the game, the screen could go red when the ball was out.

“People have always had the idea but the technology just hasn’t been there, but now it is.”

McGuire said all sports needed to reassess where they were headed, as younger people increasingly turned to gaming for entertainment.

He said stadiums needed roofs, including the MCG, where the newly-named Shane Warne Stand is set for a billion-dollar redevelopment. 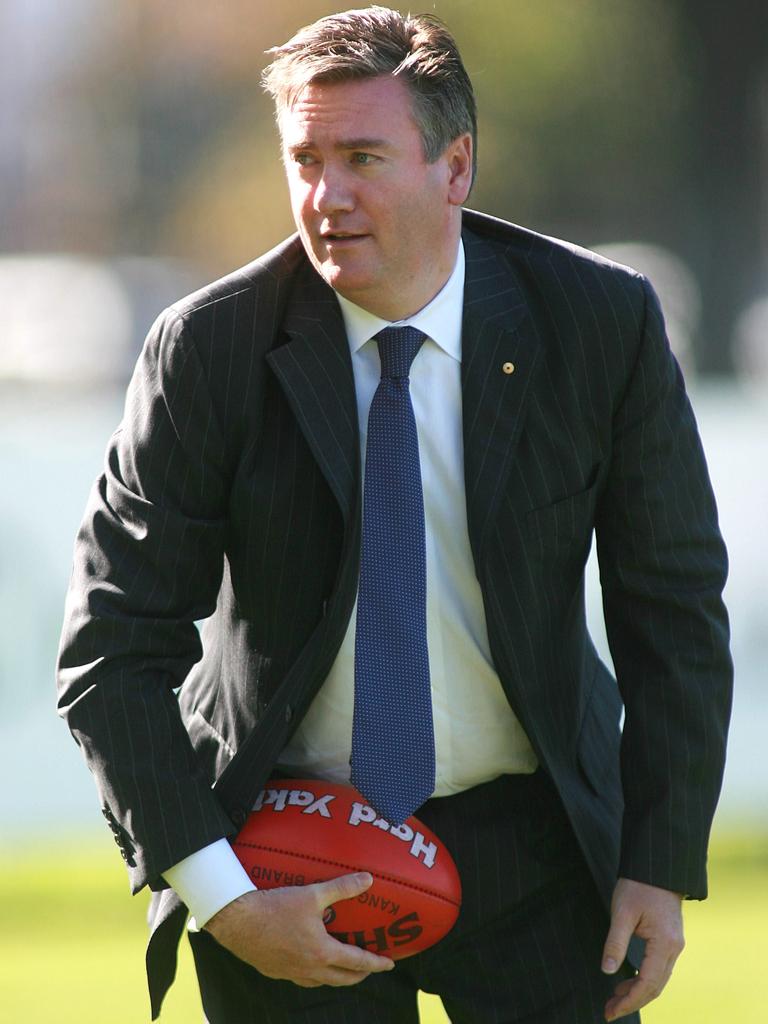 McGuire said he hoped the conference would allow the AFL, and all Australian sports, to look forward 50 years to find the ideas that worked to keep the codes relevant*.

The AFL has confirmed it has been approached about the microchip technology.

CLASSROOM ACTIVITIES
1. What do you think?
Imagine that you are an AFL umpire. Do you think that it’s a good idea to put microchips in footballs?

Write a letter to the AFL explaining your opinion on this.

2. Extension
Think about a problem in any sport that you think the SportNxt Conference should have talked about. This can be about a school or community sport. Write a letter to the organisers of SportNxt that describes the problem. Then explain some things that could be done to help solve the problem.

Will umpires be needed at all, or can the Hawkeye cameras capture the whole event and make the decisions from up in the commentator’s stands?

Write a letter to Eddie McGuire expressing your point of view.

Use your persuasive and emotive language to ensure you are clear.

Use a mix of simple and complex sentences to capture the audience’s attention.

Re-read, check and edit your letter before sharing it will a classmate.