AFLW Lions head coach Craig Starcevich delivers on his promise to “pull a shoey” at the request of Emily Bates after she won the 2022 AFLW Best and Fairest Award at the 2022 AFLW W Awards at Crown Palladium on April 05, 2022 in Melbourne, Australia. Picture: Daniel Pockett/AFL Photos/Getty Images

Brisbane Lions star Emily Bates has capped off a standout season by winning her first AFLW Best and Fairest trophy – and her coach has celebrated with a “shoey”.

Announced at a gala AFLW awards function at Melbourne’s Crown Palladium on April 5, the Lions vice-captain prevailed* by one vote over Crow Anne Hatchard after a nailbiting* count. 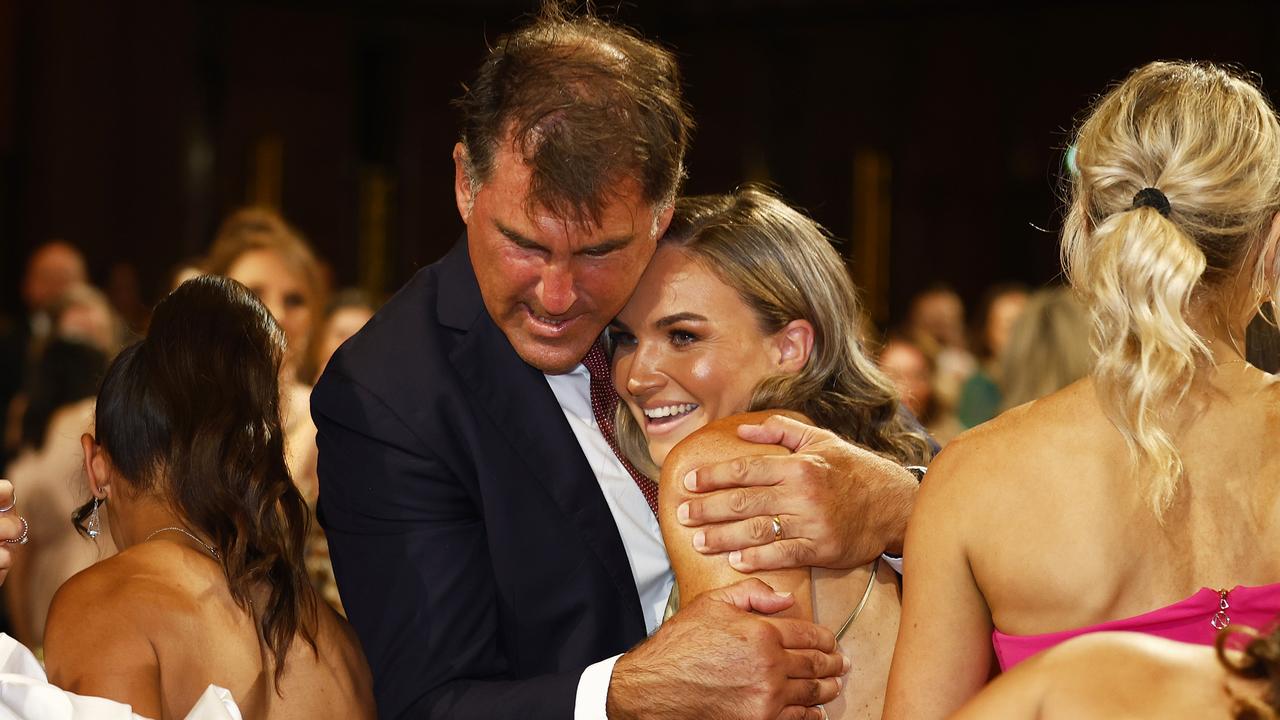 Emily Bates of the Lions is hugged by her head coach, Craig Starcevich, after winning the 2022 AFLW Best and Fairest Award during the 2022 AFLW W Awards at Melbourne’s Crown Palladium on Tuesday. Picture: Daniel Pockett/AFL Photos/Getty Images

Bates, a star midfielder, surprised the audience by revealing that coach Craig Starcevich had promised to do a “shoey” if she was named the competition’s best player.

Sure enough, Starcevich, who was sitting in the crowd, untied his black shoe, filled the footwear with juice and downed it to the delight of the Brisbane table and cheering crowd.

It took three votes in the final round for Bates to prevail over Hatchard with 21 votes in what was a thrilling finish.

“I’m in shock but I’m very happy,” the Queenslander said after accepting the award.

“I know my name had been bandied* around but I honestly didn’t expect that, I didn’t think I was a chance.

“Never in my wildest dreams did I think I’d win an award like this.”

She dedicated* the victory to her father, Lloyd Bates, who introduced her to football but never got to see her scale the heights of the AFLW. 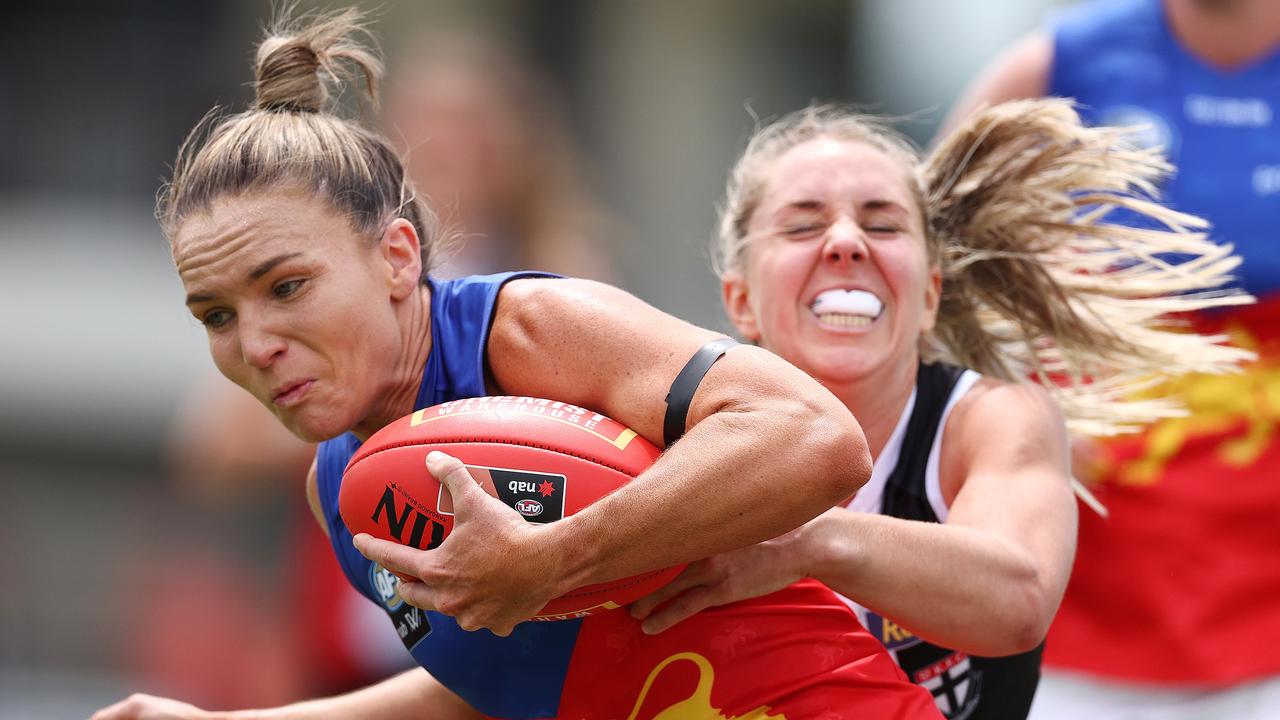 Emily Bates of the Brisbane Lions charges through the tackle of Jacqui Vogt of the St Kilda Saints in February. Picture: Michael Klein

“I just want to make mention of my dad, who got me playing footy when I was young,” she said.

“He’s the reason I started playing footy and I just followed his footsteps at Yeronga Football Club. I always had a footy in my hands and he coached the men’s team there.

“He passed away when I was 15 and never got to see me get drafted or anything like that, so this would definitely be for him and I wish he was here to see it today, but I’d know he’d be really proud.” 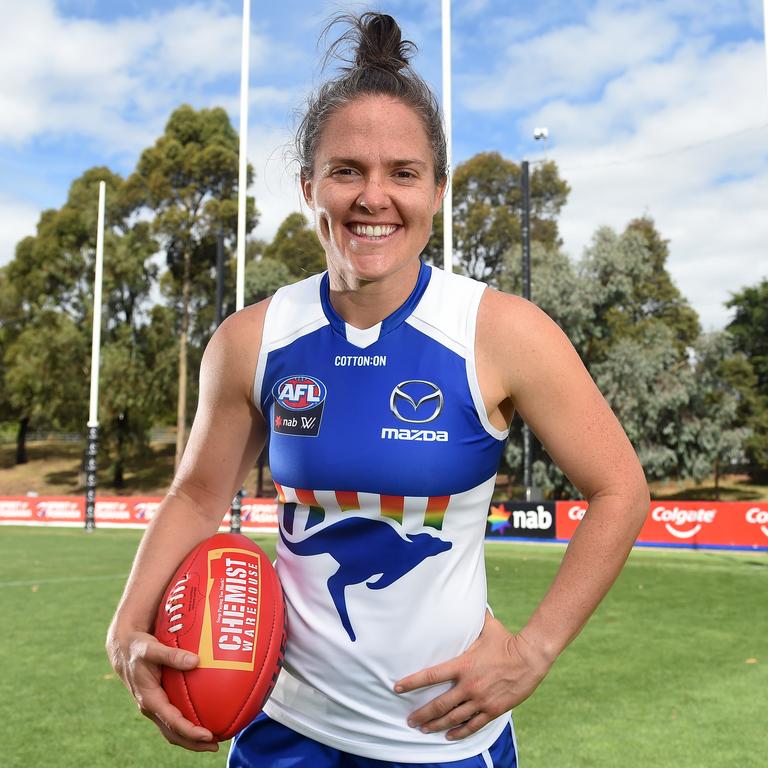 North Melbourne captain Emma Kearney made history after being named in the All-Australian team for the sixth year straight. Picture: Josie Hayden

Earlier in the evening, North Melbourne AFLW star Emma Kearney made history by being named in the All-Australian team for the sixth consecutive* year.

Kearney, who was named in the backline, has now made the team of the year every season in the competition’s six-year existence. Kearney was also named the team’s captain. Meanwhile, Carlton’s Mimi Hill was crowned the winner of the Rising Star award.

Fremantle’s Ebony Antonio won the goal of the year, while North Melbourne’s Tahlia Randall took home the mark of the year award for her spectacular grab in round six.

Buddy Franklin gets his ball back

CLASSROOM ACTIVITIES
1. Write a story
Write a story that starts with: “Never in my wildest dreams did I think I’d …”

2. Extension
Create a design for a new AFLW Best and Fairest trophy. You trophy should symbolise the qualities of the best and fairest AFLW players