Carrara Stadium lights up during a rehearsal for the Opening Ceremony. Picture: AAP

Billions of eyes will be on the Gold Coast tonight when champion hockey player Mark Knowles leads the Australian team into Carrara Stadium for the Opening Ceremony of the Commonwealth Games.

An estimated 1.5 billion worldwide audience will be treated to a celebration of Gold Coast beach life and indigenous* culture when dancing lifesavers take to the sand and a giant white whale floats across the stadium in the three-hour spectacular.

After years of fears about security and transport, and last-minute concerns about bad weather and unsold tickets, organisers say they are confident it will be “the best Commonwealth Games ever”. Lifesavers dance on the sand as part of the Opening Ceremony: Picture: Courtesy of Sunrise/Channel 7.

“With one day to go, we are ready,” Games Minister Kate Jones said yesterday.

“We will deliver the best Commonwealth Games ever, here on the Gold Coast, in Queensland.

“We have put all the planning in place to deliver what will be a great Games.”

A massive security operation will be around Carrara Stadium tonight where important guests including Prince Charles and Camilla as well as Prime Minister Malcolm Turnbull will be among the 35,000-strong crowd.

Lifesavers and Aboriginal performers will take centre stage at the ceremony, with the middle of the stadium turned into an inland beach.

Nippers clad in bright rashie vests and carrying matching pink rescue boards will lead the athletes from the 71 Commonwealth nations and territories into the stadium. Part of the smoking ceremony during the opening spectacular.

A didgeridoo* orchestra, ballet dancers from the famous Bangarra Aboriginal dance group and a traditional smoking ceremony will feature as part of a strong indigenous theme running through the ceremony.

A giant sculpture of famed white whale Migaloo, which passes the Gold Coast each winter, will also float into the stadium. When the Australian athletes walk into the stadium, they will be shown the way by champion hockey player and flagbearer Knowles.

It is a huge honour to be asked to carry the flag at either an Opening or Closing Cermony as it signifies you are held in high regard by your teammates and the country as a fair and worthy athlete.

Knowles has played more than 300 games for the Kookaburras (the men’s national hockey team), has won Olympic gold in Athens in 2004 along with three Commonwealth Games gold medals. Mark Knowles in action for the Kookaburras national hockey team.

The hockey champion has vowed our athletes will help restore pride in Australian sport after the cricket cheating scandal in which three Aussies admitted to ball tampering (see Kids News story under sport on this topic).

“It’s very important for us to uphold the standards and behaviours of what the Commonwealth Games is about,” Knowles said.

“He is a decent human being, he is modest, he embodies everything that is great about Australia,” Moneghetti said.

“He is an absolute rock and we think he will be an inspiring leader.”

Knowles, competing in his fourth Games, said he was shocked to be given the nod.

“As you get towards the back end of your career you realise these sorts of moments don’t come around that often,” he said. 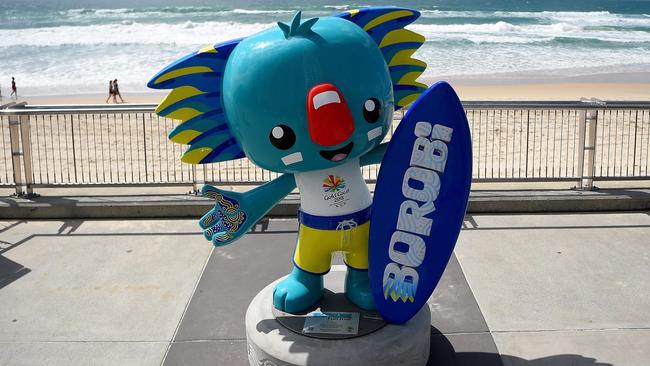 A statue of Borobi, the official mascot of the 2018 Gold Coast Commonwealth Games, on the Gold Coast. Picture: AFP

Look out for your official Commonwealth Games Pin Collection featuring Borobi the surfing koala in your newspaper from today and all this week. Ask mum and dad if you can start collecting.

indigenous: native to a particular place (Aboriginal in Australia)

redeem: make up for past faults

Chef de Misison: the person in charge of a national team

1. Symbols of the Gold Coast

Write down a list of symbols representing Australia, specifically the Gold Coast, and why you think they have decided to use these in the Gold Coast 2018 Opening Ceremony. Use this format — Symbol: Reason:

They bring together members of the Commonwealth of nations to compete on a level playing field in a spirit of friendship and fair play often referred to as the ‘friendly games’ (source: www.gc2018.com/history-games).

Why was he chosen for the job?

How does he feel about being chosen to be the flag bearer for the opening ceremony?

Extension: Define the qualities that make a good leader in sport.