THE Battle is about to begin.

Victoria’s two Super Netball teams the Vixens and the Magpies play this Saturday night in the season’s opening-round blockbuster*. Before they’ve even begun there’s a fierce rivalry* developing between the two local clubs. The teams have decided this game and all their matches from now on will be known as ‘The Battle’.

The new national competition, called Super Netball, starts on Saturday at 5pm with Swifts playing Giants in Sydney, followed by the Vixens and Magpies game at 7pm. At 7.45pm Firebirds play Lightning and at 12.30pm on Sunday the round finishes with Thunderbirds versus Fever in Adelaide. The 17-week competition includes eight clubs, 60 games and a TV deal with Nine and Telstra that promises a big, new future for one of Australia’s most popular team sports.

The Vixens, Melbourne’s only elite* netball team since 2008 until the introduction of the Collingwood-backed team for this year’s first-ever season, have been working with the Magpies on a campaign* to promote their new rivalry. Even before a match has been played, the teams are hopeful their on-court battles can eventually build into a sporting rivalry as strong as that in the AFL between Collingwood and Carlton, Melbourne Victory and Melbourne City in soccer and the Diamonds and Silver Ferns in international netball.

At the least, they see it as becoming the biggest rivalry in Australian netball.

Seeking to give the game an identity*, ‘The Battle’ was chosen not only for its ferocity*, but it was also thought to tie in well with the league’s “all on the line” campaign.

While the Melbourne Vixens will now have to share the netball spotlight with Magpies, Vixens’ captain Kate Moloney said her team welcomed the competition from their new cross-town rivals.

“I think it’s really exciting for netball and netball in Melbourne to have another team,’’ Moloney said. 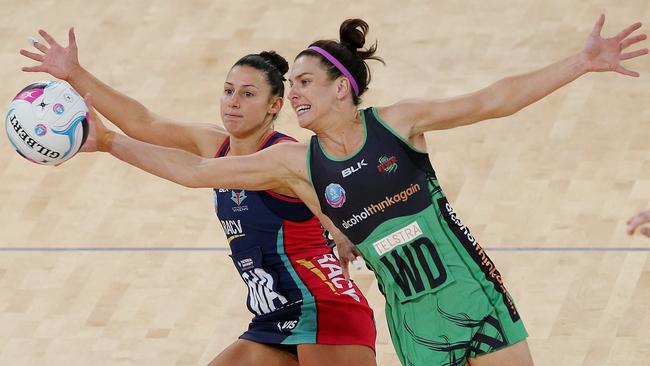 “It’s been a long time since we’ve had two teams in Melbourne and I can’t wait to watch that rivalry grow over the next few years.

“I hope ‘The Battle’ is something that can catch on and the rivalry just continues to build over time.”

Magpies’ joint vice-captain Ashleigh Brazill said the rivalry will be great for netball.

“Previously*, it didn’t matter what state you were from, that’s the team you’d go for. Now you actually have to choose a side … now there’s two teams in Melbourne so you have to pick a side to cheer for.’’

The teams will meet again in round seven at Hisense Arena.

identity: a recognisable style or way of being

Create a poster (either on paper or using a suitable computer program) to advertise ‘The Battle’. Your poster should be eye catching and the words and graphics included should convey the following important details:

– that this will be an exciting game between two big rivals

Extension: Write a radio advertisement to promote the game.

Activity 2: Be the Coach

Think about the rules of netball and the skills required. Draw a diagram of four simple practice drills a netball team could do to refine their skills. Write a short, simple sentence to go with each one to explain the drill.

Extension: Brainstorm a list of encouraging things you could say to motivate your netball team.

Extension: Can you make slogans for all the teams mentioned in this article?

Great comments go up on Kids News for others to see!