Batmobile provides a stylish ride to AFL Grand Final in Perth, but not everyone can get on board AFL chief executive Gillon McLachlan holds the 2021 premiership cup as he heads west in the batmobile in Mark Knight’s cartoon.

When the captain of the winning team holds the AFL Premiership Cup above his head on Grand Final Day, there can be no better moment of sporting elation* for player and supporter. Standing with the cup aloft in the centre of the MCG, our modern day Colosseum*, packed with around 100,000 spectators, the roar and the spectacle are something to experience.

But this year on Grand Final day, as it was last year, there will be no crowds, no players and no roar.

It will be just a few seagulls walking around on the hallowed* turf looking for an old chip or two. The stands will be silent due to Victoria’s Covid-19 lockdown.

The Grand Final has moved to Perth this year. Gasp!

The news that Melbourne would lose the Grand Final again was a dagger to the heart of sports mad Melburnians, particularly those who follow the Melbourne Demons who are favourites to win the flag this year.

The MCG is the home ground of the Demons and their fans have been waiting 57 long years to see them win a Grand Final.

A cartoon was in order to sum up this catastrophic* event, yet more bad news for Melbourne, the lockdown capital of Australia. 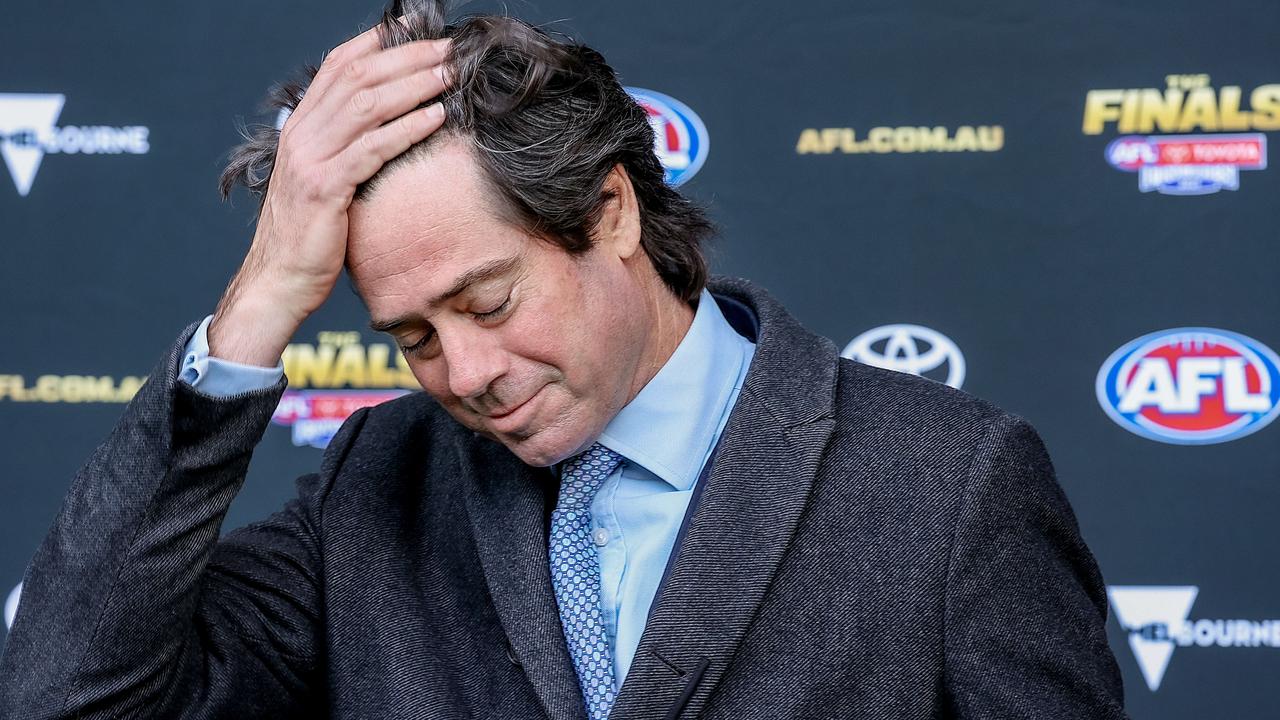 AFL chief executive Gillon McLachlan at the announcement of the relocation of the 2021 Grand Final to Perth. Picture: Ian Currie

With the Grand Final moving to Western Australia I had visions of the AFL boss, Gillon McLachlan, sitting at the WA border with the Premiership Cup begging to be let into the state, such are the restrictions on interstate movement these days. The WA Premier, Mark McGowan, has already refused to let Eddie McGuire enter!

Then I thought about what a big win it was for the state of WA to host the Grand Final and how they would welcome it with open arms.

I wondered how to illustrate this? I remembered one of the great moments in AFL history, and it was one of the rare occasions when the Grand Final was not played at the MCG. It was held at Waverley Park in 1991 when major construction work made the MCG unavailable.

On that day the Premiership Cup made a very special, even hilarious, entry to the stadium. It was not on a carriage pulled by white horses or in a Rolls Royce Limousine. It arrived in the famous “batmobile”, a blue coloured backyard version with cardboard wings and red velour seats. It was so bad that it became a cult* classic!

I thought that this was the vehicle that the AFL chief and the Premiership Cup should arrive in Perth in! The batmobile made an appearance on The Footy Show finale last year, with host Billy Brownless singing in the back seat as the car arrived. Picture: Picture: Fiona Hamilton/Channel 9

I sketched the AFL batmobile on a mission, travelling at speed through the red desert on its journey from the MCG over the Nullarbor Plain to Perth. The AFL chief sits on the plush red velour seats, holding the Cup. What an arrival it will be!

I needed to comment on the sad fact that Melbourne Demons supporters would not be able to go if they made the Grand Final. So on the side of that long desert highway a Dees supporter stands forlornly* trying to thumb a ride*.

But the Cup does not stop.

CLASSROOM ACTIVITIES
1. Write a Description
How do you think the Premiership Cup should enter the stadium in Perth? Write a plan for a special ceremony for this. Include ideas for music and what the Cup will be carried on as it enters the stadium. Can you come up with a better idea than the AFL Batmobile?

2. Extension
Imagine that the AFL Batmobile stops to pick up the lone Dees supporter. Write the conversation that you think the supporter and the AFL chief executive would have about the 2021 Grand Final.