A record-breaking knock* from superstar Alyssa Healy has helped Australia snatch the Women’s One Day International (ODI) World Cup trophy back from England and finish a dominant* tournament with a 71-run win.

After coming back from a 0-3 start, England had been hoping to write the final chapter in a World Cup fairytale at Christchurch’s Hagley Oval in New Zealand on April 3. 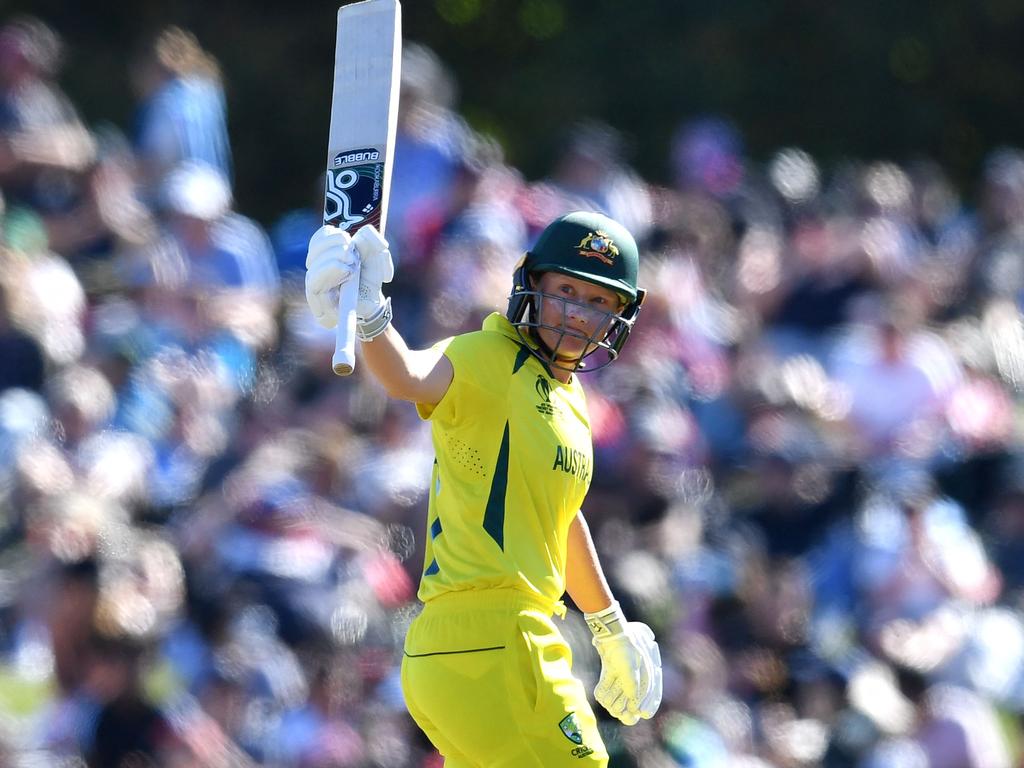 Led by Nat Sciver (148*), the English batting order launched an unlikely comeback bid, but there was no questioning that the undefeated Aussies deserved to taste World Cup glory, especially after the performance they produced on the biggest stage.

Healy posted a century in the semi-final against the West Indies but saved her best for the last match of the tournament, quite simply humbling* the English bowlers.

Her 170 runs from 138 deliveries was the biggest individual score ever recorded by a man or woman in an ODI World Cup final and helped Australia to a team record: the highest ever total in a Women’s World Cup final (356).

Back from Test duty in Pakistan, men’s cricket superstar Mitch Starc watched on as his wife rewrote the history books for fun; prior to Sunday, no woman had ever scored two centuries or 500+ total runs in a World Cup campaign.

Healy did both and also broke the record for most boundaries scored in a Women’s World Cup innings. Records tumbled thanks to Alyssa Healy’s blistering work on the bat. Prior to Sunday, no woman had ever scored two centuries or 500+ total runs in a World Cup campaign. Picture: Hannah Peters/Getty Images

On any other day, Rachael Haynes (68) and Beth Mooney (62) might have grabbed the headlines but the pair’s stellar* knocks were completely overshadowed* by their teammate’s.

“That was pretty special from our group,” Healy said afterwards.

“So to finally get over the line was pretty cool.”

The English won the toss and sent Australia in to bat — a decision they would have regretted as Sunday’s final wore on.

The opening partnership of Haynes and Healy surged past 100 and the English frustration was palpable*. 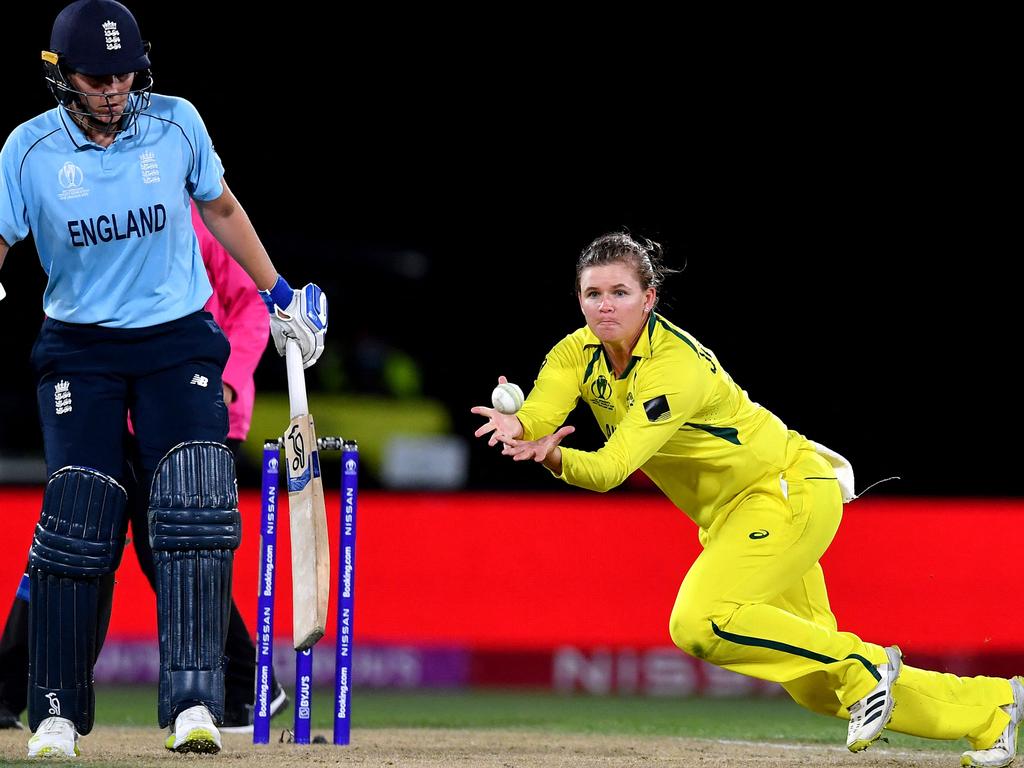 England’s Nat Sciver watches as Australia’s Jess Jonassen takes a successful catch on her own bowling to dismiss Kate Cross during the match. Picture: Sanka Vidanagama/AFP

Dani Wyatt and Natalie Sciver each dropped manageable catches that could’ve given the English the breakthrough they so desperately needed.

Instead, Haynes and Healy combined for 160 runs before Haynes misjudged a Sophie Ecclestone delivery that was caught at point by Tammy Beaumont.

Healy approached her 100 cautiously* but let loose from the 40th over, scoring a staggering* 45 runs from her last 19 deliveries.

The record-breaking innings finally came to an end when Healy ventured out of her crease to play an Anya Shrubsole delivery, only to be stumped by her rival wicketkeeper Amy Jones.

She left the ground to a standing ovation. The Christchurch locals knew brilliance when they saw it. 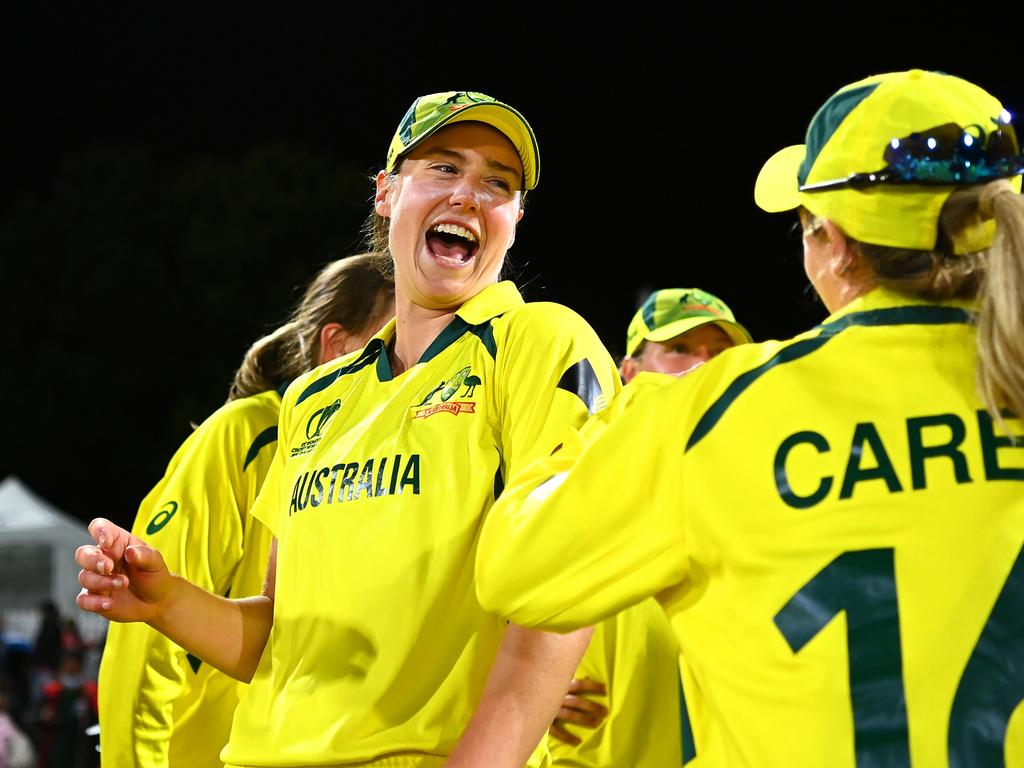 “Today was just truly wonderful, Ellyse Perry said of her teammate’s innings. “For ‘Midge’ (Healy) to do what she did was just amazing to watch. To finish the way we did today, from an Australian perspective, was just awesome.”

England needed better than seven runs an over and when Megan Schutt claimed Dani Wyatt (4) and Tammy Beaumont (27) early, that task became even more daunting*.

But the challengers weren’t going down without a fight. Nat Sciver was England’s best batter the last time these sides met and things were no different on Sunday.

She brought up her half-century, then her century to prove herself as England’s best batter of the tournament, sending a warning shot to Australia that the contest was far from over.

In the end, it wasn’t Australia’s gigantic total that proved the issue for the English, but their own early loss of wickets.

Sciver also lacked a steady partner-in-crime*. As her teammates began to fall around her, the Aussies knew they were home.

A farewell Warnie would have loved

What was Alyssa Healy’s tally and from how many balls?

Who delivered the ball that ended Healy’s record-breaking innings?

What does Healy have in common with the English player who stumped her, Amy Jones?

What titles does Australia currently hold in international cricket?

CLASSROOM ACTIVITIES
1. World Cup winners
Design a T-shirt to commemorate the Australian Women’s one day international World Cup victory. Your design could include who the opponent was, scores etc.

2. Extension
What records did Alyssa Healy break in this World Cup final?

Why is 170 runs so impressive?