Australian Peter Bol leads the pack in the final of the men’s 800m. Picture: Alex Coppel

Peter Bol might not have won a medal, but he earned the admiration* of the nation with his daring* run in the men’s 800m final in Tokyo.

Bol, who arrived in Australia as an eight-year-old after his family fled war-torn* Sudan, finished fourth in the race in a day that Australian athletes experienced the highs and lows of Olympic competition.

The highs came with a gold medal for sailors Mat Belcher and Will Ryan in the men’s 470 class and bronze medals in the men’s cycling team pursuit and to Kareena Lee in the women’s 10km marathon swimming.

Bol, who holds the Australian record for the 800m, took the lead early in his race on day 12 of the Tokyo Games.

He stayed in the lead until the final bend but was overtaken on the home straight with about 60m to run. Peter Bol was overtaken in the home straight of the men’s 800m final at the Tokyo Olympic Stadium. Picture: Adam Head

Bol showed tremendous heart to hang on to finish one spot out of the medals in a time of 1min 45.92sec.

“I put myself in with every chance,” Bol told Channel 7 after the race. “I came here to win and that’s what I did, I tried to win. I came up short but we are in an Olympic final and there is more to come.

“I mean, I’d be lying if I said I’m pretty happy right now. The goal was to win. At the same time, I think today I didn’t know if I was going to win but I knew one thing for certain, that the whole of Australia was watching and that carried me on.

“I loved that part about it. I’m grateful to Australia, I’m thankful to everyone in Australia. We’re human at the end of the day. We inspired the whole nation. That’s the goal.” Peter Bol came to Australia at the age of 8 after his family fled war-torn Sudan. Picture: Getty Images

Bol was attempting to become the first Australian man in 50 years to win an Olympic track gold medal.

He was the first Australian to make the men’s 800m Olympic final since Ralph Doubell won gold in the event in 1968.

Channel 7 commentator Bruce McAvaney was full of praise for Bol.

“He has run magnificently. We are all so proud of him,” he said.

“This is the bit I love just as much. He can’t win the medal, but he wants to finish fourth. He wants to get the highest placing possible. That’s the pride of a champion. We saw one tonight.”

Earlier, Belcher and Ryan claimed Australia’s 15th gold medal in Tokyo and our second in sailing. Mat Belcher (left) and Will Ryan celebrate winning gold in the men’s 470 class on day 12 at the Tokyo Games. Picture: Getty Images

Like our other sailing gold medallist Matt Wearn, who won the men’s laser event back on day nine of competition, Belcher and Ryan had performed so well in their earlier rounds, they simply had to complete the final race without being disqualified to officially take the gold in the 470 class.

The pair played it safe early, but then went into racing mode and crossed the finish line in their final race in first place. 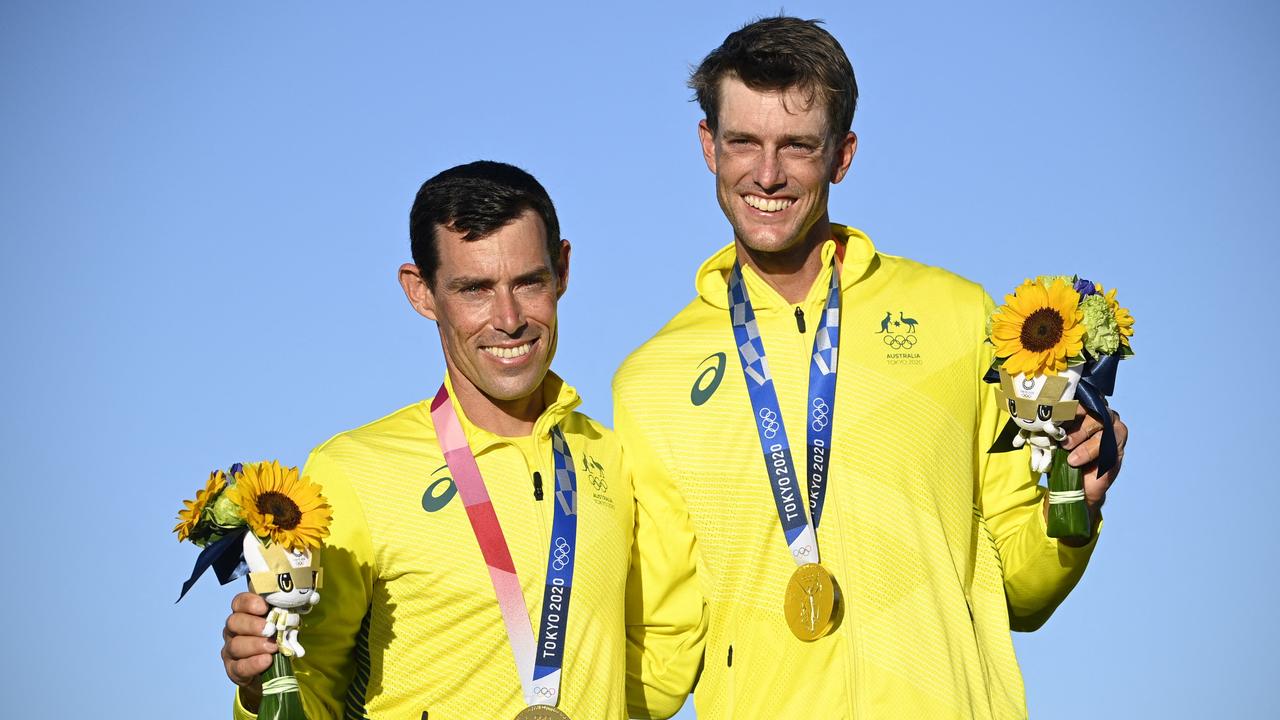 Mat Belcher and Will Ryan collect their gold medals after their victory in the men’s 470 class. Picture: AFP

The victory made Belcher the first Australian skipper* to win two Olympic gold medals. His first was at the London Games in 2012.

The gold medal also added to the silver he and Ryan won together in Rio in 2016.

But there was also heartbreak for Aussie athletes on day 12. Genevieve Gregson suffered a torn achilles tendon* after a horrible crash at the last water jump in the 3000m steeplechase final. She was placed in a wheelchair and taken off the track for medical attention.

The Tokyo Olympics also came to an end for our women’s basketballers, the Opals, who were outclassed by the US team in the quarter-finals, going down 79 to 55.

The US team hasn’t lost at the Olympics since 1992 and is hot favourite to win gold in Tokyo too.

CLASSROOM ACTIVITIES
1. Flags and National Anthems
Draw and colour the national flags of the three placegetters in the 800m final.

Write out the words of the gold medallist’s national anthem. (A translation if the anthem is not in English.)

In one sentence, state the main idea of that country’s national anthem.

VCOP ACTIVITY
Walking in Their Shoes
The Olympians who have headed to Tokyo for the Olympic Games have been training tirelessly to represent Australia. Imagine how they must feel as their dreams of competing in the Olympics are about to come true.

It’s time to walk in their shoes and imagine what they must be thinking and feeling as they continue to prepare.

Write a descriptive piece recounting your experiences. You may like to include: training in your chosen sport, being selected for the Olympic team, travelling to Tokyo, life in the Olympic village, the moments before, during and after your event.