Ricciardo, who started in pole* position, was in control through the first part of the race but then had to limp around the track with an engine problem for a staggering* 60 laps to make his seven-second win all the more incredible.

“I felt a loss of power and thought the race was done,” admitted Ricciardo, who claims he suffered the issue on Lap 18 when four seconds ahead. “I was only using six gears.” Jy Simpkin of the Kangaroos gets his handball away while being tackled by Andrew Brayshaw of the Dockers. Picture: Getty

AFL: North Melbourne coach Brad Scott doesn’t want his players talking finals just yet after the Kangaroos moved to fifth on the ladder after yesterday’s 28-point win over Fremantle.

“Fans and media can dream, but we just work really hard on what we’re doing,” Scott said.
Melbourne were 91-point winners over Adelaide in Alice Springs. It was the first time Melbourne has won back-to-back games by more than 90 points in the club’s history.

West Coast youngster Willie Rioli is likely to be sent to the tribunal for his friendly tap on umpire Ray Chamberlain’s backside in the Eagles’ win over Hawthorn at Etihad Stadium. NRL: NSW and Queensland will both see a ‘changing of the guard’* in State of Origin when teams are announced today for next week’s first game. Blues coach Brad Fittler will call in a record 11 debutants* for the June 6 clash, as NSW tries to stop 12 years of Origin losses.

Queensland will have major changes in the important positions of halfback and hooker after the retirements of Cameron Smith, Cooper Cronk and Johnathan Thurston. St George Illawarra’s Ben Hunt is expected to earn his first Origin starting spot as the new No.7 with Andrew McCullough likely to be the new dummy-half. Watson, 36, was struggling with a hamstring injury but managed to hit eight sixes and 11 fours as Chennai finished on 2-181-2 crush their opponents by eight wickets.

Meanwhile, Cricket Australia chief executive James Sutherland said there was no real evidence linking Australian players to corruption* claims made in a TV documentary against two unknown players, but said CA would co-operate with any official investigation. 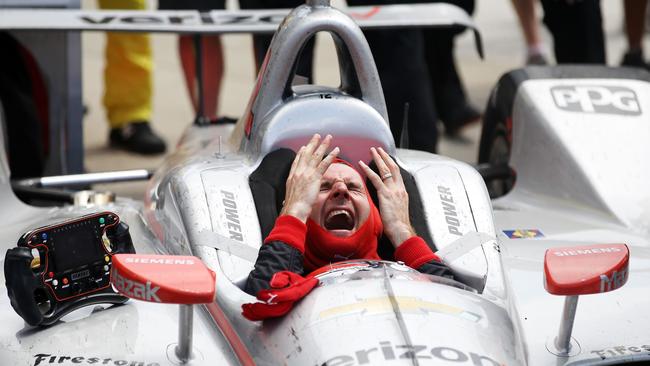 Will Power of Australia. Picture: AFP

MOTOR SPORT: Australia’s Will Power won the Indianapolis 500 in America yesterday to become the first Australian to win the race called “The Greatest Spectacle in Racing”.

Power was screaming with excitement into his radio microphone as he passed the chequered flag* in the famous race on his 11th attempt. He won in scorching hot conditions that tested many drivers.

“Man, I just can’t believe it,” said Power. “I honestly was beginning to believe I was never going to win this race.” CYCLING: Chris Froome’ won his third straight Grand Tour race yesterday to cement* his place in cycling history, but the extraordinary way in which he won this year’s Giro d’Italia, makes it far more impressive.

The Kenyan-born British rider bounced back from two early crashes to race into the lead two days from the end with an 80km solo* attack in the three-week race’s toughest stage.

“The manner that he won this race was absolutely incredible. It’s what bike racing is all about — it’s exciting, it’s spectacular,” Team Sky director Dave Brailsford said.

changing of the guard: when something new replaces something else

1. Daniel Ricciardo has engine trouble for how many laps during the Monaco GP?

2. Melbourne’s 90-point win yesterday broke a club record. What was it?

3. Who is expected to be the Maroons new Origin dummy-half?

4. What was Shane Watson’s unbeaten score in the IPL final?

5. Will Power won the Indy 500 overnight. How many Aussies have won it?

IN ONE SENTENCE, TELL US WHICH SPORTS STORY YOU LIKED

Please explain what you enjoyed and use lots of adjectives.