Australia has won its fifth women’s Twenty20 World Cup, destroying India by 85 runs in front of 86,174 fans at the MCG.

The Australians began the tournament in shaky style, but saved their best for last with an almost perfect performance against a shell-shocked* Indian side playing in their first final.

Alyssa Healy and Beth Mooney powered the Aussies to 4-184 — the best total in a Twenty20 World Cup final — after captain Meg Lanning chose to bat first. 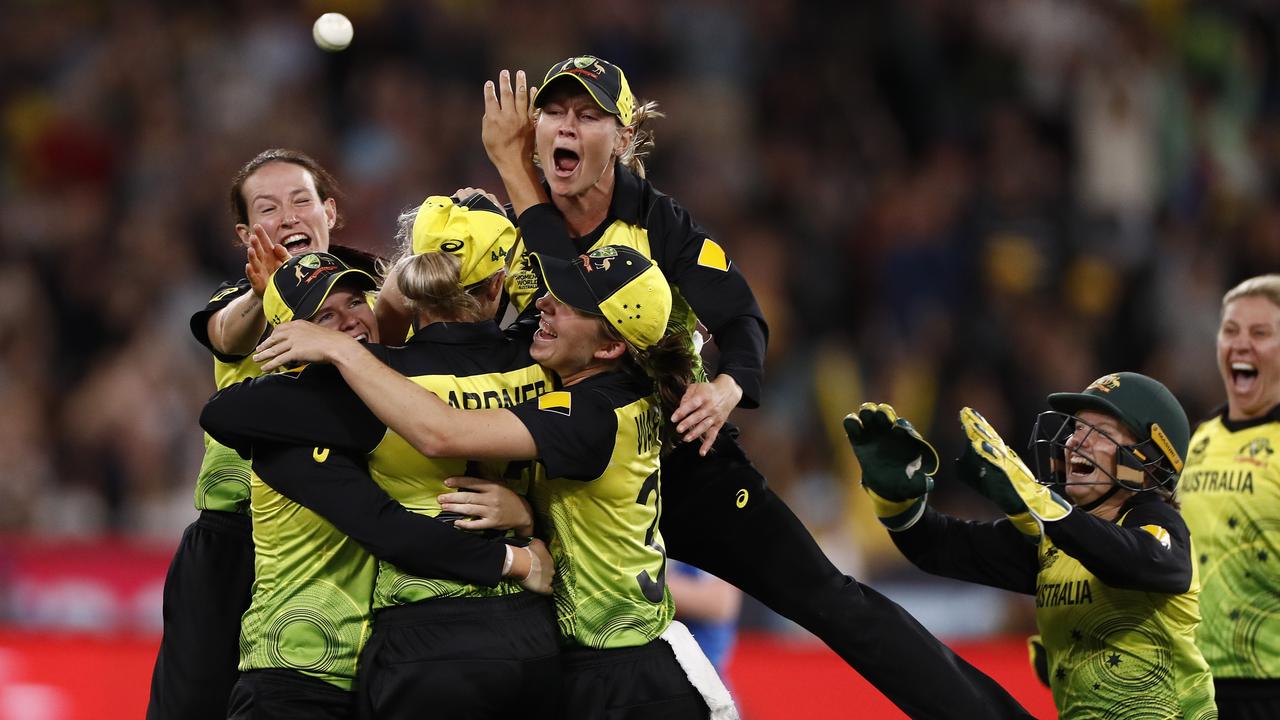 Healy’s 30-ball half-century was the fastest in a T20 final, by a man or a woman. She made the big stage her own by smashing five long sixes.

But Mooney’s calm unbeaten 78 was equally as important as she finished with the highest individual score in a T20 final.

To pull off an unlikely victory, India needed to produce the second-highest successful chase in WT20I history but were bowled out for 99. Their hopes of an unlikely win couldn’t have started much worse with star teen batter Shafali Verma caught by wicketkeeper Healy off Megan Schutt (4-18) in the first over. Alyssa Healy of Australia hits a six at the MCG. Picture: AAP

Player-of-the-match Healy revealed they won the world title with a little superhero inspiration.

“We knew that every single opposition was going to come really hard at us in every game (of the World Cup) and it was about how we could absorb that pressure and throw it back in their faces,” Healy said.

“Me being the nerdy* person in the team I referred to the Black Panther*, whose suit absorbs energy from his opponents and when he’s ready he forces it back upon them.

“We took that mentality* into the tournament.

“Everyone came really hard at us early on and we held our nerve and got the job done. We were all Black Panthers out there.”

The huge crowd, which also enjoyed a concert from pop star Katy Perry, smashed the Australian record for the highest attendance* at a women’s sporting event, but fell short of the world record of 90,185 that watched 1999’s soccer World Cup final.

CLASSROOM ACTIVITY
1. Superhero inspiration
Choose a superhero character that you believe would inspire you to a great sporting victory.

Think about the powers, behaviours and characteristics that superhero possesses and how they would encourage you to push on through difficulties.

HAVE YOUR SAY: Tell us what you think about Australia winning the World Cup.
No one-word answers. Use full sentences to explain your thinking. No comments will show until approved by editors.