Oscar Piastri of Australia and Prema Racing drives during practice ahead of the Formula 3 Championship at Mugello Circuit on September 11, 2020 in Scarperia, Italy. Picture: Getty Images

Australian teenage racing driver Oscar Piastri is the Formula 3 world champion after a thrilling end to the season in Italy.

Piastri, from Melbourne, drives for Prema Racing, and finished on top of the 18-race, 2020 FIA Formula 3 championship season.

In motorsport racing, Formula 3 is a rung* below Formula 2, the feeder series for Formula 1.

During race two at Mugello, near Florence in Italy, the 19-year-old crossed the line in seventh after narrowly crossing ahead of Venezuela’s Sebastian Fernandez. 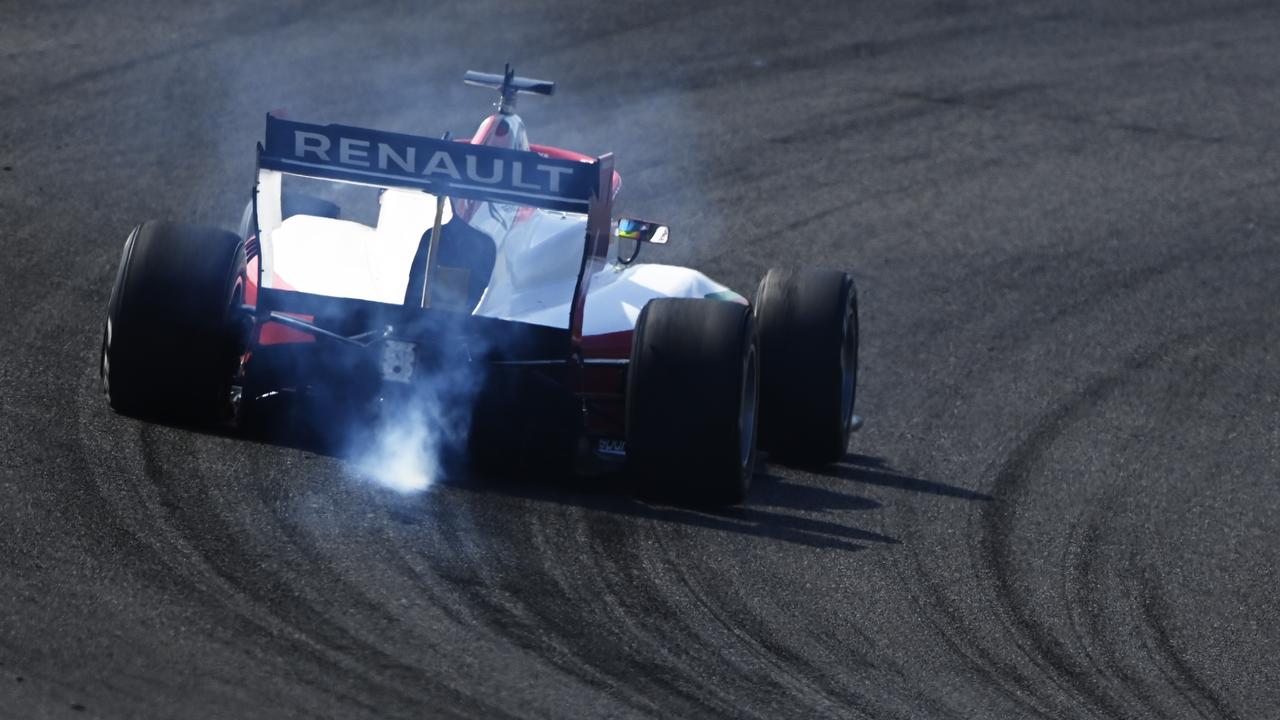 Oscar Piastri drives during qualifying for the Formula 3 Championship at Mugello Circuit on September 11, 2020 in Scarperia, Italy. Picture: Getty Images

Sargeant had a slim* chance of winning the F3 championship heading into the final race, but crashed in the opening lap after making contact with Germany’s Lirim Zendeli.

New Zealand driver Liam Lawson won Sunday’s 21-lap reverse-grid race in Italy, but all the attention was on the Aussie teenager.

Piastri’s title was in doubt when a DRS system saw him finish 11th in race one at Mugello, but clinching* seventh on Sunday was enough to top the standings.

After the race, Piastri conceded*: “I am exhausted, it was tough, the last few weeks have tested me emotionally. I have been consistent throughout the year and keeping my head cool has been the biggest thing for me.’’

Piastri also expressed remorse for his unlucky teammate: “I feel so bad for Logan, so sorry for Logan.”

During the 2020 season, Piastri secured two wins — at races in Speilberg, Austria and Barcelona, Spain — along with six podium* finishes and four fastest laps.

It was a very competitive championship, with nine different race winners throughout the season, none achieving the feat more than twice. Piastri has tasted* success on the track before — in 2019 he won the Formula Renault Eurocup event, winning seven of the 19 races.

Piastri has cemented himself as a future star of motorsport, and will almost certainly make his debut appearance in Formula 2 in the coming years.

“I started racing remote control cars when I was about six, so long before any actual kind of motorsport,” Piastri told The Sydney Morning Herald.

“Both my pop and grandad are mechanics and they have always followed motorsport, and my dad’s business was a car tuning company, so he has always been massively into it. It was just unfortunate when he was much younger he didn’t have the funding to do anything serious in motorsport. Oscar Piastri at age 13, when he was a karting champion.

F1, F2, F3 EXPLAINED
Formula 1, or F1, is car racing on a track between single-seat, open cockpit, open-wheel racing cars made of carbon-fibre in which the engine is behind the driver and the car has big front and rear wings. They are built for Formula 1 racing, rather than for regular driving. Each team custom-builds their own chassis*, for a driver with a better car has an advantage.

In both Formula 2 and Formula 3 racing, all teams use the same car chassis, engine and tyres, so the racing is more about the skill of the driver than also about having a better-performing car.

Under a global program by the FIA (Fédération Internationale de l’Automobile), drivers begin their careers karting in their own countries, before progressing through Formula 4 (which is for juniors) then Formula 3, then Formula 2.

The very best make it to Formula 1. As of the 2020 Italian Grand Prix, there have only been 775 Formula 1 drivers (from 39 countries) who have raced in FIA World Championship races since the first, the 1950 British Grand Prix.

CLASSROOM ACTIVITIES
1. Find the Facts
Read through the article carefully to find out some facts about Formula 1, 2 and 3 car racing.

Draw a 3-column chart with the following titles. FORMULA 1, FORMULA 2 and FORMULA 3.

Under each write information you can find in the article about each. Make sure you include the differences between each level of racing as well as other facts you may find. There should be more facts about Formula 3 racing than the other levels, including where/when some events were held, names of some of the drivers, etc.

When you have found all the facts you can in the article, you may like to include other information that you already know or you can research some further facts about Formula car racing. Write these in a different colour.

When you have finished write 3 questions you still have about Formula car racing.

2. Extension
Imagine you have the job of announcing the winner of the 2020 Formula 3 World Championship. Write a short speech to announce those who came 3rd, then 2nd, and finally the winner of the series. In your speech include details from the season or about the particular driver’s achievements to personalise the announcement. For example:

“Third in the Formula 3 2020 World series is a man who had a very real chance of winning. It wasn’t to be in 2020 but third is a remarkable achievement and we look forward to seeing you back in 2021. Congratulations …”

HAVE YOUR SAY: What sort of world champion would you like to be?
No one-word answers. Use full sentences to explain your thinking. No comments will be published until approved by editors.