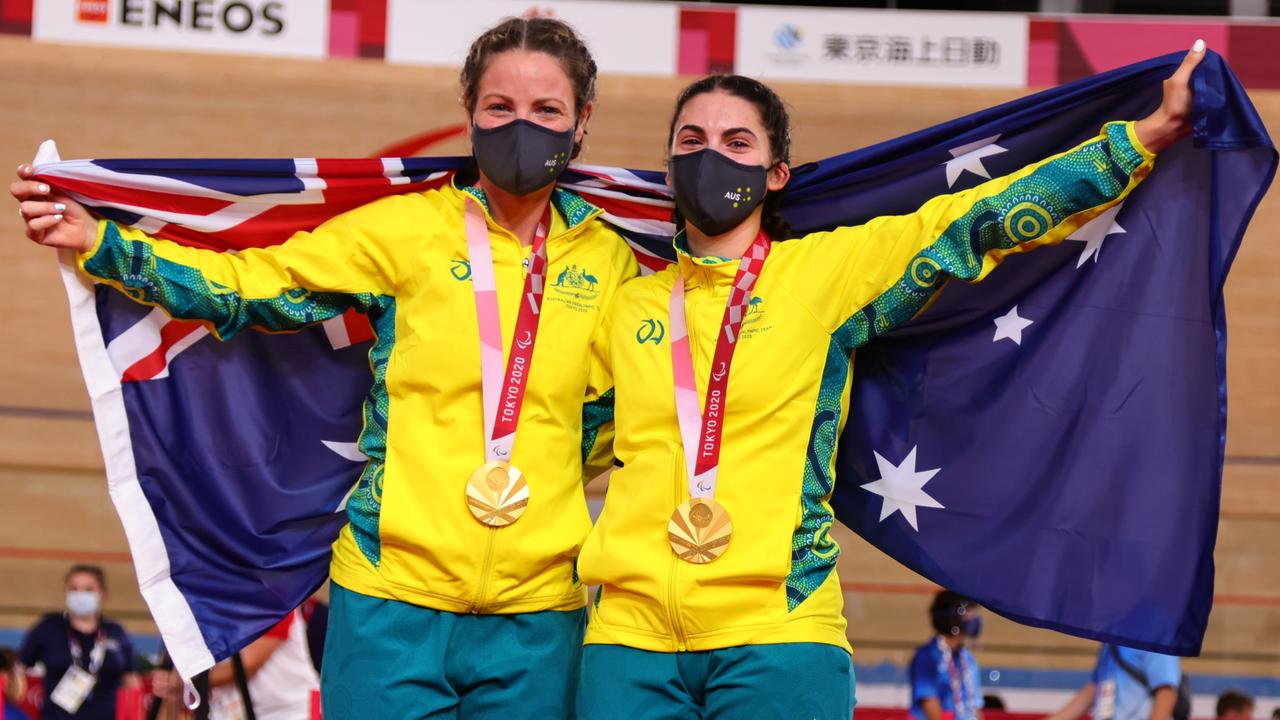 Cyclists Emily Petricola and Paige Greco celebrate together after claiming the first two gold medals of the Tokyo Paralympics and the first two for Australia. Picture: PA

Australia won the first two gold medals up for grabs at the Tokyo Paralympics in an incredible first day of competition that put us at the top of the medal table.

We finished the day with 10 medals, including six golds.

The first two golds came within 15 minutes of each other in track cycling at the Izu Velodrome*.

Paige Greco kicked off Australia’s medal count when she obliterated* her own world record to win the C3 classification for the women’s 3000m individual pursuit.

Then Emily Petricola – who broke her own world record in the C4 class in the morning heats – won gold in her race in even more dominant* fashion, lapping her American opponent, Shawn Morelli, with three laps still to go. 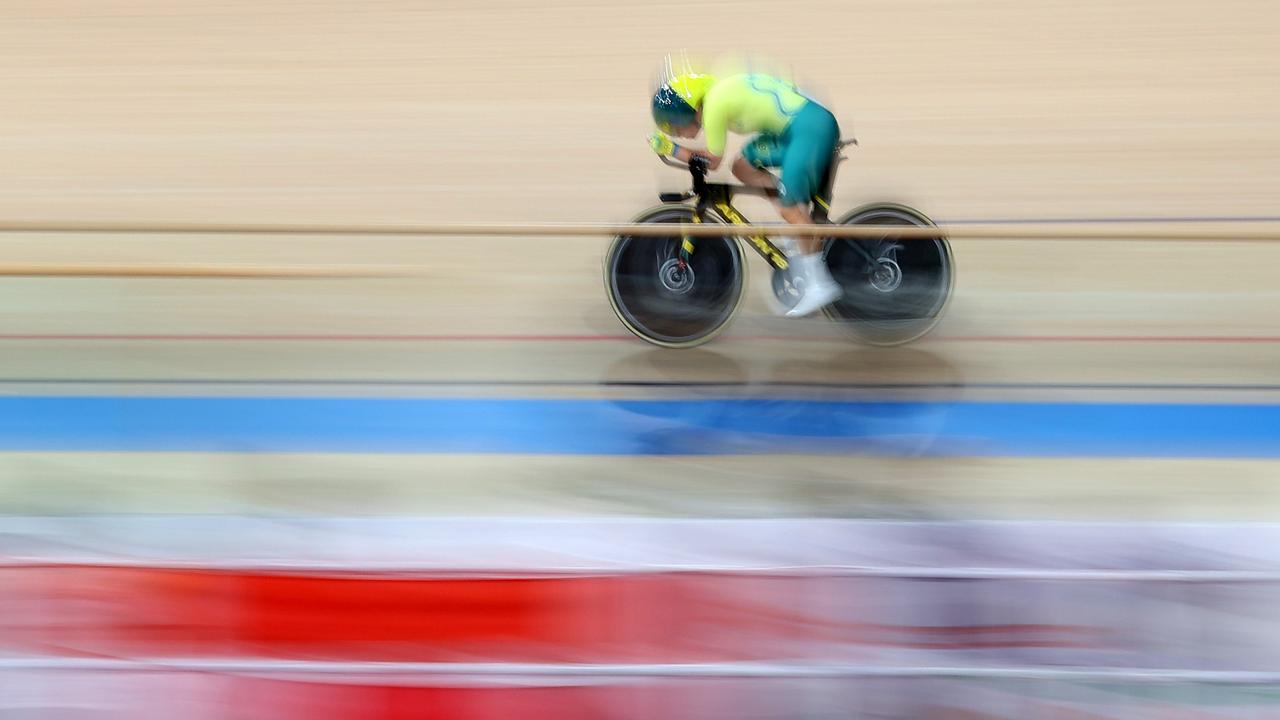 Emily Petricola sets a speedy pace in the final of the women’s C4 3000m individual pursuit at Izu Velodrome on day one of the Tokyo Paralympic Games. Picture: Getty Images

Greco, racing against China’s Xiaomei Wang, won her gold medal race easily in a time of 3mins 50.815sec, eclipsing the world record mark of 3mins 52.283sec she set earlier in the day.

Greco was just too fast and strong for her Chinese rival from the outset, opening up a lead of more than one second after the first 1000m, then finished more than four seconds in front. 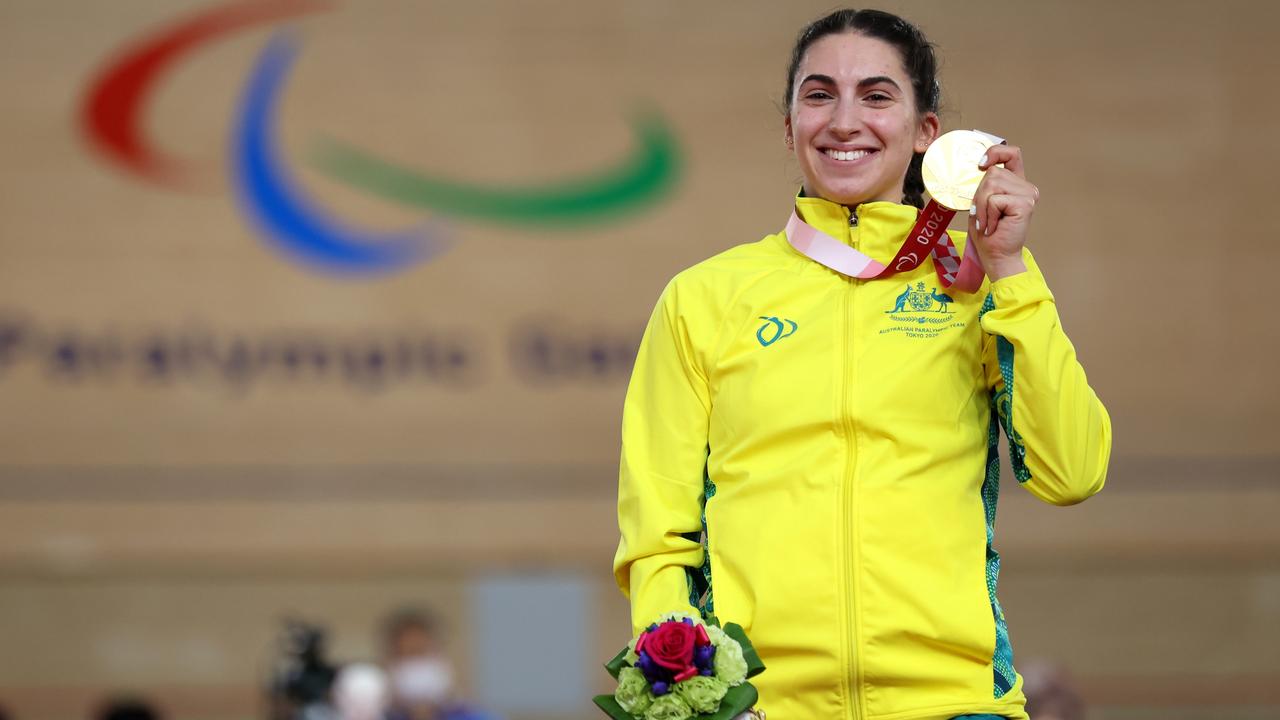 Greco has cerebral palsy, which affects the right side of her body. She has already won four world tiles, both in track and road cycling, but this was her first Paralympic gold.

It was also a first Paralympic gold for Petricola, who was making her Paralympic debut at age 41. Diagnosed with multiple sclerosis when she was 27, she was a latecomer to cycling but has been guided by her friend and mentor*, Shane Kelly, a former world champion.

Morelli set off fast to try and rattle the Australian, leading through the first 500m, but was unable to maintain the pace as Petricola caught up after nine of the scheduled 12 laps. It was also a first Paralympic gold medal for Emily Petricola, who is competing at her first Games. Picture: Getty Images

It was a golden start to day one of competition for Australia, with our swimmers continuing the medal rush in the evening, adding four golds, a silver and three bronze to put Australia on top of the medal table. Will Martin celebrates with his gold medal after winning the men’s S9 400m freestyle final at the Tokyo Paralympic Games. Picture: Getty Images

“It was such a hard race,” Patterson told Channel 7. “I knew it was going to be a tight one.

“I’m feeling more fried than a chook from KFC.” Lakeisha Patterson raises her arm in triumph after winning the women’s S9 400m freestyle final on day one of competition at Tokyo. Picture: Getty Images

Paralympics kick off in blaze of colour

CLASSROOM ACTIVITIES
1. Performance enhancing outfits and equipment
Draw a sketch of the uniforms and equipment used by competitors in track cycling. Label your sketch to point out any features that are designed to help in the sportsperson’s performance. (For example, the uniform may be skin-tight so that it is as aerodynamic as possible.)

Then, draw a design for some new and improved uniforms and equipment for this sport. For the purposes of this activity, imagine that there are no regulations and you are allowed to include any features you like as long as they are not harmful to any competitors.

2. Extension
Write a one-minute sales pitch for your new uniform and equipment design, convincing the team manager to purchase your product for their team.

VCOP ACTIVITY
Paralympic Word Splash
Let’s create a word splash. Sit with a partner, and between you, write the word PARALYMPICS in the middle of a piece of paper.

Decide who goes first. Then take it in turns to write a word around the central word that you associate with the Paralympics.