Unlike other sporting events, the Tour de France has multiple winners throughout the race and at the end. There is an overall winner who is awarded a yellow jersey (Froome), a points winner who wins the green jersey (Matthews), the mountain riding winner who gets the polka-dot jersey and the best young rider who is presented with the white.

Matthews walked onto the podium with the national flag around his shoulders as the first Australian to win the green jersey since Robbie McEwen in 2006. 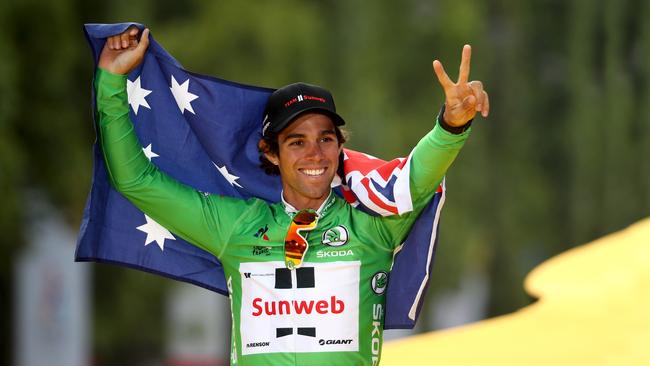 “Hopefully we can really enjoy it and we can even get better from it. What’s it been? Eleven years since an Aussie has won the green jersey? Hopefully we’ve ended that dry spell now.”

So overjoyed was the Canberra-born winner that he had to be told to get off the podium.

“I was trying to soak it up as much as I could,” he said.

“I actually wanted to stay a little bit longer. I didn’t want to get off because the crowd was going quite crazy and I really enjoy that. It went a little bit too fast.”

At one point, the Aussie trailed German Marcel Kittel by 133 points, but clawed his way back.

Matthews’ wife Kat said she knew her husband had it in him.

“He is a fighter. He was never going to give up,” she said.

“I can’t even describe how proud I am of him.”

Matthews said he was motivated by good friend and Australian title contender* Richie Porte, who crashed out of the Tour on stage 9 and faces a long recovery.

“When the accident happened, straight after he was still super motivated for me to achieve my dreams and that shows what a true champion he really is,” Matthews said.

“For him to keep believing in me after his dreams got taken away; it’s pretty special for me.

“I know how hard he was working for this Tour de France and what sort of shape he was in. He would have given ‘Froomey’ a real run for the jersey.” Froome’s fourth French title in five years was a reminder of his enduring* skill.

“Each time I’ve won the Tour it’s been so unique. So different and such a different battle to get to this moment. They’re all so special in their own way,” Froome said.

“Definitely a celebration is overdue. I’m looking forward to it.”

YELLOW
The yellow jersey is awarded to the overall classification leader. It is also called the maillot jaune. The bright top is widely regarded as the most sought after item in professional cycling. It is awarded at the end of each stage throughout the race and then at the end to the rider who finished the race in the least amount of time. The green jersey goes to the points classification leader. Riders are awarded points for the place they finish in each race. Stage winners win the most points. The number of points awarded changes depending on the level of difficulty of the stage.

The white and red polka-dot jersey is awarded to the King of the Mountains classification leader. Points are awarded to the riders who reach the top of each mountain first.

The best young rider is awarded the white jersey. It is reserved for cyclists under 26. endurance: hard for a long time
contender: in it to win it
enduring: long-lasting

After reading the article on the winners of the Tour de France cycling race, answer the following questions in as much detail as possible.
Try and incorporate the question into your answer.

• What is the Tour de France?

• Which part of the Tour de France did Michael Matthews win?

• Why was his win significant for Australians?

• What are the different jerseys winners are awarded in the Tour de France?

• Who won the overall race?

• Come up with a question you would ask Michael Matthews if you were to interview him.

Draw a cartoon of Michael Matthews on the podium at the presentation of the winners of the Tour de France.

In groups of four, write a short skit/role-play re-enacting the presentation of all the winners on the Tour de France and how they were presented on the podium.
What might’ve happened?
What did they say?
What were they awarded?

Perform your role-play to the class.

Extension:
Write and perform an acceptance speech for Michael Matthews.


Commentary of the race

The Tour de France runs over multiple legs in a 21 day period.
Michael Matthews has been fighting his way through each leg.

Write a commentary piece for the leg of the race when Matthews “clawed his way back.”
Commentary usually includes lot of short sharp sentences.

You’ll probably notice you have few connectives in your paragraph.
This is a way of developing suspense and quick moment in your text.
Do you notice anything else about the VCOP in your paragraph?