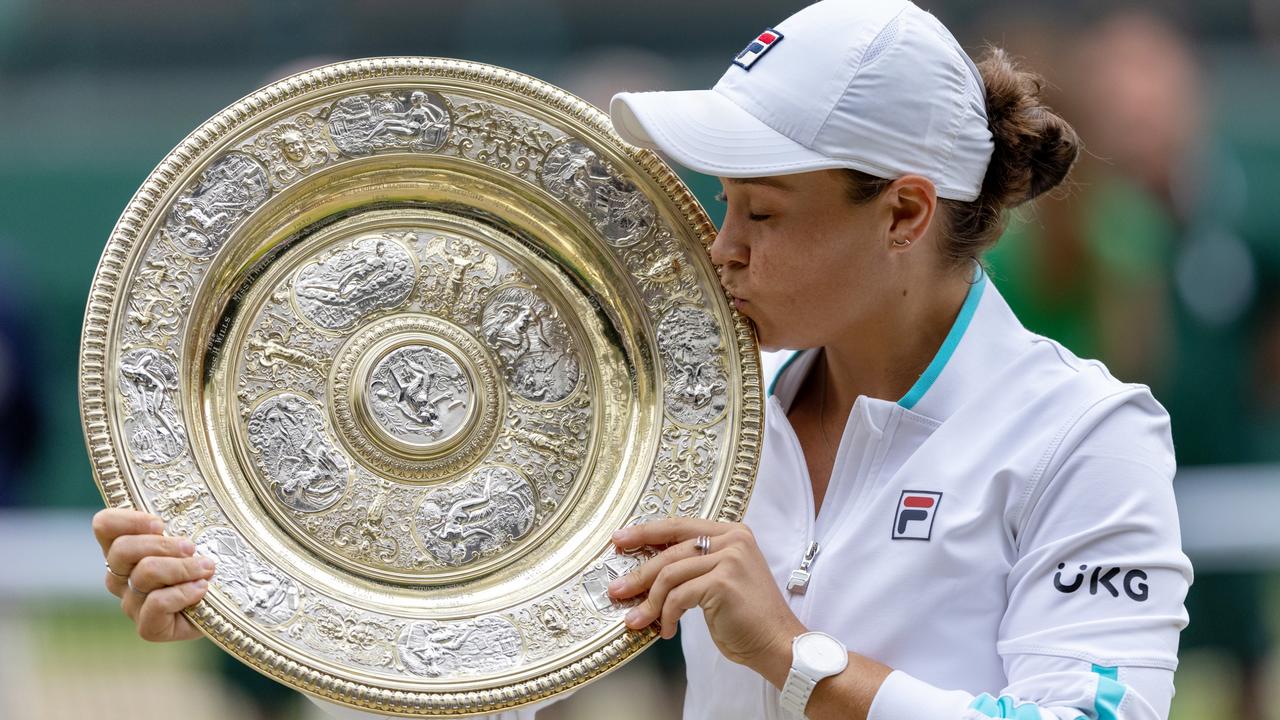 Barty overcame a few wobbles – including being broken when serving for the match in the second set – to beat Karolina Pliskova 6-3, 6-7, 6-3 and spark a feeling she said she had never experienced on a tennis court before.

The 25-year-old’s victory is extra special to her as it came on the 50th anniversary of her “friend and mentor*” Cawley’s first win at the All England Club, where the Wimbledon tournament is played.

“The stars aligned* for me over the past fortnight,” Barty said. “That it happened to fall on the 50th anniversary of Evonne’s first title here is absolutely incredible.”

Barty – who won the junior title at Wimbledon in 2011 – said it was a “miracle” she had been able to play at all after suffering a serious hip injury that forced her to retire from last month’s French Open.

However, it was Cawley who dominated her thoughts. Barty shed a tear when the now 69-year-old was mentioned after her victory and wore a tennis outfit that was specially designed as a tribute to the dress Cawley famously wore in the 1971 final. 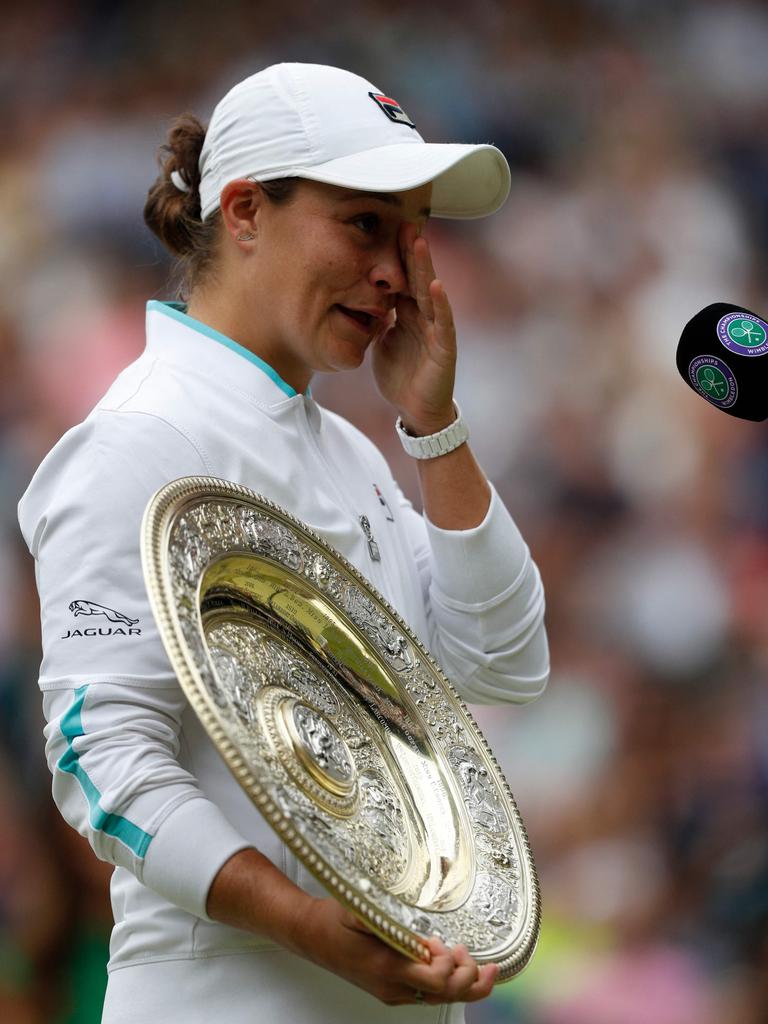 Ash Barty shed a tear when she spoke to the crowd after defeating Karolina Pliskova in the Wimbledon final at the All England Tennis Club. Picture: AFP

“Evonne is a very special person in my life,” Barty said.

“I think she has been iconic* in paving a way for young Indigenous youth to believe in their dreams and to chase their dream.

“She’s done exactly that for me as well. Her legacy* off the court is incredible.

“I think if I could be half the person that Evonne is, I’d be a very, very happy person.” Evonne Goolagong holds the Wimbledon trophy she won in her first victory in the women’s final in 1971. Picture: Central Press Photos

Barty spoke with Cawley prior to Wimbledon and said having her at the other end of the phone line if she ever had doubts was a great consolation*.

“I think being able to have a relationship with her and talk with her through my experience, knowing she’s only ever a phone call away is really, really cool,” Barty said.

It was an emotional day for Barty as she became the first Australian woman to win Wimbledon since Cawley won the title for a second time in 1980 – 41 years ago.

Barty pumped her arms, fell to the court and cried after winning match point.

She climbed the stand to see her support team after the victory and later said: “This is incredible”. 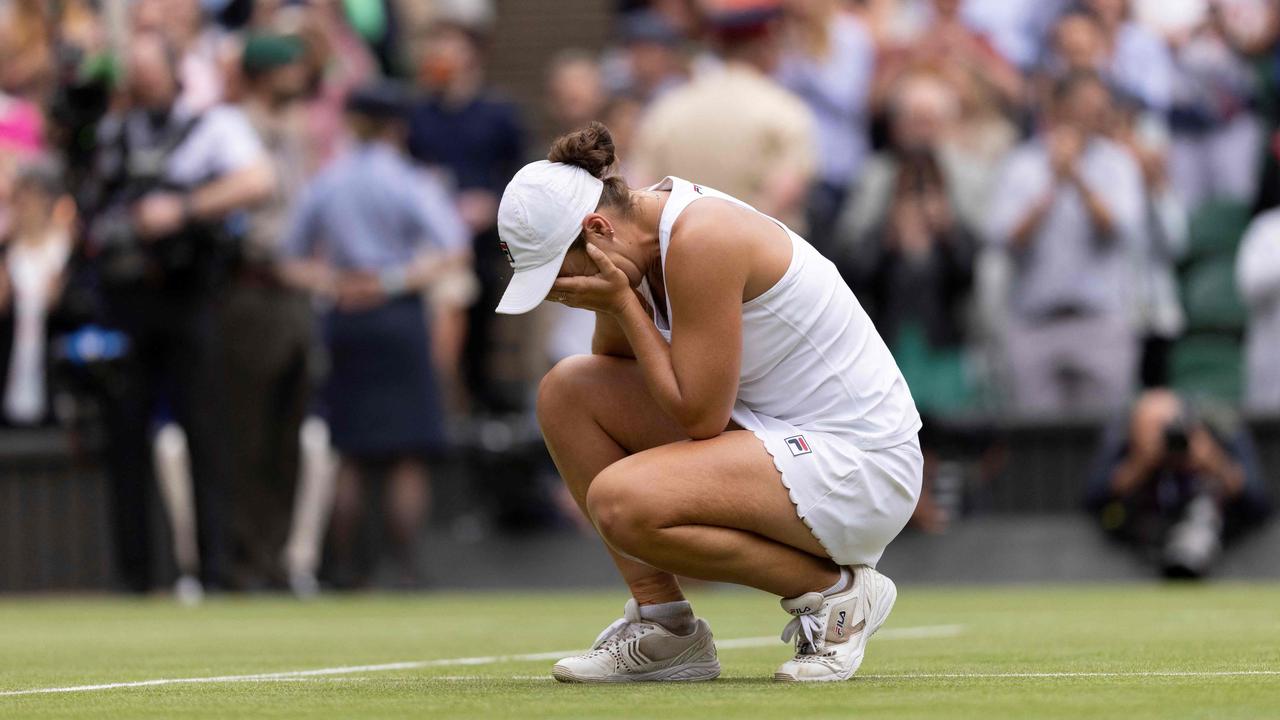 An emotional Ashleigh Barty in the moments after claiming the match at Wimbledon. Picture: AFP

In front of the Duke and Duchess of Cambridge, and celebrities including actor Tom Cruise, Barty opened her serve with two aces and won a remarkable 14 points in a row.

Pliskova, from the Czech Republic, hit back in the second set, finding her huge 185km/h serve. The 29-year-old won the second set in a tie-breaker after Barty dropped her serve and failed to take out the set and the match.

Fired up after allowing the match to slip, Barty responded to win the first three games of the third set and went on to win the match, along with the winner’s prize money of more than $3 million. Barty congratulated Pliskova and thanked the crowd who watched her victory.

“But I have to thank, genuinely thank every single person in this stadium. You have made my dream so special. Thank you so much.

“Karolina is an incredible competitor, she brought out the very best in me today. It was an exceptional match right from the start. I knew I had to bring my very best level and I was really proud of myself.” Dylan Alcott kisses the winner’s trophy after winning the final of the quad wheelchair singles at Wimbledon. Picture: AFP

It was the second Australian victory at Wimbledon the same day, after Dylan Alcott claimed his second quad wheelchair singles championship.

It was his third Grand Slam* win this year, following the Australian and French Opens.

If Alcott wins gold at the Paralympics in Tokyo and follows up with victory in the US Open in September he will complete a rare “golden slam*”.

The world No. 1 now has 14 major singles championships.

2. Extension
Imagine you are Ash Barty. Write the victory speech you would give after winning the Wimbledon final. Remember to acknowledge your opponent and all the people who have influenced and supported you, as well as the hard work you have done to win the final.