ALEX Honnold had dreamt of climbing the mighty El Capitan in California’s Yosemite National Park without any safety gear for eight years. But every time he looked up the massive granite rock wall, he found it too intimidating.

That was the case until last weekend, when the elite rock climber reached the summit in about four hours using only his hands and feet.

On Saturday June 3, the 31-year-old became the first to climb the 914m rock wall alone without a safety harness* or ropes to catch him if he fell.

“I was pretty much elated*,” Honnold said of reaching the top.

“I was probably the happiest I’ve ever been. It’s something that I thought about for so long and dreamt about and worked so hard for. I mean, it’s pretty satisfying.” Honnold, who grew up in Northern California, started indoor rock climbing at age 11 and has been preparing for this historic climb for two years.

He scaled the route countless times, rehearsing* it with protective gear and memorising each hole he had to grab and the way he had to position his body until he felt comfortable enough to attempt the “free solo” climb.

The most difficult part of the route is about 700m off the ground, where there are very small holds where only a thumb can fit. But even more challenging was overcoming the mental hurdle, he said.

“Each year I would show up and it would seem just much too daunting*,” said Honnold.

“To walk up to the base of the climb without rope and harness, it just feels a little outrageous*. Getting over that side of it was the hardest part.”

Observers said his climb has pushed the limits in a sport that requires a high level of athleticism, risk-taking and mental focus.

Author of “El Capitan: Historic Feats and Radical Routes” Danile Duane said Honnold was alone at the top of his game.

“This has never been done before … and it’s hard to imagine anybody ever coming close to what he’s done,” Duane said.

“To climb without ropes where the slightest slip is literally fatal in that arena requires enormous self-control and focus.

“It requires this intense cognitive* effort to keep fear at bay and focus on the task in front of you.” Neuroscientists recently studied Honnold’s brain in an attempt to understand his ability. And they discovered he doesn’t seme to have any fear.

They put him in a large machine and then quickly showed him a series of scary and off-putting images that would frighten and stress most people.

But it didn’t register with Honnold. His amygdala, the part of the brain that reacts to fear, lay dormant*.

“Maybe his amygdala is not firing — he’s having no internal reactions to these stimuli*,” said neuroscientist Dr Jane Joseph.

“But it could be the case that he has such a well-honed regulatory system that he can say, ‘OK, I’m feeling all this stuff, my amygdala is going off,’ but his frontal cortex is just so powerful that it can calm him down.” 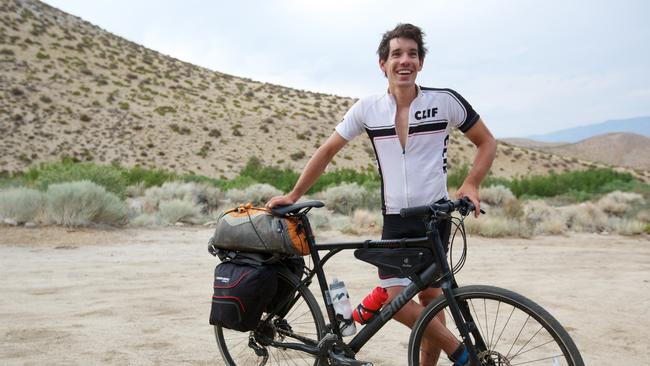 Medically, it would seem, Honnold does not experience fear like the rest of the world. Or, if he does experience it, he requires a lot more to set it off than anyone the team of neuroscientists has ever studied.

The historic climb of the Yosemite rock face will be featured in a National Geographic documentary.

WARNING : Children should NOT attempt rock-climbing on their own or without safety equipment.

safety harness: clipped on to the person and a wall to enure they cannot fall

dormant: not in use

stimuli: things that get reactions

Work with a partner to brainstorm a list of all of the thoughts that go through your mind and things that happen to your body when you do something that is scary.

Now work on your own to write a descriptive paragraph as though you were the one climbing El Capitan without any safety equipment.

Use the ideas you brainstormed with your partner to make your writing as vivid and realistic as possible.

Practise reading your piece of writing aloud with as much expression as you can.

When you have perfected your reading, perform your piece for a friend or your teacher.

Activity 2. Positives and negatives of being fearless

From the article we learn that neuroscientists believe that Honnold’s brain works differently to others, causing him to be far less reactive to fear.

Have a think about both the positive and negative implications of this.

Record your thoughts in each column, stating what you think would be good and bad about being ‘earless.

Write down five things that you would do if you didn’t feel fear.

Draw a picture of yourself doing one of them.

Write as many different words for said that you can think of.

Look at the article and circle all the times the word said is used.
Can you up-level it by replacing the word said with one of the words from your list?

THE PAIN AND THE GLORY OF RIO

APRIL IS ALL ABOUT ACTIVITY