Collingwood and Richmond fought out a bizarre* low-scoring draw to restart the 2020 AFL season after a two-month break.

And at time when the AFL wants coaches to let loose with attacking, gung-ho* football, it was the lowest scoring match this century, albeit* played on reduced game time.

The match, broadcast from an empty MCG with fake crowd noise, was also not without controversy* when a score review overturned the goal umpire’s call to award a mark to Richmond’s Jack Higgins on the goal line.

The ball appeared to be over the line for a behind, but Higgins took his chance and kicked a goal to put the Tigers within two points of the Magpies. The Thursday night match in Melbourne kicked off* the most long-awaited round 2 in the history of the game.

Continuing COVID-19-related restrictions in Victoria meant fans could not attend the match and had to be content with cheering and yelling at their TV.

However, there is hope Victorian footy fans could be at the game in person soon, perhaps by round 4, as state governments continue to open up stadiums for AFL matches.

Victoria is likely to trail behind South Australia, NSW and Queensland in allowing a limited number of fans into stadiums, according to the Herald Sun’s Jon Ralph. 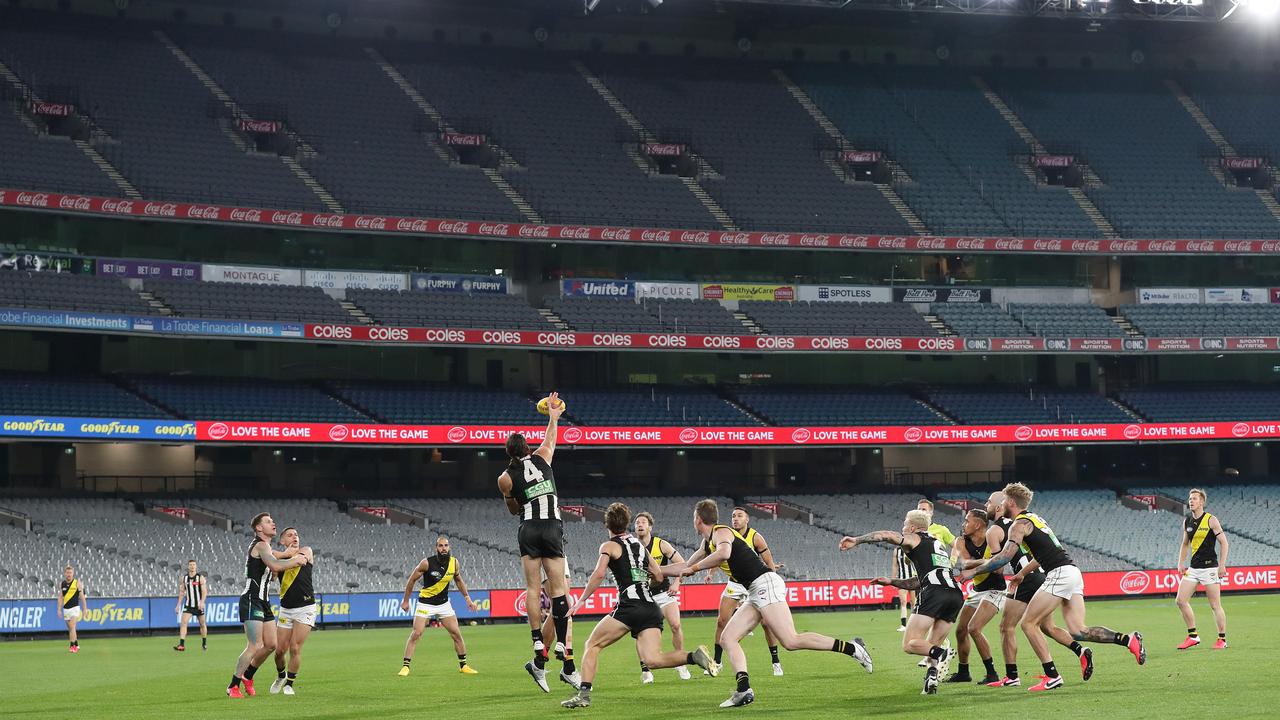 Adelaide and Port Adelaide will welcome more than 2000 spectators into the Adelaide Oval in South Australia for Saturday night’s Showdown, with an extra 240 fans watching from corporate boxes*.

Queenslanders will have to wait a week before being permitted into the Gabba and Metricon Stadium.

On Wednesday morning, NSW Premier Gladys Berejiklian told the Nine Network there would be no further change to the restrictions in that state for round 2 AFL matches or for round 5 NRL matches this weekend, at which a small number of people are allowed to watch from corporate boxes.

“No, not this weekend, no,” she said on the Today show.

“However, we’ve said the use of corporate boxes and the like is the first stage of that engagement.” While it’s not yet clear just how many fans will be allowed into the MCG when it reopens, the MCC* is confident it could welcome tens of thousands of fans under the current social distancing restrictions. The capacity of the MCG is 100,024, making it Australia’s largest-capacity sports stadium and the 10th largest in the world. A section of a capacity MCG crowd. Picture: Cameron Tandy

AFL ROUND 2 MATCHES TO COME

CLASSROOM ACTIVITIES
1. Design a Banner
What do you think should be on the banner for your favourite AFL team to run through before their first game after lockdown? Choose one team, draw a design and choose some words that will inspire them to play their best at this time.

HAVE YOUR SAY: What sport or game are you most looking forward to watching?
No one-word answers. Use full sentences to explain your thinking. No comments will be published until approved by editors.