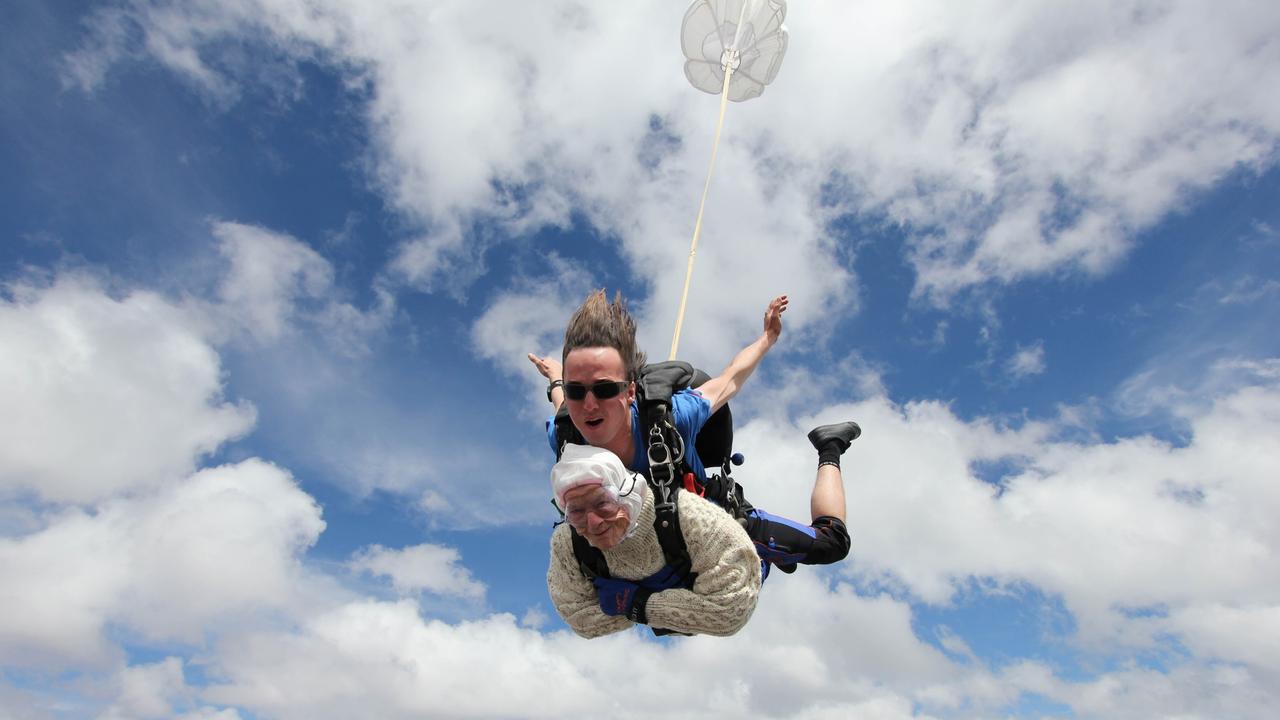 Adelaide’s Irene O’Shea has set a new record as the oldest person ever to jump off a plane. Picture: Bryce Sellick and Matt Teager

Daredevil* grandma Irene O’Shea has proven once again that age is no barrier to adventure, becoming the world’s oldest skydiver after taking the plunge from more than 436m up in the sky.

In front of close to 50 family and friends, the 102-year old from Athelstone, a suburb of Adelaide, South Australia, completed her landing on the weekend, taking the title from Kenneth Meyer of New Jersey, US.

After landing with SA Skydiving in Langhorne Creek, SA on Sunday afternoon, Ms O’Shea said she had no fear heading into her third jump in three years.

“I felt normal, about the same (as previous jumps),” she said.

“I was with the same partner (Jed Smith) and the same young fellas were in the plane with me. ‘At 102, Adelaide’s Irene O’Shea is the oldest person ever to jump off a plane. Picture: Bryce Sellick and Matt Teager

“It was very clear up there and the weather was good but it was very cold up there.”

Bad weather forced a delay to the record-breaking jump, which was initially due to take place last Sunday.

In 2016, Ms O’Shea celebrated her 100th birthday by skydiving for the first time, and returned a year later, when she became the world’s oldest female skydiver. “I lost my daughter to that terrible disease 10 years ago and I miss her,” Ms O’Shea said.

Ms O’Shea lives in the same house that she’s lived in since arriving in Australia from England in 1974. She drives her own car, reads without glasses and apart from some minor* issues is in good health. She is already thinking about when her next jump might be.

“Possibly I will jump next year and if I live long enough I’ll jump at 105,” she said.

Together with most of Ms O’Shea’s five grandchildren and 11 great-grandchildren, Shelagh’s husband Mike Fitzhenry watched on yesterday, proud of his mother-in-law’s latest achievement.

“I felt inspired by her — the attitude and courage and fearlessness* is amazing,” he said.

“If I walk up three stairs and then walk back down I get nervous. I would never jump out of a plane.” Mr Fitzhenry said his late wife was very much like her mother — independent and full of life.

“She was a chip off the old block,” he said.

“She was good with languages and the first thing to go when she got motor neurone disease was her speech — it’s terrible for someone who spoke so many languages.”

CLASSROOM ACTIVITIES
1. Three questions for Ms O’Shea
If you could find out more about Ms O’Shea and her experiences, what 3 questions would you ask her? Make one question about her skydiving, one about Motor Neurone Disease and one about her life. Think carefully about your questions. Make sure they are interesting, respectful and open-ended.

2. Extension
Think of an older person you know — perhaps a grandparent or a family friend. What would you like to know about their life and experiences? Make a list of interesting, respectful, open-ended questions you might ask the next time you see them.

HAVE YOUR SAY: What do you find inspiring about your grandparent or an older friend or person you know?
No one-word answers. Use full sentences to explain your thinking.