Artist's impression of K2-18b super-Earth, the only super-Earth exoplanet known to host both water and temperatures that could support life. Picture: AFP/ESA/Hubble/M.Kornmesser

Scientists have discovered water on a distant super-Earth known as K2-18b, which has temperatures suitable for life.

It is the first time water vapour has been detected in the atmosphere of a super-Earth, which means a planet bigger than Earth but not as big as a gas giant.

K2-18b is 110 light years away in the constellation Leo. A light-year is a distance equal to how far light can travel in one year. One light-year is about 9.5 trillion kilometres, which is a very long way.

The exoplanet* is in its star’s Goldilocks zone — not too hot and not too cold but just the right distance from the star to possibly have life. 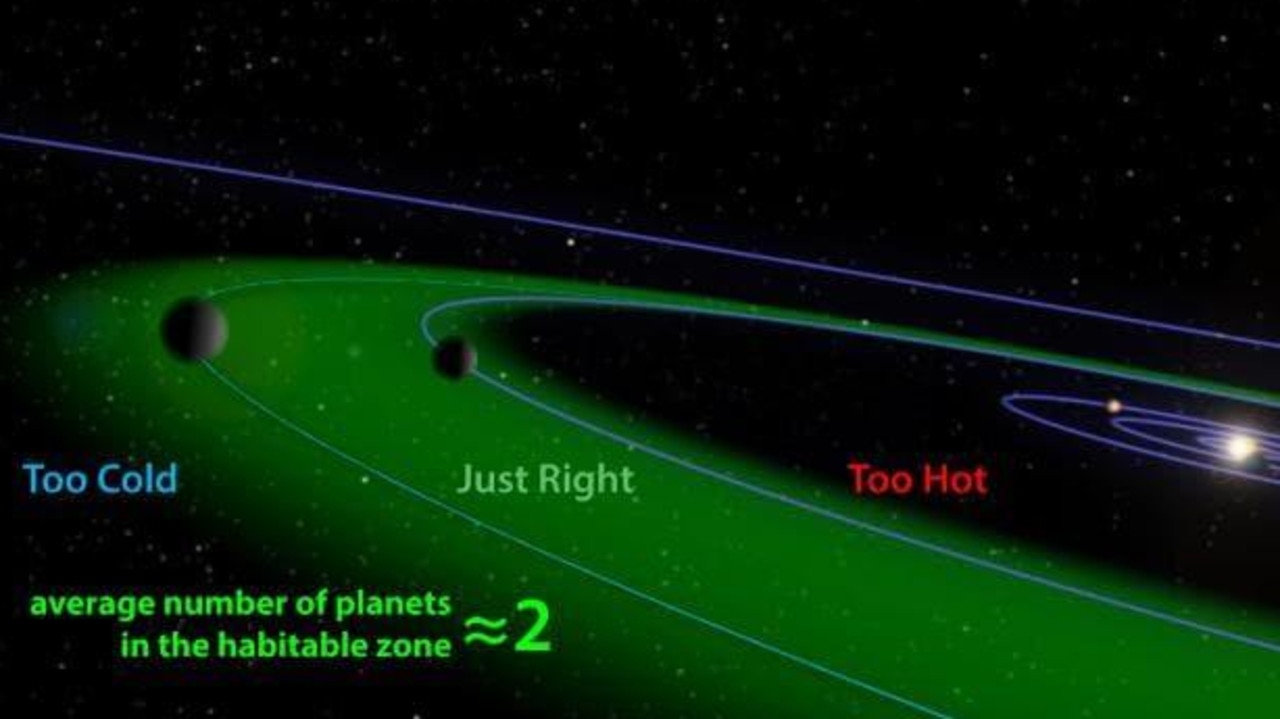 It’s the only exoplanet known to have both water and temperatures needed for life, the team from University College London, UK reported in the journal Nature Astronomy this week.

“K2-18b is now the best candidate for habitability* that we know. It’s the only planet outside our solar system that we know has the correct temperatures, atmosphere and water,” the University of London (UCL) research associate said.

“At the same time, K2-18b is not a second Earth. This is a planet that is much bigger. It has a different atmospheric composition* and it’s orbiting a completely different star.

“The search for habitable planets is very exciting, but it’s here to always remind us that this is our only home. And it’s probably out of the question whether we’ll ever be able to travel to other planets,” he said.

Nonetheless, Tsiaras said K2-18b could help us know: “Is the Earth unique?”

In a paper just submitted to the Astronomical Journal for publication, these scientists suggest it might even be raining there.

“This represents the biggest step yet taken toward our ultimate goal of finding life on other planets, of proving that we are not alone,” the study’s lead astronomer, Bjorn Benneke of the University of Montreal, Canada, said in a statement.

MEET K2-18b
This exoplanet is twice as big as Earth, with eight times the mass*.

It is a super-Earth, which is a name for a planet that has a mass greater than Earth but less than gas giants such as Uranus and Neptune. There are 1260 known super-Earths.

K2-18b takes 33 days to orbit its star, so one year there is one month here. At this distance from its star, temperatures range from minus 73C to 47C.

Water has been identified in the atmospheres of hot gas giants circling other stars but this is the first time water vapour has been detected in a type of exoplanet other than a gas giant.

K2-18b is thought to be rocky and no one knows whether water is flowing on the surface.

It was discovered in 2015 by NASA’s Kepler Space Telescope.

Its star is a red dwarf and is a lot smaller than our Sun, which is a yellow dwarf. 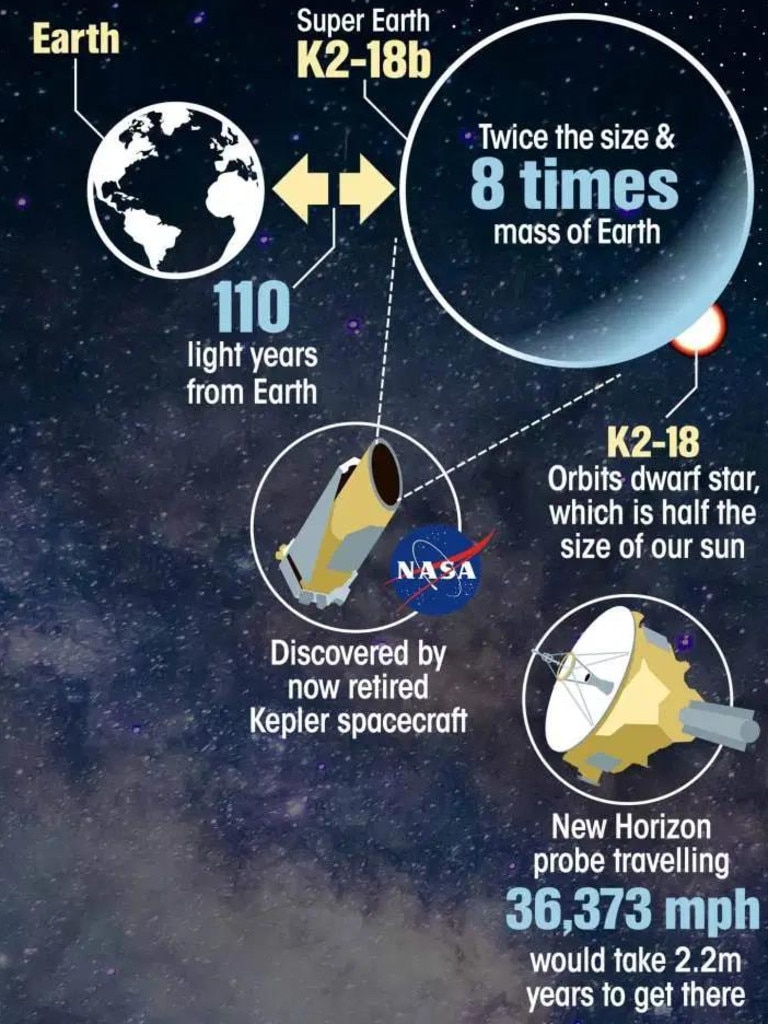 The star, glowing red in the day sky, is believed to bombard the planet with radiation* harsh enough to quickly cause cancer in human visitors, although “life there may have evolved differently” in order to survive, noted the London team’s Ingo Waldmann.

Given K2-18b’s mass, it would have more gravity than Earth and it would be difficult to walk on the surface.

“Maybe not quite your vacation destination just yet,” Waldmann joked.

Both research teams studied information captured by the Hubble Space Telescope and other spacecraft. MORE TO KNOW
Scientists will learn more about K2-18b by using information collected in the future from NASA’s James Webb Space Telescope and the European Space Agency’s Ariel, which are both due to launch in the 2020s.

Red dwarf stars are believed to be the most common planets and stars in our Milky Way galaxy. Illustration of some of the watery exoplanets outside of the Solar System in comparison to Earth, located at the very end. Picture: The Sun

CLASSROOM ACTIVITIES
1. Similarities and Differences
Draw a Venn Diagram (two large overlapping circles) to note down the similarities and differences between K2-18b and Earth.

Why are scientists not looking at this planet as a second home for humans? Write some reasons why it is not likely to be a viable option for humans to move there?

2. Extension
Use the information that is known about K2-18b and your imagination to draw an artist’s impression of what you think a day on this planet might look like. Include a caption, that tells your audience what the conditions are like when you’ve created your picture (Is it morning or later in the day? Is it in a cold climate, or a warmer one? Would there be seasons like Earth?)

HAVE YOUR SAY: Is it important to you that we looks for planets where there could be life? If so, why? If not, why not? What is more important to you?
No one-word answers. Use full sentences to explain your thinking. No comments will be published until approved by editors.