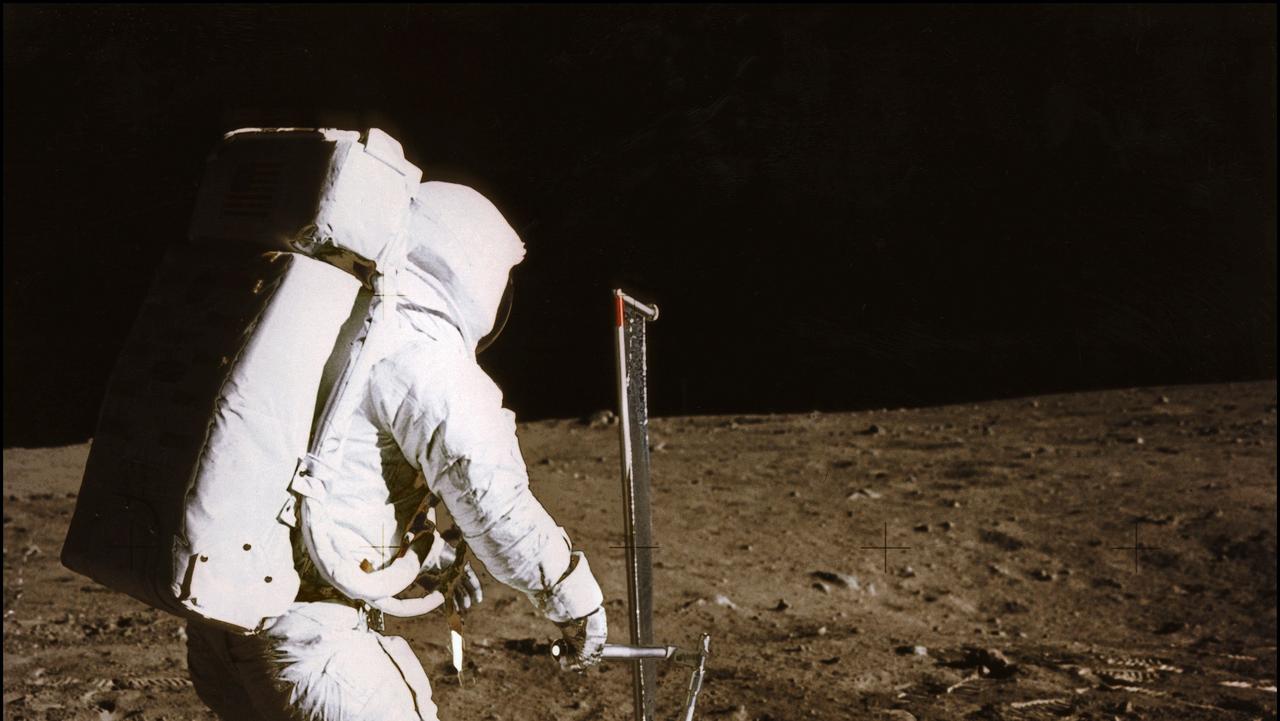 In this 1969 photo taken by astronaut Neil A. Armstrong, you can see Buzz Aldrin conducting experiments on the moon's surface, during the Apollo 11 space mission. Picture: AFP/NASA

US President Donald Trump has directed NASA* to send Americans back to the Moon for the first time since 1972, in order to prepare for future trips to Mars.

“This time we will not only plant our flag and leave our footprint,” Mr Trump said at a White House ceremony as he signed the new space policy directive.

“We will establish a foundation for an eventual mission to Mars and perhaps someday to many worlds beyond.”

The directive calls on NASA to ramp up its efforts to send people to deep space.

However, it didn’t address the difficult issues in space exploration: budgets and timelines.

Space policy experts agree that any attempt to send people to Mars, which lies an average of 140 million miles (225 million kilometres) from Earth, would require immense technical prowess* and a massive wallet.

The last time US astronauts visited the Moon was during the Apollo missions of the 1960s and 1970s.

On July 20, 1969, US astronaut Neil Armstrong became the first man to walk on the Moon. Mr Trump, who signed the directive in the presence of Harrison Schmitt, one of the last Americans to walk on the Moon 45 years ago, said “we pledge that he will not be the last.”

The better known Buzz Aldrin, the second man on the Moon after Armstrong and a fervent advocate of future space missions, was also present at the ceremony but not mentioned by Mr Trump during his speech.

The announcement was welcomed by NASA’s Acting Administrator Robert Lightfoot, who said the agency “looks forward to supporting the president’s directive” and “strategically aligning our work to return humans to the Moon, travel to Mars and opening the deeper solar system beyond.” US President Donald Trump who has directed NASA to return American astronauts to the Moon. Picture: AFP

Mr Trump said the goal of the new Moon missions would include “long-term exploration and use” of its surface.

A White House statement acknowledged that partnerships with other nations and private industry could be considered.

The US “will work with other nations and private industry to return astronauts to the Moon, developing the technology and means for manned exploration of Mars and other destinations in our solar system,” it said.

prowess: kill or expertise in a particular field

CLASSROOM ACTIVITIES
Activity 1. Why do you think the US wants to send astronauts to the Moon and on to Mars?

List as many reasons as you can think of why the US wants to send men to the moon and Mars.

Extension: What will be the challenges for the first astronauts on Mars? Think about and find out more about the problems that a Mission to Mars will face. Imagine that you work for NASA. Use the information to write a report for NASA explaining what the challenges and problems will be. Include some ideas and solutions, too. Use pictures or drawings if you like.

Activity 2. What do you think it would be like to walk on the moon?

Write a story based on this. You can research what astronauts have said about their experiences, or about what it is like on the moon, or find pictures to help give you ideas.

Extension: Did you know that 2017 marked 50 years since the first living creature orbited the earth in a spacecraft? Find out more about this. Use the information you have found to create a poster or other type of tribute, that tells their story and helps people to understand their contribution to space exploration.