The United Arab Emirates launched its first mission to Mars on Monday as it strives* to develop its science and technology activities and reduce the country’s reliance on selling oil.

The Hope Probe — Al-Amal in Arabic — blasted off from Japan’s Tanegashima Space Center at 7.48am AEST* (6.58am Japanese time) Monday for a seven-month journey to the red planet, where it will orbit and send back information about the atmosphere.

The probe used its solar panels to power its systems, established radio communication with the mission on Earth and successfully separated from the launch rocket about an hour after takeoff.

The first Arab mission to Mars was initially due to launch on July 14, but bad weather delayed it twice. An Emirati walks past a screen displaying the Hope Probe at the Mohammed Bin Rashid Space Centre in Dubai, UAE on July 19. Hope – Al-Amal in Arabic – is expected to start orbiting Mars by February 2021, marking the 50th anniversary of the unification of the UAE. Picture: AFP

There are currently eight active missions exploring Mars; some orbit the planet and some have landed on its surface. China and the US each plan to send spacecraft this month.

The Emirates Mars Mission has cost $286 million, according to UAE Minister for Advanced Sciences Sarah Amiri. It aims to provide a complete picture of the Martian atmosphere for the first time, studying daily and seasonal changes.

The UAE first announced plans for the mission in 2014 and launched a National Space Programme in 2017 to develop local expertise*.

It has an ambitious plan for a Mars settlement by 2117.

To develop and build the Hope Probe, the Mohammed Bin Rashid Space Centre (MBRSC) worked with US educational institutions.

The MBRSC space centre in Dubai will oversee the spacecraft during its 494 million km journey at an average speed of 121,000 km/h.

CLOSER TO HOME
Meanwhile, the NASA astronauts who travelled to the International Space Station in SpaceX’s first crewed flight in May are preparing to return to Earth.

They are expected to splashdown on August 2 — weather permitting — after spending two months in orbit, a NASA spokesman said.

US astronauts Bob Behnken and Doug Hurley will gear up for the final test of SpaceX’s so-called Demo-2 mission: a co-ordinated splashdown somewhere in the Atlantic Ocean that will end NASA’s first crewed mission from US soil in nearly a decade.

Since 2011, when the US space shuttle program ended, NASA astronauts have had to hitch rides into orbit aboard Russia’s Soyuz spacecraft.

Boeing Co, which is producing its own launch system in competition with SpaceX, is expected to fly its CST-100 Starliner vehicle with astronauts aboard for the first time next year. OUT AND ABOUT
NASA astronauts have been out in space in recent days working on the major upgrade of the ISS batteries.

It was Bob Behnken’s and Chris Cassidy’s ninth space walk each and they completed the battery swaps in a single space walk rather than two. Their fourth space walk this week will now focus on other chores. NASA astronauts Bob Behnken (left) and Chris Cassidy answer a question during an interview aboard the International Space Station on June 29. Picture: NASA via AP

The lithium-ion batteries — big, boxy units with a mass of more than 180kg — are so powerful only half as many are needed. The batteries store power gathered by the station’s solar panels for use on the night-time side of Earth.

NASA expects these new batteries to last the rest of the space station’s operational* life — another four years from now at least.

Much of this most recent space walk was in the bright glare of daylight. “Can’t control the sun,” Cassidy noted. “Small price to pay for it not going away, I guess. It’s nice to be in daylight the whole time.”

Cassidy, the space station’s commander, is halfway through a six-month mission. A Russian Soyuz capsule is his ride to and from the ISS. 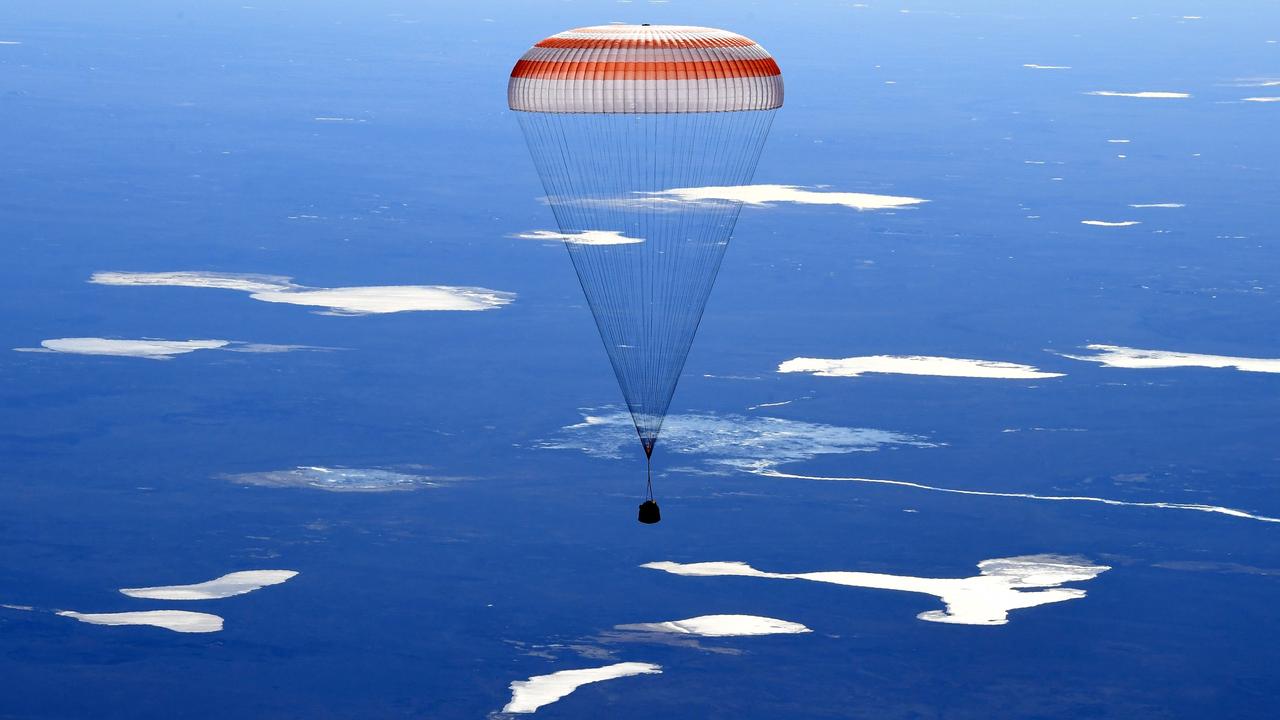 Russia’s Soyuz MS-02 space capsule carrying the ISS crew of Russian cosmonauts Sergey Ryzhikov and Andrey Borisenko and US astronaut Shane Kimbrough lands in a remote area outside the town of Dzhezkazgan (also known as Zhezkazgan), Kazakhstan, on April 10, 2017. Chris Cassidy will also return to Earth in a Soyuz capsule. Picture: AFP

Race is on to reach the Red Planet

Astronauts into orbit on history-making flight

CLASSROOM ACTIVITIES
1. Mars Settlement
The United Arab Emirates have an ambitious plan for a Mars settlement in 2117. For Mars to support a human settlement, there would need to be some basic facilities to help them survive.

Make a list of the facilities that will need to be available on Mars before humans can settle there.

For example, there will need to be a supply of food (is there a farm to grow crops?)

2. Extension
Would you sign up to resettle on Mars?

Many people move house. Many people move house to next suburb, to another state and even internationally. But would you pack up your family and household to move planets? Although the United Arab Emirates plan for settlement on Mars will most likely not be in our lifetimes, if it was an option would you consider it? Would you encourage your children and grandchildren to sign up?

Think about what you think would be the benefits of life on Mars might be. What could the risks be?

Write a paragraph explaining whether you would sign up to move or not. Give reasons for your opinion.

HAVE YOUR SAY: Would you go to the ISS or Mars?
No one-word answers. Use full sentences to explain your thinking. No comments will be published until approved by editors.