Tardigrades are microscopic animals sometimes called “moss pigs” or “water bears” because of how they look.

A herd of thousands of animals called tardigrades — sometimes called “moss pigs” or “water bears” — were left on the Moon earlier this year.

The cuddly looking creatures from Earth with plump bodies and scrunched-up heads are known as the toughest animals in the universe.

They were taken to the Moon in April in Israel’s Beresheet lander, which crashed while attempting to become the first private craft to land on the Moon.

Beresheet was completely destroyed on impact. Beresheet was launched in February on a SpaceX rocket and reached the moon in April. Picture: SpaceX

On board was a time capsule: a book-sized package of back-up items taken to the Moon for safekeeping in case of a disaster on Earth.

The lunar library contained huge amounts of information about humans, including millions of digital pages from books and nearly all of Wikipedia.

The package also contained a large number of tardigrades. 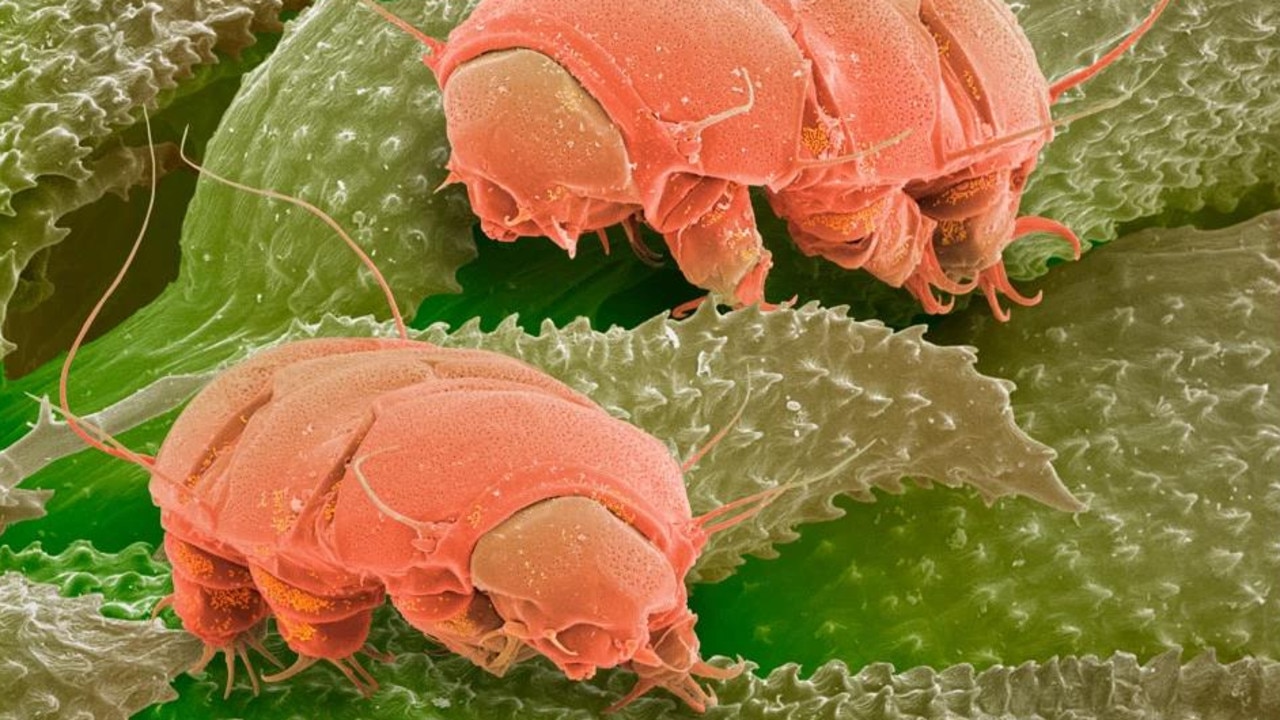 The time capsule was the idea of Nova Spivack, who founded the Arch Mission Foundation, which is dedicated to creating a “back-up of humanity” in space.

The way the package was designed means it probably survived the crash but might have shattered and spread across the lunar surface.

“Our payload* may be the only surviving thing from that mission,” Mr Spivack told technology magazine Wired. MEET THE TARDIGRADES
There are hundreds of species of tardigrades living in almost every habitat on Earth.

It is pretty much impossible to kill a tardigrade. They can survive being frozen, boiled, crushed, zapped with radiation, starved and dried out.

Tardigrades have been described by UK’s Oxford University scientists as “the world’s most indestructible species”. They believe the eight-legged microscopic animal will survive on Earth until the Sun dies. The eight-legged microscopic creatures look a bit like a bear or even a pig and are virtually indestructible. Picture: Getty Images

“Tardigrades are the toughest, most resilient form of life on earth, able to survive for up to 30 years without food or water,” an Oxford study explained.

“And (they can) endure temperature extremes of up to 150 degrees Celsius, the deep sea and even the frozen vacuum of space.

“The water-dwelling micro animal can live for up to 60 years, and grow to a maximum size of 0.5mm, best seen under a microscope.”

The good news is that the tardigrades were dehydrated by Mr Spivack’s team, which means they can’t roam the lunar surface on their own.

DID THEY SURVIVE?
We don’t yet know for sure whether the tardigrades are still alive.

We do know that they were much more likely to have survived the crash in their dehydrated, inactive state (during which they roll into a ball called a tun) than if they had been active, according to Professor Rafael Alves Batista, of the University of São Paulo, Brazil.

“Even if they survived, they would require liquid water to become active again,” Prof Batista said.

“Water is not something one finds on the surface of the moon today.”

Prof Batista said the tardigrades would be unable to reproduce in their dehydrated state.

But the astrophysicist* urged caution for space agencies and businesses exploring the universe.

“It is always good to be cautious to avoid interfering with the environment being studied,” he said.

“However, in the particular case of the Moon we shouldn’t worry too much about contamination, since it is pretty much lifeless.

“In fact, human waste was already left there during past missions.

“On the other hand, we should be careful when sending missions elsewhere.

“Had this happened in Mars, for example, things could play out very differently.”

ABOUT BERESHEET
Israeli Moon-landing craft Beresheet was about the size of a washing machine and weighed 500kg.

It was launched to try to become the first privately funded spacecraft to land on the Moon. An artist’s illustration of the Beresheet lander if it had landed safely on the Moon, with Earth in the background. Picture: SpaceIL

As Beresheet descended toward the lunar surface, one of its landing engines failed, causing it to crash at high speed on April 11.

About 11 days after the collision, NASA’s Lunar Reconnaissance Orbiter passed over the crash site and took photos, showing that the crash had not created a crater.

Instead, it kicked up a spray of moondust from the surface. 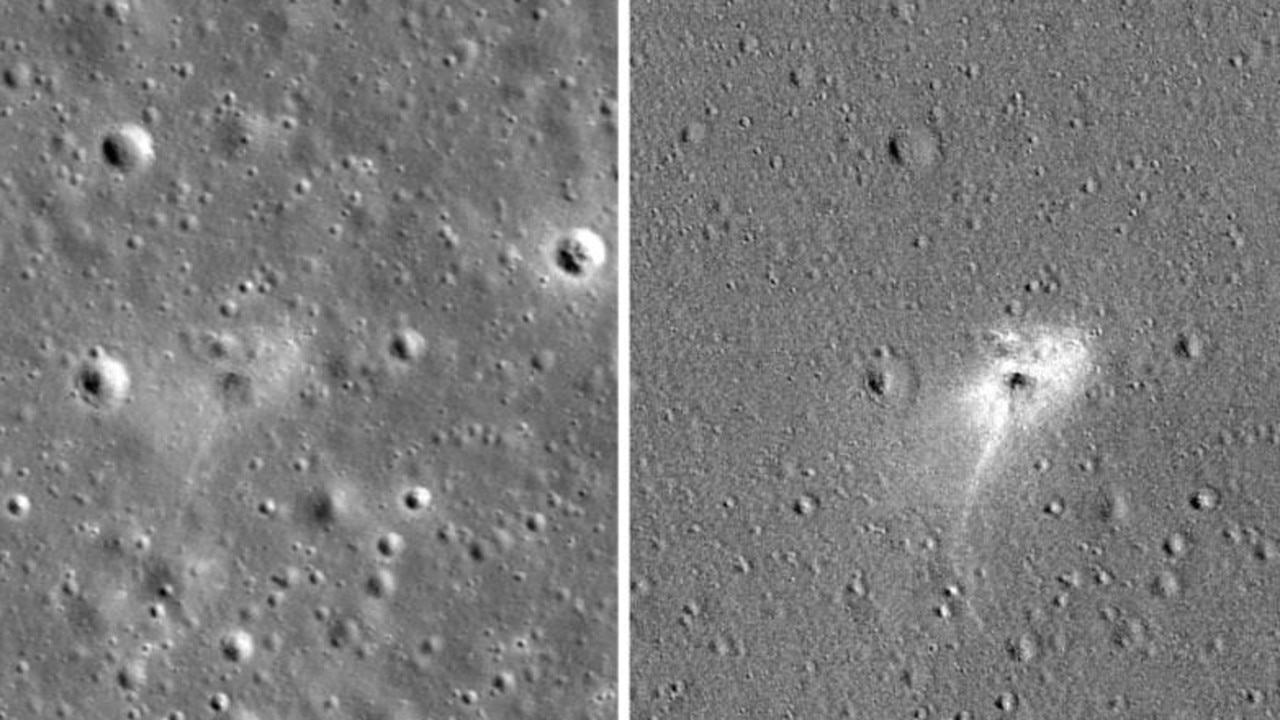 Left shows an image of the Beresheet crash site. Right shows the same image but edited to reveal dust disturbed by the crash (white). Picture: NASA

SpaceIL will try again in about three years’ time.

Beresheet — whose name is Hebrew* for Genesis — launched from Florida, US as part of a ride share with Elon Musk’s SpaceX.

It then circled the Earth in bigger and bigger orbits until it was captured by the Moon’s gravity.

The time capsule on board included a picture of Israeli astronaut Ilan Ramon, who died on the space shuttle Columbia in 2003, as well as the lunar library and the tardigrades.

The lander sent mission control a selfie as it descended towards the lunar surface moments before the failure.

Engineer Ami Halbersberg said: “The inevitable* end was that it fell to the Moon’s surface not as one piece.” This story was originally published in The Sun and is reproduced here with permission.

The Eagle has landed … and man walks on the moon

CLASSROOM ACTIVITIES
Why tardigrades?
Of the millions of species on earth why were tardigrades chosen to be sent to the moon?

Make a list of reasons why tardigrades were a good choice for a lunar expedition. Use the article to help you. You may also come up with some reasons of your own.

Why does Professor Batista urge caution when sending things into space? What concerns might he have?

Write a list of things to consider when selecting items to take and leave in space.

2. Extension
What a terrific idea to have a “back-up of humanity” kept on the moon in case a disaster on earth destroyed our written history and recorded scientific knowledge.

However, how will anyone know it is there? The people that put it there may no longer be around nor might any government officials that know it’s there.

We need to get the message out to as many people as possible. One way could do this is to teach all children a nursery rhyme or riddle that refers to the lunar library and when we might need it. It should be catchy and easy to remember and a bit fun so that children want to learn it.

Write a nursery rhyme or a riddle that can be taught to children across the world so that everyone knows that it is available in an emergency.

VCOP ACTIVITY
New Moon and the Tardigrades
Write a story about being one of the many Tardigrades that survived the crash and how fuel from the Beresheet lander rehydrated everyone again. Only problem was, when you woke up, you were stuck on the Moon. You can salvage items from the crash site to start to build the New Moon civilisation. Think about the challenges you might face, and how you can overcome them. Will you have any visitors from Earth? What will they find?

Use your VCOP to connect with the audience and create a strong writer’s voice.

HAVE YOUR SAY: Do you think it is wise to send tardigrades and other back-up items into space?
No one-word answers. Use full sentences to explain your thinking. No comments will be published until approved by editors.