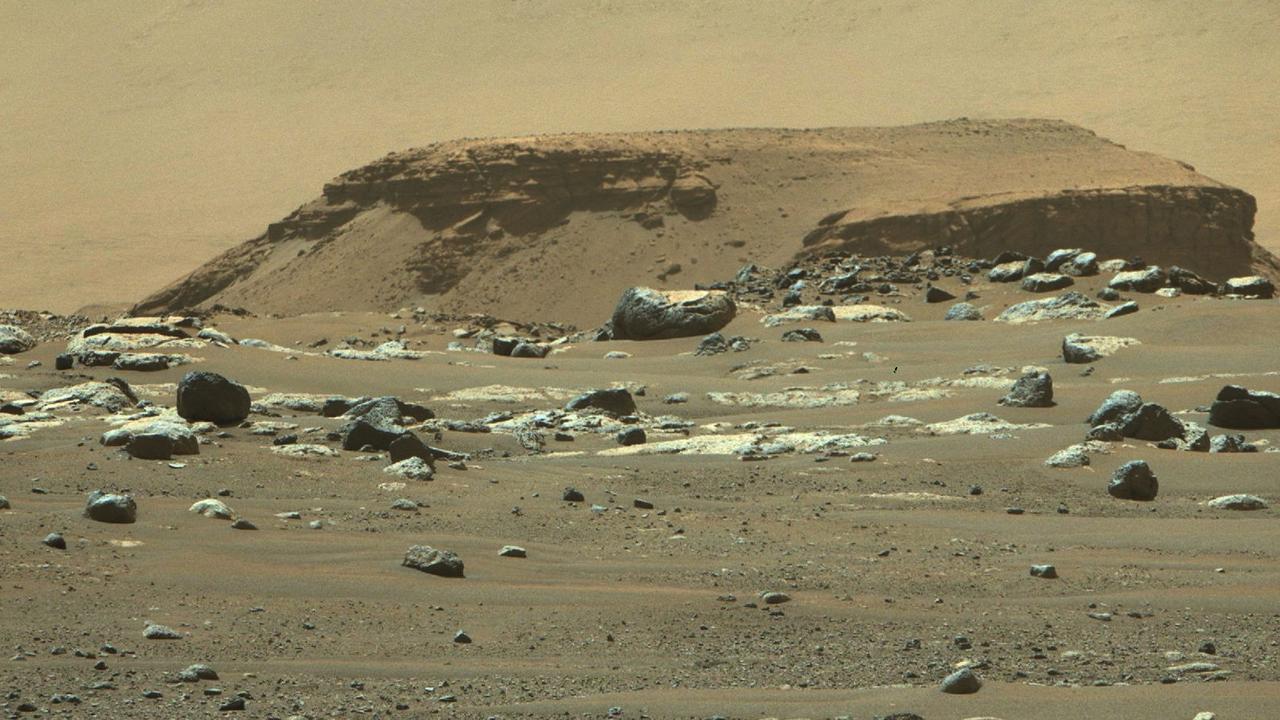 A tall outcrop of rock, with layered deposits of sediments in the distance, signs of an ancient, long-vanished river delta in Jezero Crater, Mars, taken by NASA’s rover Perseverance. Picture: NASA/JPL-Caltech

Scientists have a new idea about how Mars went from being a wet world to the desert it is today.

Billions of years ago there was a lot of water on the surface of Mars. Until now, many scientists thought the water had escaped out into space.

The new idea is that it could have been absorbed into the Martian crust.

Researchers have released a study in recent days that suggests between about 30 per cent and 99 per cent of Mars’ water may now be trapped within minerals in the Martian crust.

“We find the majority of Mars’ water was lost to the crust. The water was lost by 3 billion years ago, meaning Mars has been the dry planet it is today for the past 3 billion years,” said California Institute of Technology PhD* candidate Eva Scheller, lead author of the NASA-funded study published in the journal Science.

Early in its history, Mars may have had liquid water on its surface about equivalent in volume to half the Atlantic Ocean — enough to have covered the entire planet with water perhaps up to nearly 1.5km deep. HOW DID THE SCIENTISTS COME UP WITH THE IDEA?
Water is made up of one oxygen and two hydrogen atoms*, which is why its scientific symbol is H2O.

The amount of a form of hydrogen (called deuterium) present on Mars provided some clues about the water loss.

Most hydrogen atoms have just a single proton* within each atom’s nucleus*. Deuterium is different. It’s called “heavy” hydrogen because it has both a proton and a neutron* in the nucleus of each atom.

“There are three key processes within this model: water input from volcanism*, water loss to space and water loss to the crust,” Ms Scheller said.

The scientists used the model to help them calculate how much water was lost to space and to the crust.

The researchers suggested that a lot of the water did not actually leave the planet, but rather ended up trapped in various minerals that contain water as part of their mineral structure, clays and sulfates in particular.

IS THIS WATER USEFUL?
Though in total there is thought to be a lot of this trapped water on Mars, it still may not be useful for future astronaut missions to the planet.

“The amount of water within a rock or mineral is very small. You would have to heat a lot of rock to release water in an appreciable amount,” Ms Scheller said. Valley networks on Mars, imaged by NASA’s Viking I orbiter in September 1976. They may have been formed by subglacial water. Picture: NASA/JPL

Mars InSight lander hits itself with a shovel

CLASSROOM ACTIVITIES
1. Vocabulary challenge
There are lots of scientific words used in this article. Use this partner challenge activity to help you better understand and remember some of them!

Choose five words from the story that are new or interesting to you.

Write a “clue” for each word. You may use your own pre-existing knowledge, things you learnt from the article, dictionaries and other sources to help you write your clues. (e.g. Clue: There is one in a normal hydrogen atom’s nucleus. Answer: proton)

Pair up with a partner. Take turns to give each other a clue. See if you can give the correct word to answer each of your partner’s clues.

Repeat step 3 with a different partner.

2. Extension
Verbally retell this news story (to a partner or as an audio recording), ensuring you include all 5 of your chosen vocabulary challenge words from the activity above.