Then US President Richard Nixon gives an "OK" sign as he greets Apollo 11 astronauts Neil Armstrong, Michael Collins and Buzz Aldrin in a quarantine van on July 24 aboard the USS Hornet after splashdown and recovery in the Pacific Ocean. Picture: AP

Apollo 11 astronaut Michael Collins this week returned to the exact spot where he flew to the moon 50 years ago with Neil Armstrong and Buzz Aldrin.

Collins said he wished his two moonwalking colleagues* could have shared the moment at Kennedy Space Center’s Launch Complex 39A, the rocket launch site on Merritt Island, Florida, US, for humanity’s* first moon landing.

“Wonderful feeling to be back,” the 88-year-old command module pilot said on NASA TV. “There’s a difference this time. I want to turn and ask Neil a question and maybe tell Buzz Aldrin something, and of course, I’m here by myself.”

Armstrong died seven years ago at the age of 82 and Aldrin wasn’t able to attend because of his busy program of anniversary celebrations.

At NASA’s invitation, Collins marked the exact moment — 9.32am on July 16, 1969 — that the Saturn V rocket blasted off. He was seated at the base of the pad alongside Kennedy’s director, Robert Cabana, a former space shuttle commander. Astronaut Michael Collins, right, speaks to Kennedy Space Center Director Robert Cabana at Launch Complex 39A on Tuesday July 16 about the moments leading up to launch at 9.32am on July 16, 1969. Picture: NASA via AP

Collins recalled the tension* surrounding the crew that day.

“Apollo 11 … was serious business. We, crew, felt the weight of the world on our shoulders. We knew that everyone would be looking at us, friend or foe*, and we wanted to do the best we possibly could,” he said.

Collins remained in lunar orbit, tending to Columbia, the mother ship, while Armstrong and Aldrin landed in the Eagle on July 20, 1969, and spent 2.5 hours walking the grey, dusty lunar surface.

Collins’ return to the launch pad and a reunion on Tuesday at the Kennedy Space Center with past and present launch controllers, astronauts from other missions and other space scientists, kicked off a week of celebrations and revelations* marking each day of Apollo 11′s eight-day voyage. Kids on Space Camp cheer as thousands of rockets blast off at once in an attempt to set a world record during Apollo 11 50th anniversary celebrations at Huntsville, Alabama in the US. Picture: AP

KIDS COUNTING DOWN
In Huntsville, Alabama, US, where the Saturn V was developed, around 4900 model rockets lifted off at once, commemorating* the moment the Apollo 11 crew blasted off for the moon. More than 1000 children attending Space Camp counted down … “5, 4, 3, 2, 1!” — and cheered as the red, white and blue rockets created a grey cloud, at least for a few moments, in the sky.

The US Space and Rocket Center was trying for an altitude* of at least 30m by all the model rockets to set a new Guinness World Record. Apollo 15 astronaut Al Worden helped with the mass launching. Also present were all three children of German-born rocket genius Wernher von Braun, who led the development of Saturn V.

“This was a blast*. This was an absolute blast,” said spectator Scott Hayek. “And, you know, what a tribute … to see the rockets going off.” Some of the model rockets launched at the US Space and Rocket Center in Huntsville, US. Picture: AP

Another spectator, Karin Wise, was 19 during Apollo 11 and recalled being glued to TV coverage.

“So, to bring my grandchildren here for the 50 anniversary, was so special,” she said. “I hope they’re around for the 100th anniversary.”

ASTRONAUT’S BIG BREAKFAST
NASA this week released a photo of the Apollo 11 astronauts sitting down to their last breakfast before their historic flight to the moon.

Armstrong, Collins and Aldrin all chose the same thing — steak and eggs, coffee and a slice of cake. Apollo 11 astronauts Neil Armstrong, Michael Collins and Buzz Aldrin enjoyed a pre-launch breakfast before suiting up for the mission.

It wasn’t a coincidence but a tradition started by Alan Shepard eight years earlier when he became the first US man in space.

The high protein meal was meant to make him feel full without making him feel like he needed to go to the toilet for a few hours.

After the success of Shepard’s flight, the suborbital Freedom 7, this became astronauts’ traditional pre-launch breakfast.

FORMS TO FILL IN AND GERMS TO AVOID
One of the more surprising revelations to come out of this week’s 50th anniversary celebrations is that the Apollo 11 astronauts had to fill in customs forms to re-enter the US, just as Australians would before arriving home from overseas.

And, just like regular travellers, the astronauts had to say where they’d been (a stopover on the moon) and declare what they were bringing back to the US in their luggage: moon rocks, moon dust and other lunar samples.

They signed the customs forms before they arrived in Hawaii — a US state — upon their return to Earth on July 24, 1969. Part of the customs form signed by the returning Apollo 11 astronauts. Picture: Twitter

In an interview with SPACE.com, NASA spokesman John Yembrick said it took two more days for the astronauts to return to Hawaii on July 26, where they were welcomed with a July 27 ceremony at Pearl Harbor.

He said NASA then transported them to Houston, Texas, while still in their quarantine trailer.

There were concerns at the time that the astronauts and their equipment could have been contaminated with moon germs or other unknown things we wouldn’t want here on Earth. 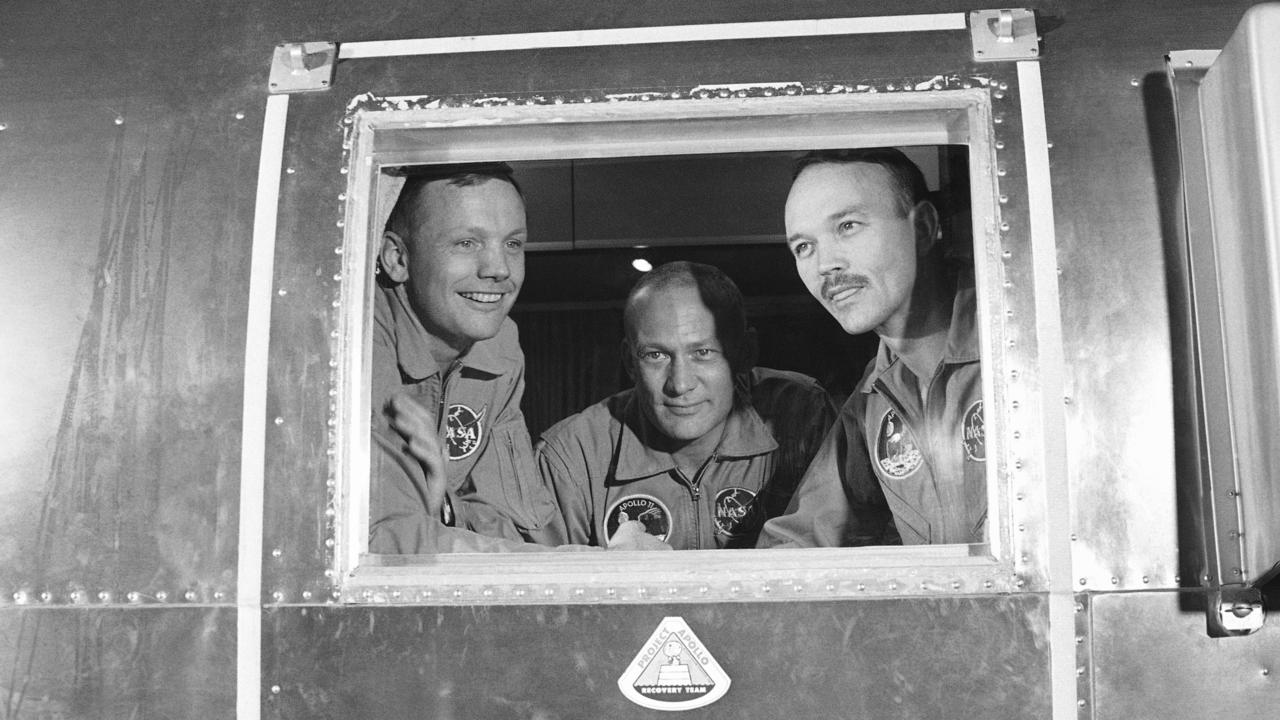 Apollo 11 crew members Neil Armstrong, Buzz Aldrin and Michael Collins sit inside a quarantine van in Houston on July 27, 1969 after returning from the moon. Picture: AP

ARMSTRONG’S SPACESUIT
At the National Air and Space Museum in Washington DC in the US, the spacesuit that Armstrong wore is back on display in perfect condition, complete with lunar dust left on the suit’s knees, thighs and elbows. A fundraising campaign took just five days to raise more than $700,000 needed for the restoration of the suit. It was taken off display 13 years ago because it was deteriorating, museum curator* Cathleen Lewis said. It took four years to restore it.

Calling Armstrong a hero, Pence said “the American people express their gratitude* by preserving this symbol of courage.” A REPLAY AND A PLAN FOR THE FUTURE
Back at Kennedy Space Center, NASA televised original launch film of Apollo 11 50 years after it happened, timed down to the second.

After the film, Kennedy director Robert Cabana talked to Collins about NASA’s next moonshot program, Artemis, named after the twin sister of Greek mythology’s Apollo.

Artemis is a plan to put the first woman and next man on the lunar surface — the moon’s south pole — by 2024.

Collins said he likes the name Artemis and, even more, likes the idea behind Artemis.

“But I don’t want to go back to the moon,” Collins told Cabana. “I want to go direct to Mars. I call it the JFK Mars Express.”

Collins noted that there are benefits to going back to the moon before trying to go to Mars. He pointed out Armstrong was among those who believed returning to the moon “would assist us mightily in our attempt to go to Mars.” 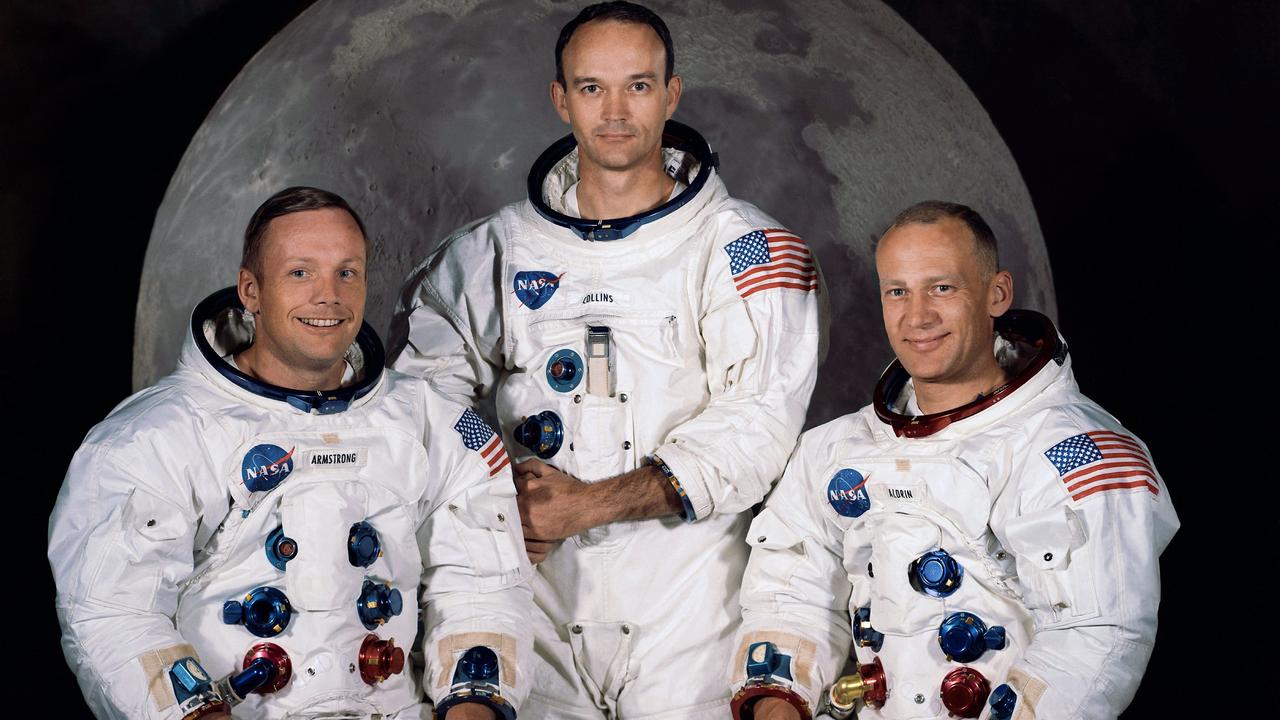 LEARN ABOUT THE MOON LANDING
To celebrate 50 years since the moon landing, Kids News has created an in-depth digital inquiry kit with 25-activity workbook. Suitable for Years 3-8.

It includes topics and curriculum-based learning activities on:

Lost moon landing film is found and for sale

Dying was not Armstrong’s greatest fear

CLASSROOM ACTIVITIES
1. What should you do?
How do you think your class should celebrate the 50th anniversary of the Apollo 11 moon landing? Create a plan for interesting activities that will help other kids understand the importance of the Apollo 11 mission.

2. Extension
Do you think there should be a mission to land humans on Mars? List reasons for and against this, or the benefits and problems or disadvantages. Use your lists to write a piece of persuasive writing giving your opinion on this question.

VCOP ACTIVITY
Space Camp
Wow wouldn’t that be amazing, to go to camp in space.

Unfortunately Space Camp isn’t going to camp in space, rather a camp (on Earth) to learn all about space. But imagine if your next school camp was actually to the International Space Station for a week!

Write a letter to parents explaining your next school camp is Space Camp.

Include where it will be, how long you will be gone for, some of the activities and sights you’ll be participating in while you are away and what you need to pack.

Include anything else that you think is important to convince your parents to sign the permission form to send you to camp.

HAVE YOUR SAY: What would you choose for your last breakfast before leaving Earth? And would you choose to be going on Apollo 11 50 years ago or on a future mission to the moon or Mars?
No one-word answers. Use full sentences to explain your thinking. No comments will be published until approved by editors.