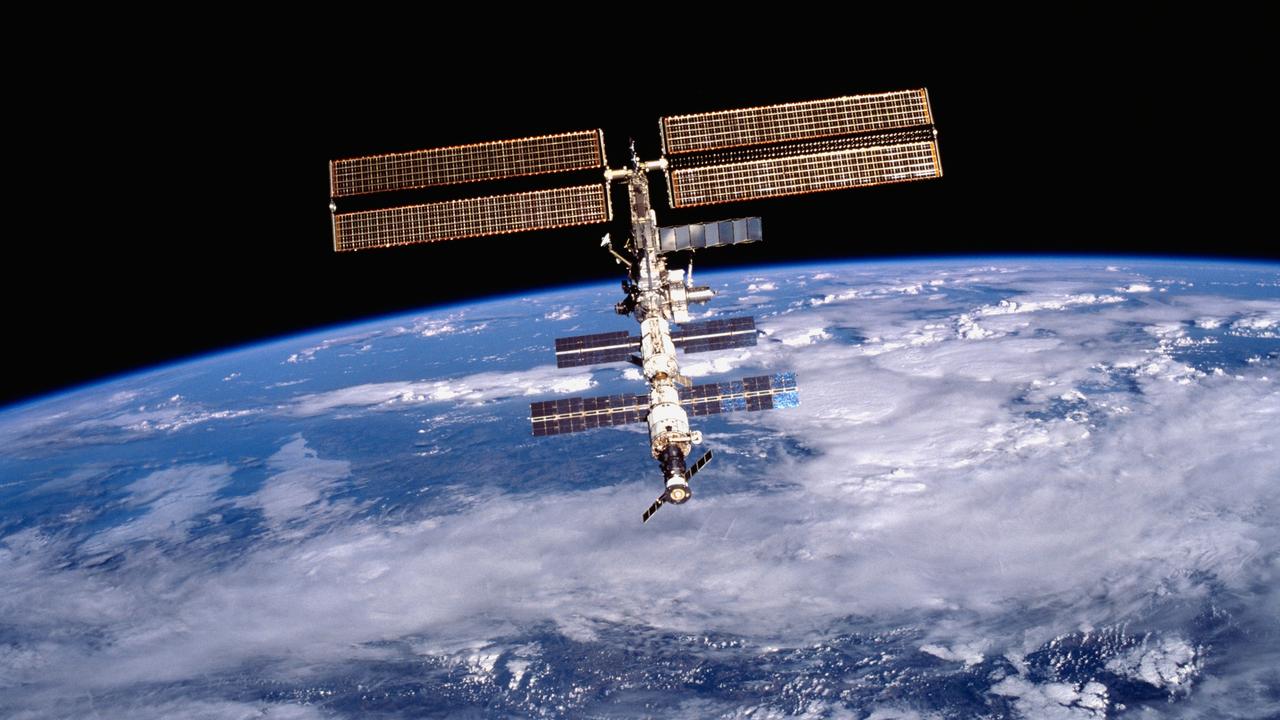 The animals are bound for the International Space Station, seen here from the Shuttle Orbiter Discovery (with the Earth in the background) after it separated from the ISS. Picture: NASA

NASA’s special animal cargo was aboard a SpaceX Falcon 9 rocket that launched from Kennedy Space Center in Florida, US, bound for the International Space Station.

Astronauts onboard the ISS will study the squid and water bears, also called tardigrades.

Baby bobtail squid have been chosen because of how their bodies work together with the bacteria inside them to make them glow.

The 3mm-long creatures could help us understand how beneficial bacteria interact with animal tissue* in a space environment. A baby bobtail squid like the ones being sent to space. Picture: Getty

Jamie Foster, a microbiologist* at the University of Florida, US, and principal investigator of the Understanding of Microgravity on Animal-Microbe Interactions experiment, said: “Animals, including humans, rely on our microbes* to maintain a healthy digestive and immune system.

“We do not fully understand how spaceflight alters these beneficial interactions.”

The squid are frozen for the flight and then thawed out for the experiments.

Baby bobtail squid don’t contain the symbiotic bacteria because they usually acquire it after they are born from the ocean around them.

Researchers plan to add the bacteria to the squid when they arrive at the ISS and see how the two interact.

They’ll then study the molecules produced and the genes that the squid turn on and off in order to make the most out of the bacteria.

This could help us understand human gut health in space and the relationship between space travel, bacteria and the immune system. Tardigrades — nicknamed water bears because they look like mini underwater bears — can survive in Earth’s most extreme environments.

The water bear experiment will focus on how the 1mm creatures survive in the high-stress environment of space.

Thomas Boothby, assistant professor of molecular biology at the University of Wyoming, US and principal investigator for the experiment, said: “Some of the things that tardigrades can survive include being dried out, being frozen and being heated up past the boiling point of water.

“They can survive thousands of times as much radiation as we can and they can go for days or weeks with little or no oxygen.

“They’ve been shown to survive and reproduce during spaceflight, and can even survive prolonged* exposure to the vacuum of outer space.”

Assistant Prof Boothby’s study will focus on how tardigrades adapt to life in low Earth orbit.

The creatures could help us learn how to protect astronaut health during long space missions. A composite image made from six frames shows the International Space Station, with a crew of seven aboard, in silhouette as it transits across the Sun on April 23, 2021, as seen from Nottingham, Maryland, US. Picture: AFP/NASA/Bill Ingalls

It is made up of many pieces, which astronauts had to send up individually on rockets and put together from 1998 to 2000

People have lived on the ISS continuously since 2000

Living inside the ISS is like living in a big house. It has five bedrooms, two bathrooms, a gym, lots of science labs and a big bay window for viewing Earth

CLASSROOM ACTIVITIES
1. Design a Space Suit
Design a space suit for a squid and a tardigrade.

2. Extension
The tardigrade is known for being able to survive very stressful situations. Imagine that you are a tardigrade. Write a list of your Top Tips for Human Kids to Survive Stressful Situations.