Space junk leaves double crater after crashing into the moon 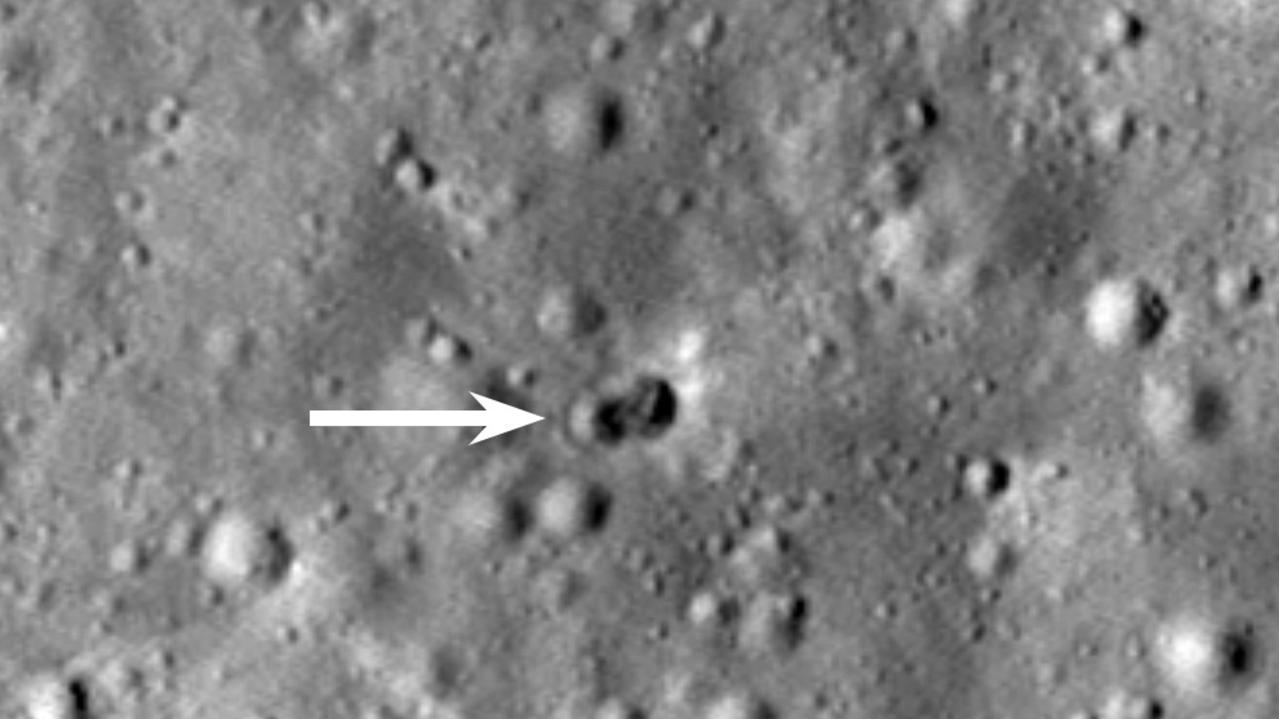 A piece of rocket space junk has collided with the moon, carving an unusual double crater into the lunar surface.

NASA has just released images of the overlapping craters, which were created when a mysterious piece of leftover rocket collided with the moon on March 4.

The images were captured by NASA’s Lunar Reconnaissance Orbiter, which has been circling the moon since 2009. The images show an eastern crater measuring 18m across and a western crater spanning 16m across. Together, they have created a depression on the lunar surface that is about 28m across at its widest point. An artist’s impression of the Lunar Reconnaissance Orbiter spacecraft that has been circling the moon since 2009 and captured the images of the double crater created by the space junk. Picture: NASA

Although astronomers knew the piece of rocket was on a collision course with the moon, there has been debate about where the space junk came from.

NASA said in a statement on June 24 that it remained uncertain about the origin of the piece of rocket, but that the double crater it created could provide a clue.

“The double crater was unexpected and may indicate that the rocket body had large masses at each end,” NASA said.

“Typically a spent* rocket has mass concentrated* at the motor end; the rest of the rocket stage* mainly consists of an empty fuel tank.

“Since the origin of the rocket body remains uncertain, the double nature of the crater may indicate its identity.” The double crater created by the space junk is pictured in the square. Picture: NASA/Goddard/Arizona State University

While NASA is unsure about the space junk’s origin, US asteroid tracker Bill Gray, who first identified the collision course in January, believes the piece of rocket is likely to be the third stage of a Chinese Long March rocket that sent a test sample capsule to the moon and back in its Chang’e-5 T1 mission in 2014.

Chinese officials, however, are not convinced the debris* is theirs, saying the upper stage of that rocket had re-entered Earth’s atmosphere and burned up.

Unlike Earth, the moon has no protective atmosphere*, so it is littered with craters that have been created when objects like asteroids regularly slam into its surface. The lunar surface, as seen from the city of Cannes in southern France, is littered with craters that have been created when objects like asteroids crash into the moon. Picture: AFP

Spacecraft, including those involved in the Apollo missions of the 1960s and ’70s, have also been deliberately crashed into the moon.

But this was the first time that experts know of that a piece of space junk unintentionally hit the lunar surface.

When he first identified the collision course, Mr Gray thought the space junk was a booster from a SpaceX Falcon rocket launched for NASA in 2015. But he corrected himself a month later, pointing the finger* at the Chinese Long March rocket. A Long March 5 rocket is prepared for launch in China’s southern Hainan province in July 2020. Picture: STR/AFP/China OUT

The US Space Command tracks lower space junk but no agencies have a system for tracking space debris so far away from Earth, meaning they rely on the work of astronomy* enthusiasts* and academics* like Mr Gray.

The Natural History Museum says there are about 2000 active satellites orbiting Earth right now, but there are also 3000 dead satellites littering space.

There are also about 34,000 pieces of space junk bigger than 10cm and millions of smaller pieces that could cause a lot of damage if they hit something else in space.

Chopper catches rocket … then drops it

CLASSROOM ACTIVITIES
1. Finding area
Based on information known from this news story, work out the approximate area of the new “double crater” on the moon’s surface.

Provide an explanation for how you reached your answer. (There are multiple ways you might work out your answer. Consider drawing a scale diagram on 1cm grid paper or using Pi to help you.)

2. Extension
Write a dramatic narrative paragraph about the moment a piece of “space junk” collides with something else in space.