A drawing of what a black hole could look like.

Ripples in space and time have helped scientists detect the biggest known collision between black holes.

The merger* formed a new supermassive black hole that’s believed to be 80 times larger than our sun.

The stunning find, led by the Australian National University, was made in July last year. But the event, which scientists believe took place about 9 billion light years* away, has only now been proven and revealed.

Professor Susan Scott, who worked on the discovery, said: “This event also had black holes spinning the fastest of all mergers observed so far. It is also by far the most distant merger observed.” A drawing of what the colliding black holes could have looked like. Picture: AAP/ANU

Researchers also detected three other blackhole collisions between August 9 and 23, which were between 3 billion and 6 billion light years away.

These resulted in new black holes that measured between 56 and 66 times larger than our sun.

“These were from four different binary* black hole systems smashing together and radiating* strong gravitational waves out into space,” Professor Scott explained.

“These detections of black hole collisions greatly improve our understanding of how many binary black hole systems there are in the universe, as well as the range of their masses and how fast the black holes spin during a merger.”

Black holes are fairly common throughout the universe.

It’s estimated that there are around 10,000 black holes at the centre of our galaxy, the Milky Way.

When they collide, black holes produce big and varying sizes of gravitational waves.

These waves can be picked up by sensors on Earth — in this case, by the LIGO observatory in the US.

Australian scientists then analysed the data picked up by the observatory, and worked out that four major black hole collisions had taken place.

Researchers now want to improve their gravitational wave detectors so that they can identify “cataclysmic* events” much further out in space.

VIDEO: In 2017, scientists discovered a medium-sized black hole for the first time

BLACK HOLES EXPLAINED
What is a black hole?
A black hole is a region of space where absolutely nothing can escape

That’s because they have extremely strong gravitational effects, which means once something goes into a black hole, it can’t come back out

They get their name because even light can’t escape once it’s been sucked in — which is why a black hole is completely dark. They are invisible. Space telescopes with special tools can help find black holes. The special tools can see how stars that are very close to black holes act differently than other stars. This is what it looks like when a star is sucked into a black hole. Picture: Pioneer Productions/Red Vision/C4 Studios

What is an event horizon?
This is like a border or point of no return. If a star gets closer than this event horizon, it will be sucked into the black hole.

What is a singularity?
The gravitational singularity is the very centre of a black hole.

This happens when stars run out of fuel — like hydrogen — to burn, causing the star to collapse.

When this happens, gravity pulls the centre of the star inward quickly and it collapses into a tiny ball.

The remaining central ball is extremely dense. If it’s especially dense, you get a black hole. 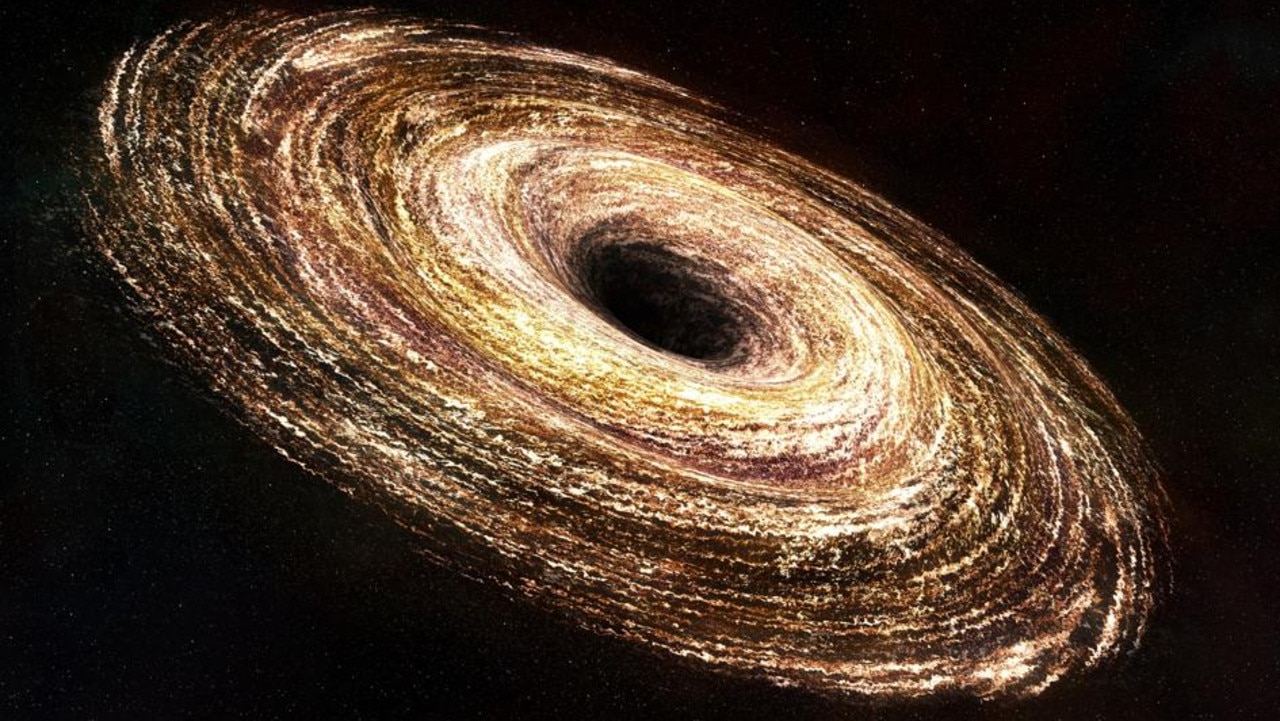 A black hole can form when a star runs out of fuel to burn and it collapses. Picture: Thinkstock

Another kind of black hole is called “stellar.” Its mass can be up to 20 times more than the mass of the sun. There may be many, many stellar mass black holes in Earth’s galaxy, the Milky Way.

Could a black hole destroy Earth?
Black holes do not go around in space eating stars, moons and planets. Earth will not fall into a black hole because no black hole is close enough to the solar system for Earth to do that.

How is NASA studying black holes?
NASA is using satellites and telescopes that are travelling in space to learn more about black holes.

CLASSROOM ACTIVITIES
1. Diagram
Draw a labelled diagram on a large piece of paper (at least A3) to demonstrate your understanding of the information in this article. You might need to use some previous knowledge of our solar system to get you started. In your diagram include: our solar system, the Milky Way and beyond, approximately how many black holes there are and where they occur, the types of black holes, the size and the number of collisions that have been detected, event horizons, singularity and anything else you feel is important. Include written information on your diagram to explain what each of these things are.

2. Extension
Do you think studying black holes and other events in the galaxy is important for us? Write a persuasive article to present your point of view. Include reasons for your opinion.

Extra Resources: Prior knowledge of our solar system could be helpful.

HAVE YOUR SAY: Do you think it is important for scientists to study black holes? What in space would you like to learn more about? Why? No one-word answers. Use full sentences to explain your thinking.