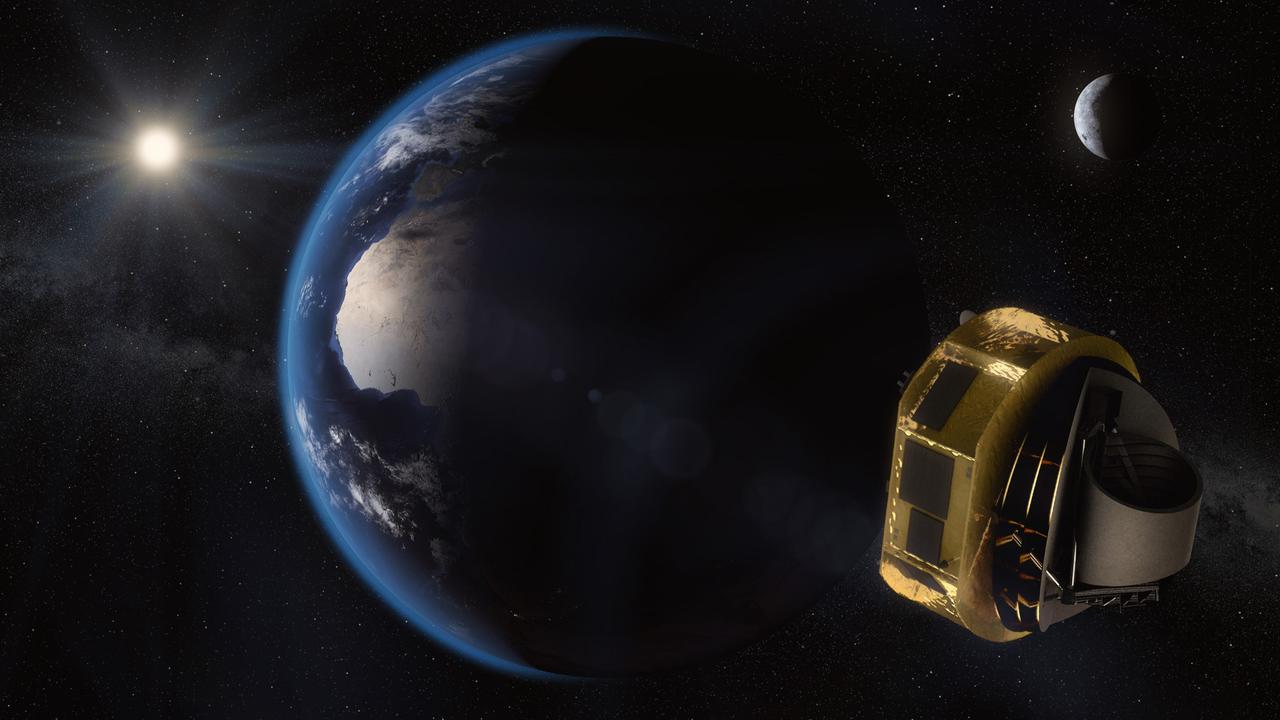 An artist’s impression of the ARIEL spacecraft which will be able to look for life on exoplanets when it is launched in 2028. Picture: European Space Agency

Scientists have discovered 24 potentially* “superhabitable” planets with conditions that may be better for life than Earth.

The mysterious worlds are older, larger, warmer and possibly wetter than our planet, making them prime* targets for future alien-hunting missions.

Researchers at Washington State University outlined their stunning find in a scientific paper published on October 5.

The planets are 100 light-years from Earth, making them too distant to visit, but possible to study with future advanced space telescopes.

Probes like the European Space Agency’s ARIEL mission, due for launch in 2028, are specially designed to seek signs of life on faraway worlds. An artist’s impression of exoplanet K2-18b and its host star. The exoplanet is known to host both water and temperatures that could support life.

“With the next space telescopes coming up, we will get more information, so it is important to select some targets,” the university’s Professor Dirk Schulze-Makuch said.

“We have to focus on certain planets that have the most promising conditions for complex life.

“However, we have to be careful to not get stuck looking for a second Earth because there could be planets that might be more suitable for life than ours.”

The team created a “superhabitability criteria”, which they lined up against 4500 known exoplanets – planets outside our Solar System.

Habitability wasn’t defined as definite signs of life, but as hosting conditions that make them ripe for its growth.

The criteria included being up to 10 per cent larger than Earth, with a surface temperature 5C above that of our own planet and an age of between 5 billion and 8 billions years. Earth is 4.5 billion years old.

Worlds also had to exist in their star’s habitable zone — defined as the area in which a planet could support water at its surface — and orbit a star that is cooler than our Sun, meaning it has a longer lifespan.

Could this planet support new life?

In total, 24 potentially “superhabitable” planets were found that may have conditions better for supporting life than Earth.

None of the planets conclusively* met all five of the criteria laid out by scientists, but one met four of them.

Researchers stressed that the results did not mean the 24 worlds definitely hosted life.

“Habitability does not mean these planets definitely have life, merely the conditions that would be conducive* to life,” the scientists said in a media release.

The distant planets could become key targets for planet-scanning space telescopes of the future.

More than 4500 exoplanets have been detected by scientists but we don’t know much about them.

The next generation of space probes, including the ARIEL mission and NASA’s James Webb Space Telescope, will be able to observe atmospheres in more detail. NASA’s James Webb Space Telescope will be able to observe space in more detail than ever before.

ARIEL aims to observe 1000 planets in detail to give us a more accurate picture of potential alien worlds.

By observing a huge number of planets, scientists hope to reveal secrets about their chemistry, formation and evolution.

The research was published in the journal Astrobiology.

WHAT IS AN EXOPLANET? An artist’s impression of NASA’s Kepler space telescope which was launched in 2009. Picture: AP/NASA

CLASSROOM ACTIVITIES
1. Draw or make a planet
Draw or create a model of an exoplanet that could be capable of supporting life. Add five labels or captions that provide factual information to explain why the planet you have drawn/made might be habitable.

2. Extension
If there is life on other planets, the landscape and life might be very different to what we know here on Earth. Imagine that you have been transported to an exoplanet where there is life. Write a vivid description of what you discover there.

HAVE YOUR SAY: Do you think there could be life on an exoplanet and what form could it be?
No one-word answers. Use full sentences to explain your thinking. No comments will be published until approved by editors.