An artist’s impression of an asteroid zooming past Earth.

Four asteroids* have zoomed past Earth this week at 80,000kmh.

NASA had put them all on its ‘close approach’ list.

Any fast-moving space object that comes within around 7.5 million kilometres is considered to be “potentially* hazardous*” by space organisations.

Asteroid 2020 KD4 is thought to be about 35m wide and was expected to pass at the much further distance of 4 million kilometres away.

Asteroid 2020 KF is thought to be about 44m wide, the largest of this group of asteroids, but most likely the farthest away.

Lastly, Asteroid 2020 KJ1, about 31m wide, shot past Earth about 2 million kilometres away

NASA and other space agencies track objects that will be coming close to Earth. But “close” in astronomic terms can be very far away in human terms. 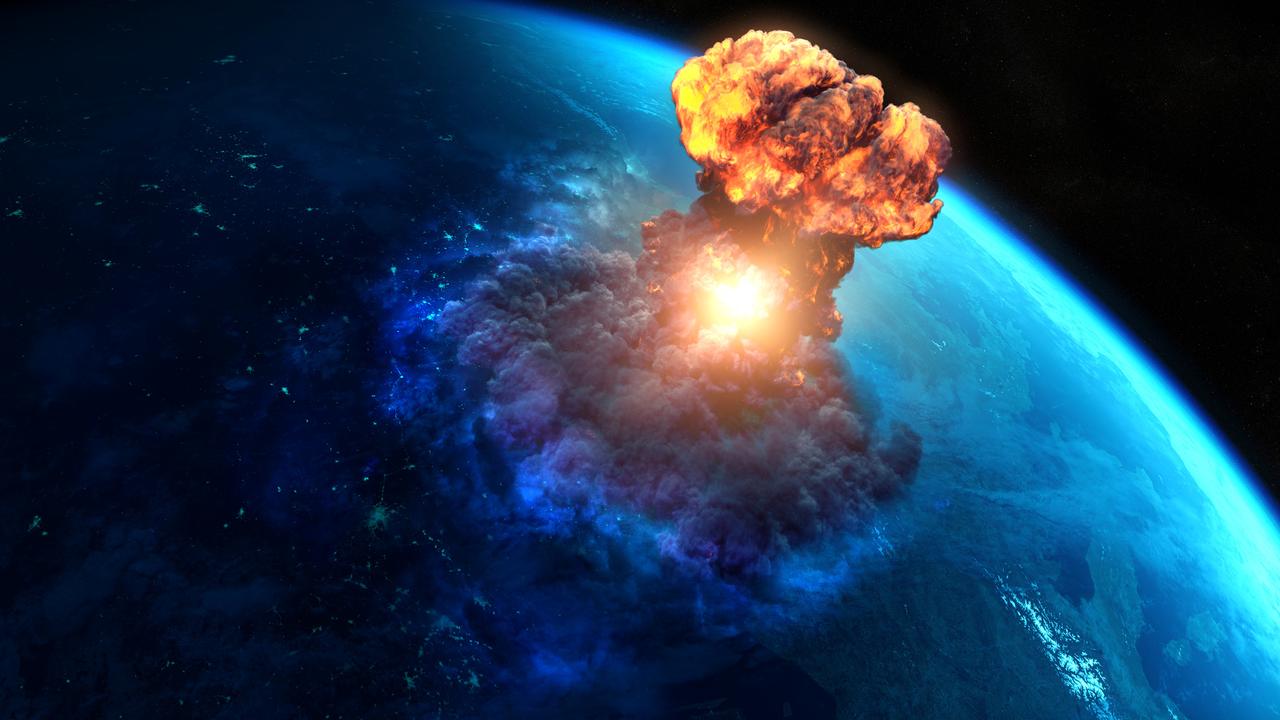 Artist’s impression of the minutes after impact 66 million years ago when an asteroid hit the Gulf of Mexico.

EARTH’S MOST FAMOUS ASTEROID
No one can be sure exactly how big the asteroid was that hit Earth and led to the mass extinction of dinosaurs 66 million years ago. Most estimates suggest it was more than 10km wide.

The crater is underwater around the Yucatán Peninsula and the Gulf of Mexico and is about 144km wide and 20km deep.

NASA, other space agencies and scientists track the orbits of known asteroids so they know what will come close to Earth well into the future. That gives them plenty of time to figure out a way to stop anything big hitting Earth. One option would be to aim some sort of spacecraft at it to knock it off course. A computer-generated image of a proposed mission to change the course of the paired Didymos asteroids, which will come a comparatively close 11 million kilometres to Earth in 2022. Picture: AFP/ESA

Every day, Earth is bombarded* with more than 90 tonnes of dust and sand-sized particles from space.

About once a year, a car-sized asteroid hits Earth’s atmosphere, creates an impressive fireball, and burns up before reaching the surface.

Space rocks smaller than about 25m will most likely burn up as they enter Earth’s atmosphere and cause little or no damage.

If a rocky asteroid larger than 25m but smaller than 1km was to hit Earth, it would likely cause local damage to the impact area. Anything larger than 1-2km could have worldwide effects.

How Do We Spot Near Earth Asteroids?

NASA confirms meteorite the size of a small car

CLASSROOM ACTIVITIES
1. Asteroid model
Create a model of an asteroid from craft materials you have available. Create 5 tags with an important fact (there are lots in the news article) on each that could be displayed alongside your model.

2. Extension
Space vocabulary can be confusing! Do your own research to find out the difference between an asteroid, a comet, a meteor, a meteoroid and a meteorite. Write a definition and draw a picture of each one.

HAVE YOUR SAY: If you were in charge of NASA, how would you stop a big asteroid hitting Earth?
No one-word answers. Use full sentences to explain your thinking. No comments will be published until approved by editors.