Saturn’s rings are slowly disappearing and are expected to completely vanish by about 300 million years. This picture of Saturn was taken by the Cassini spacecraft in 2004. Picture: NASA

Saturn’s famous rings will eventually disappear – and we have a good idea when.

The stunning belts of ice, rock and dust are slowly breaking apart.

And it’s believed that we’re just a few hundred million years away from their total disappearance.

Scientists still aren’t entirely sure how the rings formed.

But they make Saturn one of the most instantly recognisable planets in our Solar System.

Sadly, the phenomenon* won’t last forever – and “ring rain” is to blame.

This destructive process – revealed by astronomers to news website The Atlantic – means parts of the belt are being disturbed, pulled into Saturn by gravity, and ultimately vaporised*.

It’s estimated that 10 tonnes of “ring matter” is falling into Saturn every single second. 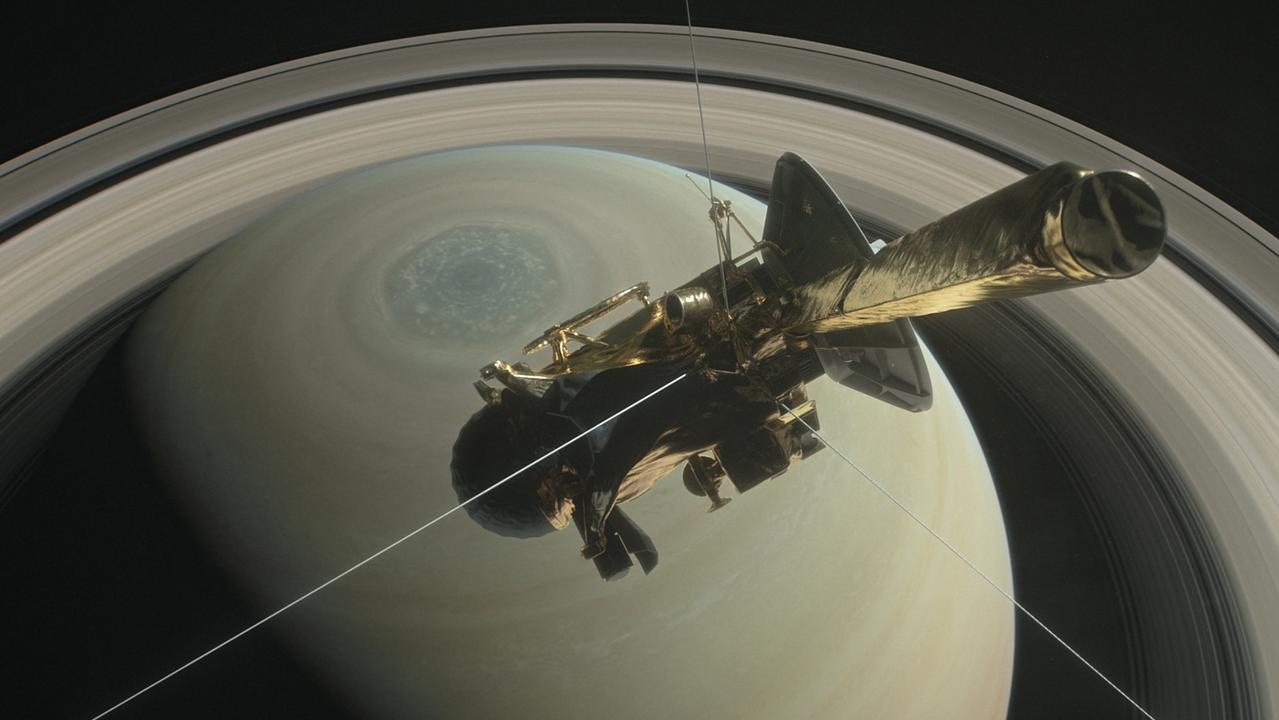 This artist’s drawing shows NASA’s Cassini spacecraft above Saturn’s northern hemisphere, heading toward its first dive between the planet and its rings in 2017. Picture: NASA/JPL-Caltech

NASA has studied the rings of Saturn extensively* through its Cassini spacecraft mission.

And at the current rate of degradation*, it’s estimated that the entire ring system of Saturn will vanish in around 300 million years.

But NASA said the core rings might have “less than 100 million years to live”.

That means Earthlings still have plenty of time to explore the stunning space phenomenon.

It also means that Saturn’s rings are still only in the early stages of their life.

The rings are estimated to be between 10 million and 100 million years old.

For context, dinosaurs walked the Earth as recently as 66 million years ago, while Earth is a whopping 4.543 billion years old. Saturn’s rings make it one of the most recognisable planets in our solar system. In this artist’s drawing the sun is shown (left) with Mercury, Venus and Earth (from left to right) in the foreground, and Uranus, Neptune, Saturn, Jupiter and Mars (left to right) in the background. Picture: European Space Agency

ABOUT THE RINGS
The rings of Saturn are mostly made of water ice particles, as well as some rock debris and dust.

It’s the most extensive ring system of any planet in our Solar System.

They have an estimated local thickness that ranges from 10m to 1km.

The rings are caught in a balancing act around the planet. Gravity is drawing them inward, while the speed of their orbit wants to fling them out to space.

But latest research suggests gravity is winning, with Saturn’s rings expected to disappear within 100 million and 300 million years. This picture shows a close-up of Saturn and its rings. Picture: NASA/JPL-Caltech

“We estimate that this ‘ring rain’ drains an amount of water products that could fill an Olympic-sized swimming pool from Saturn’s rings in half an hour,” said James O’Donoghue, of NASA’s Goddard Space Flight Centre, speaking in 2018.

“We are lucky to be around to see Saturn’s ring system, which appears to be in the middle of its lifetime.

“However, if rings are temporary, perhaps we just missed out on seeing giant ring systems of Jupiter, Uranus and Neptune, which have only thin ringlets today.”

One theory is that small, icy moons orbiting Saturn collided, smashing up into bits and creating rings.

It’s also possible these icy moons were struck by large comets or asteroids, or were broken apart by gravity.

The second popular theory is that the rings were never part of a moon, but simply leftover material from the formation of Saturn.

How Pluto lost its place as a planet

CLASSROOM ACTIVITIES
1. Showing me the info
Visually communicate information from this news story by:

2. Extension
Research to find out more about Saturn. Create five multiple choice trivia questions about the planet, then test out a classmate’s knowledge.