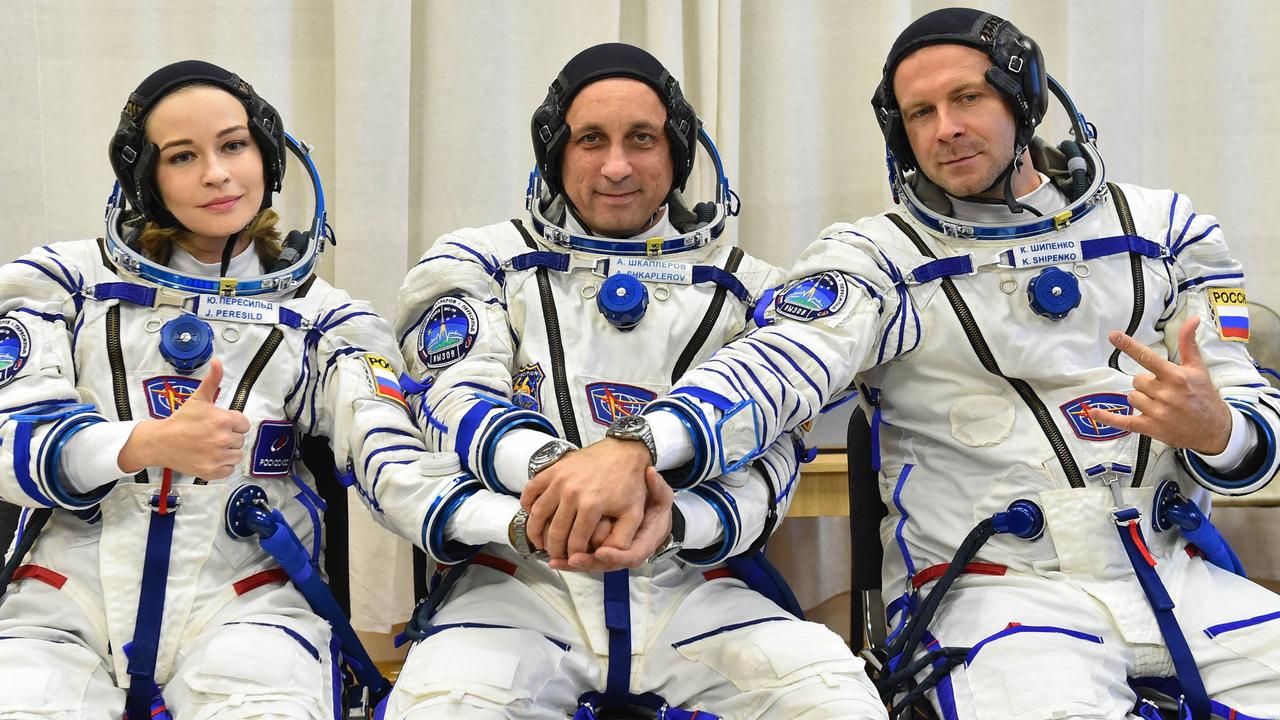 A Russian actor and a film director rocketed to space Tuesday on a mission to make the world’s first movie in orbit.

Actor Yulia Peresild and director Klim Shipenko blasted off for the International Space Station in a Russian Soyuz spacecraft, together with cosmonaut Anton Shkaplerov, a veteran* of three space missions.

Their Soyuz MS-19 lifted off as scheduled at 1:55pm local time (08:55am GMT) from the Russian space launch facility in Baikonur, Kazakhstan and arrived at the station about 3.5 hours later. 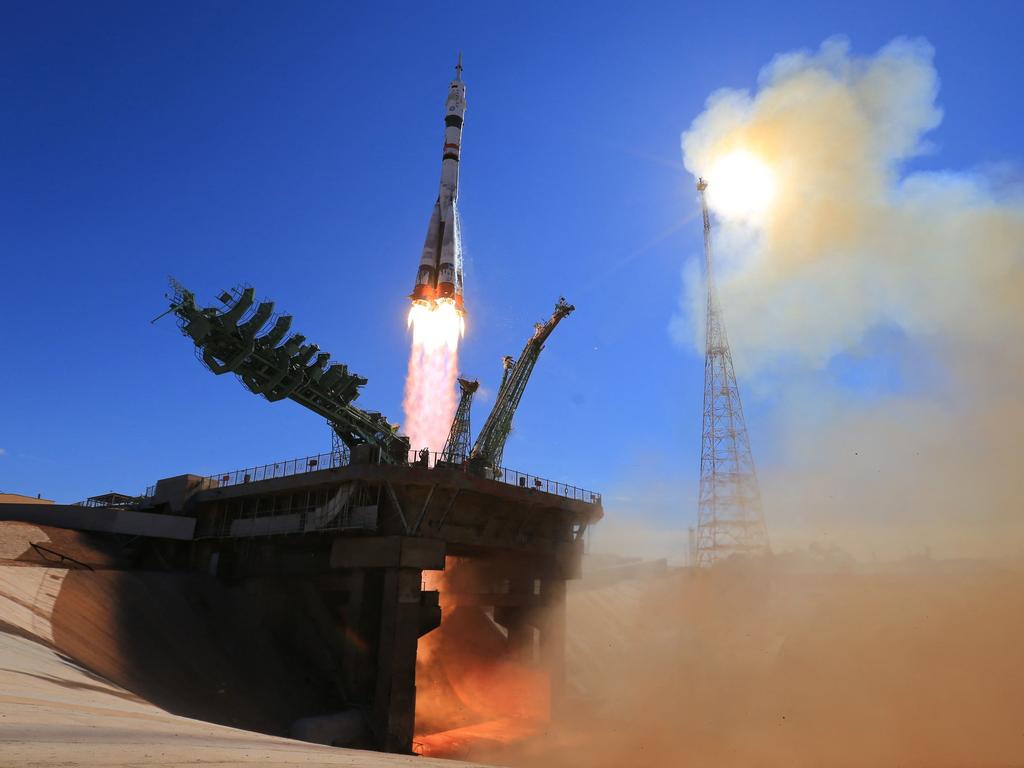 Russia’s Soyuz MS-19 spacecraft blasts off to the International Space Station from the launch pad in Kazakhstan on October 5, launching an actor and director into space to start filming the first movie made in orbit. Picture: AFP Photo/Russian Space Agency Roscosmos

Shkaplerov used manual controls to smoothly dock the spacecraft after a glitch in an automatic docking system.

The trio reported they were feeling fine and spacecraft systems were functioning normally.

Peresild and Klimenko are to film scenes of a new movie titled Challenge, in which a surgeon played by Peresild rushes to the space station to save a crew member who needs an urgent operation. After 12 days on the space outpost, they are set to return to Earth on October 17 with another Russian cosmonaut.

“We have been pioneers in space and maintained a confident position,” Peskov said. “Such missions that help advertise our achievements and space exploration in general are great for the country.”

Speaking at a pre-flight news conference Monday, 37-year-old Peresild said it was challenging to adapt to the strict discipline and rigorous* demands during training.

“It was psychologically*, physically and morally* hard,” she said. “But I think that once we achieve the goal, all that will seem not so difficult and we will remember it with a smile.” 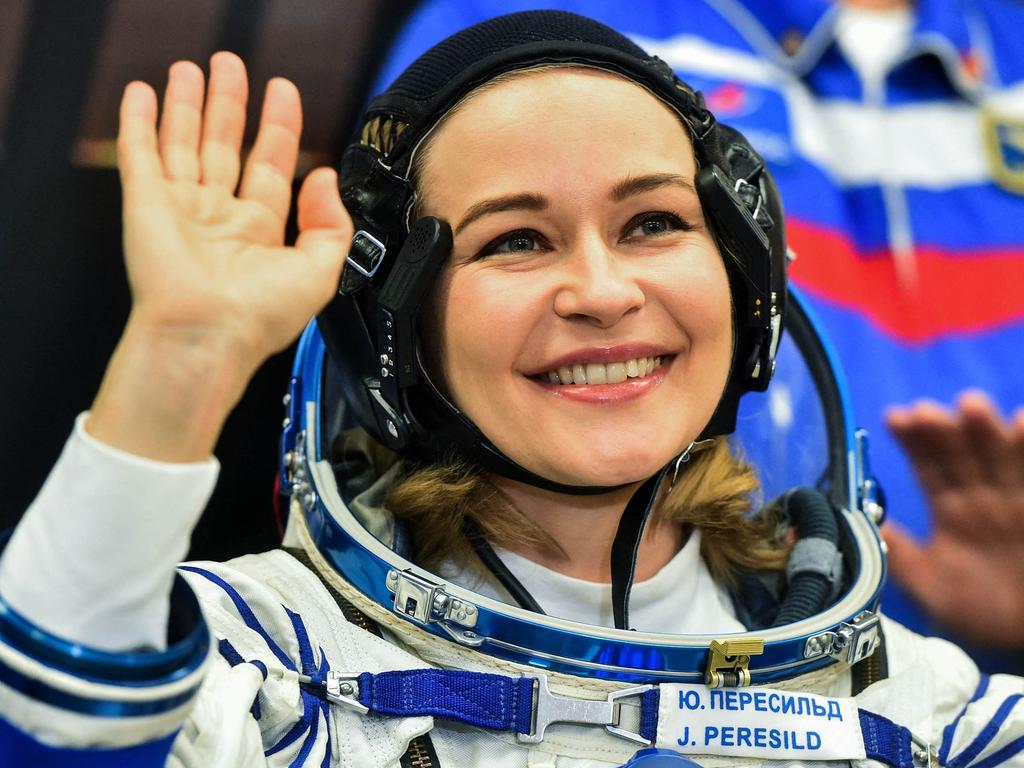 Director Shipenko, 38, also described their fast-track, four-month preparation for the flight as tough.

“Of course, we couldn’t make many things at the first try, and sometimes even at a third attempt, but it’s normal,” he said.

Shipenko, who will complete shooting back on Earth after filming the space scenes, said Shkaplerov and two other Russian cosmonauts now on board the station — Oleg Novitskiy and Pyotr Dubrov — will all play parts in the new film.

“I’m in shock – I still can’t imagine that my mum is out there,” said Peresild’s daughter, Anna, in televised remarks minutes after the launch.

After the hatches between the Soyuz and the space station were opened, the trio floated in, smiling and exchanging hugs with the station’s crew. “I feel like I’m dreaming,” Peresild said during a brief televised hook-up with mission control in Moscow.

Shipenko echoed that feeling: “We have been waiting for that for such a long time, and indeed now we feel like in a dream.”

Novitskiy, who will star as the ailing* cosmonaut in the movie, will take the captain’s seat in a Soyuz capsule to take the film crew back to Earth on October 17.

Before Russia took the lead in filmmaking in space, NASA confirmed in May last year that it had talked to actor Tom Cruise about making a movie in orbit with Elon Musk’s SpaceX providing the lift. No updates have been provided recently, but in January director Doug Liman said they were moving ahead.

“There’s just a lot of technical stuff that we’re figuring out,” Liman said. “It’s really exciting because when you make a film with Tom Cruise, you have to put stuff on the screen that no one’s ever seen before.” Australia is also getting in on the act, with a former Sydney NASA engineer joining Hollywood royalty when he flies into space next week in a rocket built by Amazon founder Jeff Bezos.

Set to become the third ever Australian to travel into space, Dr Chris Boshuizen will be part of a four-person crew aboard Blue Origin’s New Shepard launch vehicle.

Accompanying Dr Boshuizen on the joy flight is Star Trek actor William Shatner, who will become the oldest person to go to space.

“I’ve heard about space for a long time now,” Shatner said in a statement. “I’m taking the opportunity to see it for myself. What a miracle.” Star Trek actor William Shatner, pictured in 2017. Shatner starred as Captain James T Kirk in the original series and seven subsequent films, and will board a Blue Origin crewed rocket on October 12, becoming the oldest ever human in space. Picture: Mark Ralston/AFP

Shatner is well known to generations of sci-fi fans for his role as the USS Starship Enterprise’s commander for three seasons, from 1966 to 1969. He also played Captain Kirk in seven movies, one of which he directed.

However, Shatner’s actual voyage to space will be far shorter than those enjoyed on-screen. The flight will last just 10 minutes and reach no higher than about 106 km. The capsule will then parachute back to the desert floor, not far from where it took off.

veteran: person with experience in a particular field

What is the first film shot in space going to be about?

How many days will the lead actor and director spend docked at the space station?

Which American film star is in talks to make another film in space?

Who is William Shatner best known for playing?

Have you ever seen an example of a script for a play or movie? It gives information about the setting where the story takes place and what the actors will do and say.

Have a go at writing your own script for a movie scene set in space. Try to make your script interesting and suspenseful.

Draw a picture of the costume one of the actors in your script might wear if your movie was made.

Find a “who” in the cartoon – a person or an animal. Write it down.