An annular solar eclipse, often called a "Ring of Fire" eclipse in the skies over China in 2010. Picture: Getty

A “Ring of Fire” solar* eclipse will be visible across large parts of the world this weekend, including Northern Australia.

This kind of eclipse comes around ever year or two and is named after the fiery glow that appears around the edges of the Moon.

This is when the Moon moves in front of the Sun, but doesn’t totally block it.

It means the centre of our nearest star is blocked out, but the edges are still visible – creating a “Ring of Fire” in the sky.

This bright orange ring is known as an annulus, hence the name, annular solar eclipse. “An annular eclipse occurs instead of a total eclipse when the Moon is on the far part of its elliptical* orbit around the Earth,” NASA explains.

“Remember to never look directly at the Sun even during an eclipse.”

VIDEO: An annular eclipse in December 2019 seen across Asia

HOW LONG WILL IT LAST?
You’ll be able to see the beginning and end of the eclipse for about six hours in some parts of the world, and for 57 minutes in Darwin.

But the actual “Ring of Fire” will only be visible very briefly.

This occurs when the eclipse is at its most perfect positioning, and will last for just a few minutes. 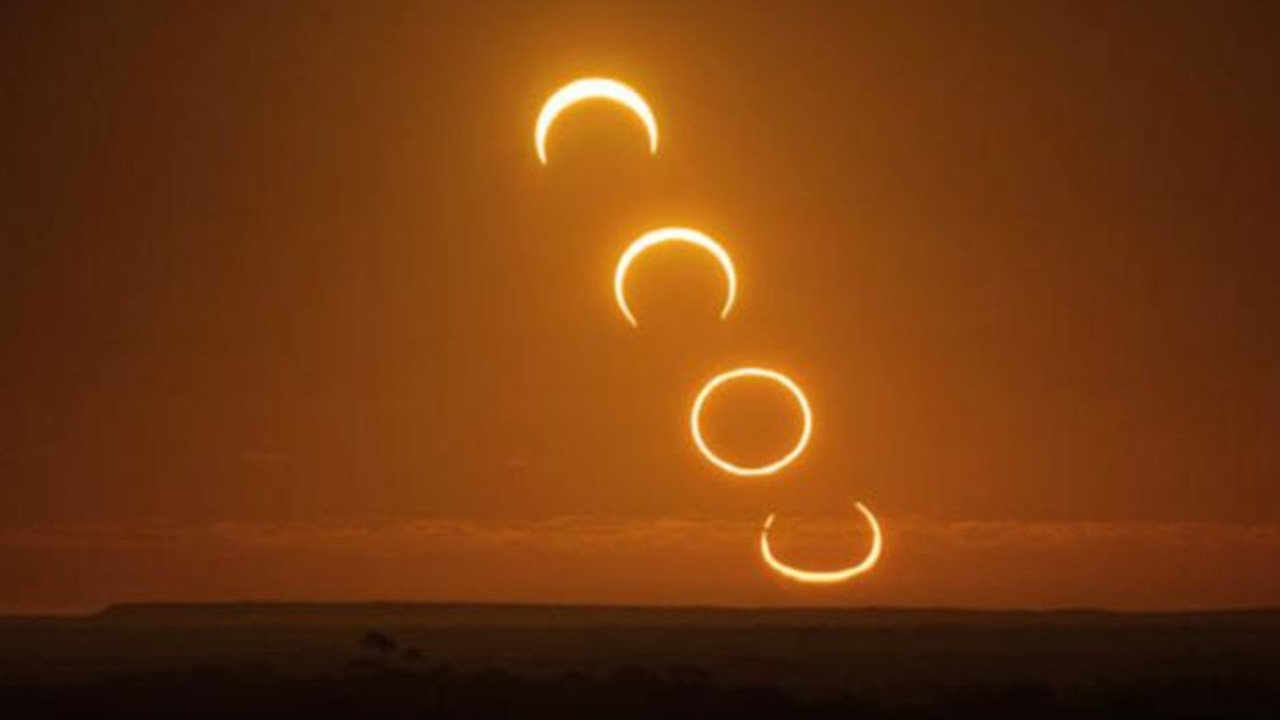 This composite image is made from putting several photos together that were taken over a period of time to show the progress of an annular eclipse in May 2013. Picture: Jia Hao/The National Maritime Museum

WHERE CAN YOU SEE IT?
Stargazers have the best opportunity to see Sunday’s eclipse in the very north of Australia, including Cape York and Darwin, and in Africa, Central Asia and South East Asia.

The eclipse will begin above the Republic of Congo and end above the Pacific Ocean.

NASA has this advice: “It’s much more important to watch the weather forecasts a day or two before the eclipse and choose a location with the best chance of a cloud-free sky during the eclipse.

“Good weather is the key to successful eclipse viewing – better to see a shorter eclipse from clear sky than a longer eclipse under clouds.”
Timeanddate.com will be streaming the event so you can get a great view, no matter where you live. Queensland’s Home Hill State High School students got out of class — with special safety glasses — to watch an annular eclipse, possibly in 2013.

WHAT IS A SOLAR ECLIPSE?
It happens when you’re in the shadow cast by the Moon, which is blocking the Sun.

This only happens when the Sun, Moon and Earth are aligned* on a straight line.

A total eclipse is when the disk of the Sun is completely blocked out by the Moon.

It’s important to not look directly at the Sun without special eye protection during a solar eclipse, as it can lead to permanent eye damage. Watching the event online is safe.

WHEN IS THE NEXT SOLAR ECLIPSE?
Between two and five solar eclipses of different types happen every year. A total eclipse happens around once every 18 months.

The next eclipse is a total solar eclipse — though not visible from Australia — which takes place on December 14, 2020.

The Moon, its history and impact on our lives

First-ever close up of the Sun

CLASSROOM ACTIVITIES
1. Give Them New Names
Imagine you have been asked to come up with new names for the “Ring of Fire” eclipse and for total solar eclipses. Choose a new and better name for each type of eclipse. For each name, write a paragraph explaining why you chose the name and why it should be used.

2. Extension
Design an illustrated guide that will help younger kids understand the most interesting and important information about solar eclipses. Use the pictures in today’s story to help you.

HAVE YOUR SAY: Have you ever seen a solar eclipse?
No one-word answers. Use full sentences to explain your thinking. No comments will be published until approved by editors.