Three space travellers have arrived at the International Space Station after blasting off on a Russian spacecraft that for the first time used a fast-track manoeuvre* to reach its destination in just over three hours.

NASA astronaut Kate Rubins and Russian cosmonauts Sergey Ryzhikov and Sergey Kud-Sverchkov lifted off as scheduled on October 14 from the Baikonur space launch facility in Kazakhstan for a six-month stint on the station.

For the first time, they did a two-orbit approach and docked with the space station in a record three hours and three minutes after lifting-off on a Soyuz rocket.

It normally takes about six hours for a Soyuz spacecraft to chase down the International Space Station, and the Soyuz must complete about four orbits around the Earth. 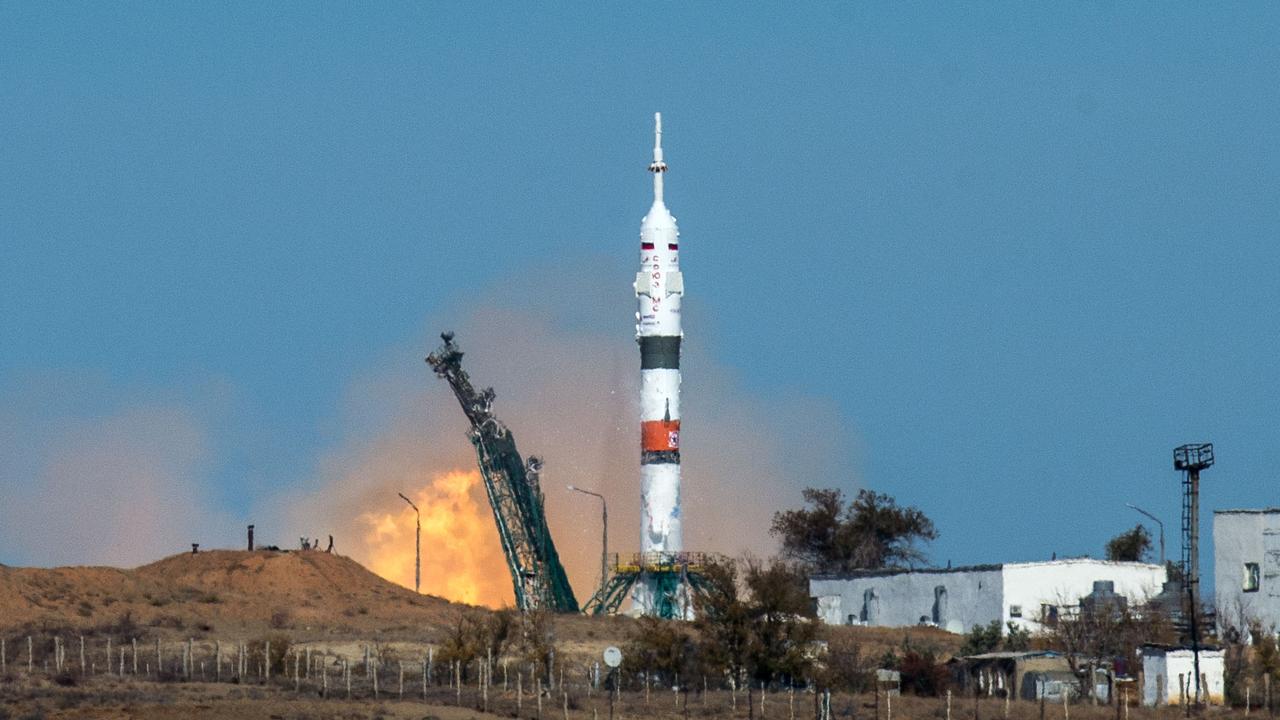 But this time, the Soyuz MS-17 made it in only two orbits, making it the first crewed Soyuz spacecraft to do what is known as the “fast-track rendezvous method”.

Russia has previously tested the two-orbit rendezvous method with its Progress cargo resupply spacecraft, which is almost identical to the Soyuz spacecraft used to transport crew.

So far, five Progress missions have used the two-orbit rendezvous method to reach the space station, the fastest in three hours and 48 minutes.

Both Soyuz and Progress missions traditionally* took about two days to reach the International Space Station, an orbiting* laboratory* 400km above Earth that has housed international crews of astronauts continuously* for almost 20 years.

The arriving Expedition 64 crew was welcomed to the space station by NASA commander Chris Cassidy and cosmonauts Anatoly Ivanishin and Ivan Vagner, from the Russian space agency Roscosmos, who have been aboard the space station since April and are scheduled to return to Earth in a week. The International Space Station has been orbiting 400km above Earth for 20 years. Picture: NASA

Speaking before the launch, Rubins said her crew spent weeks in quarantine* at the Star City training facility near Moscow and then at the launch facility to avoid any threat from the coronavirus.

“We spent two weeks at Star City and then 17 days at Baikonur in a very strict quarantine,” Rubins said.

She said the crew wore masks and had regular coronavirus tests to get the all clear before their mission, which will see them conduct a number of scientific experiments.

“We’re planning to try some really interesting things like bio-printing tissues and growing cells in space and, of course, continuing our work on sequencing DNA,” Rubins said. Ryzhikov, who will be the station’s skipper, said the crew would try to find and fix a slow oxygen leak somewhere in the station’s Russian section. The small leak hasn’t posed any immediate danger to the crew.

“We will take with us additional equipment which will allow us to detect the place of this leak more precisely,” he said.

CLASSROOM ACTIVITIES
1. Storyboard
Create a storyboard with four frames to retell as much information as possible from this news story. To ensure you convey the facts using predominantly pictures, you may include a maximum of 12 words of text.

(If you want to check how successful you have been at this task, try showing your storyboard to somebody who has not read the news article. Can they figure out what it is about?)

Now, pick three plain and simple words from the article. Add these to the BASE WORD column of the table. Up-level these words to be higher level or more exciting. Add these new words to the UP-LEVEL column.

Next, come up with an antonym for the word (the opposite) and up-level it in the second UP-LEVEL IT column.

If there was a higher level word to use, why do you think a lower level one was written in the article? Try putting your up-levelled word into the article and re-read the sentences. Do they sound better with your new words or theirs? Why do you think this is?

HAVE YOUR SAY: If you could travel to any destination in three hours, where would you go and why?
No one-word answers. Use full sentences to explain your thinking. No comments will be published until approved by editors.