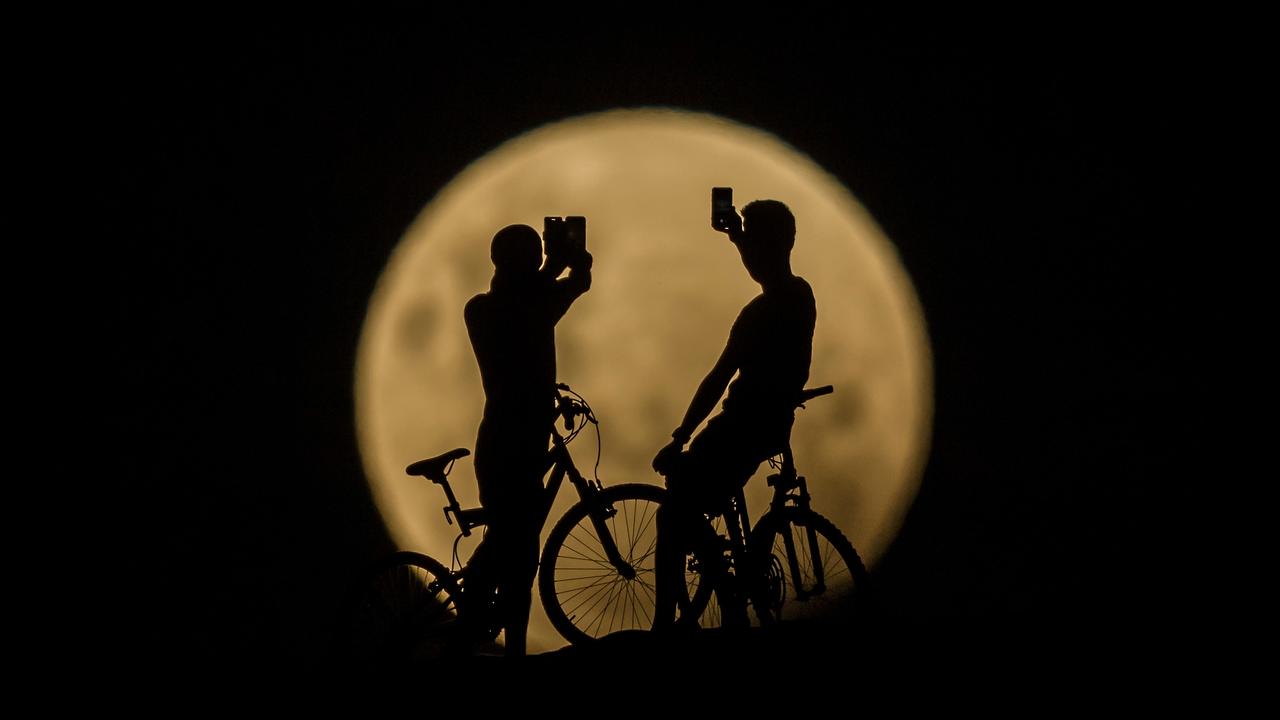 Now is the perfect time to become a stargazer — just in time for an incredible total lunar* eclipse early on July 28, a show of five planets in the evening sky and Mars looking its best since 2003.

So get up, rug up and look up at the night sky for a real treat. Here’s a guide to what to look for. There are so many amazing things in the night sky to get out of bed to see this week. Picture: istock

We are in a five-planet season because Jupiter and Saturn are on the same side of the Sun.

Look to the sky after sunset, and if you have a good view of both the eastern and western horizons* you’ll see the planets stretched out in a line. Mars and Saturn will be rising in the east, Jupiter will sit high overhead, and bright Venus and faint Mercury will be setting in the west.

The moon began its tour of the planets on Sunday, July 15. It was a thin crescent* low in the western sky, with Mercury just to the left, with bright Venus sitting above.

The following night the moon was near Venus. Then on Thursday, July 19, the First Quarter Moon was below the bright star Spica.

On July 21, the moon made its way to Jupiter and by July 25 it will meet up with Saturn.

The Full Moon completes the tour on July 27 when it joins Mars shining at its best and brightest. This chart shows planet locations stretched out in a line west-east on 20 July 2018 at 6pm. West is to the left of the chart. Picture: Martin George

Each month when we see the full moon, we are seeing the moon “in opposition”. This means the moon is directly opposite the sun, rising as the sun sets and setting as the sun rises.

On July 27, both the moon and Mars are opposite the Sun, which brings Mars much closer to Earth than usual.

Mars is closest to Earth on July 31 at a distance of 58 million kilometres. Its fast increase in brightness over the past few weeks has been amazing to see.

Until early September, Mars will outshine Jupiter and become the third-brightest object in the night sky, behind the moon and Venus.

The reason that Mars can vary in brightness so much is because it’s our neighbour in space and it follows an elliptical — oval — orbit. Throughout 2017, Mars was fairly dull as it was on the opposite side of the Sun to Earth, at its most distant.

The distance between Earth and Mars can vary by almost 50 million kilometres, because of the two planets’ elliptical orbits. 2018 is definitely one of the best.

With Mars a striking red in the night sky, what else could be better than teaming up with a blood-red Moon. This is a series of images of the moon during another special lunar eclipse called a super blue blood moon, which happened in January this year. This event is the combination of a blue moon, a super moon and a total eclipse. Picture: AFP/Kazuhiro Nogi

When we look to the skies during the early hours of July 28, red Mars will be sitting just above and to the left of the eclipsed moon.

Across Australia everyone will see the moon enter Earth’s shadow at the exact same moment. In fact, everyone on the night side of Earth will see the eclipse together.

Western Australia will be the only state to catch the entire eclipse. It will begin with the moon high in the northwest and end with the moon low to the western horizon.

The exact time of moonset depends on location, with the moon setting (and the sun rising) earlier at more northern latitudes*.

The advantage of seeing the eclipsed moon low to the horizon is that the moon illusion* will come into play. Our brains will trick us into thinking that the moon is larger than normal, which is why the rising and setting moon can look enormous. The super blue blood moon that happened earlier this year behind the skyline of San Francisco, US. This is a good example of the moon illusion, which happens when the moon is low in the sky, making our brains think it looks much bigger than it is. Picture: AFP/Josh Edelson

The coming lunar eclipse will be the longest of this century. The total eclipse will last for 1 hour and 43 minutes, just four minutes short of the longest possible duration*. Three things have come together to make this possible.

First, and most importantly, this eclipse will see the moon move through the centre of Earth’s shadow, making for a long and deep eclipse.

Finally, it lasts for an extra few minutes because this eclipse is happening close to the time in early July when Earth was farthest from the Sun.

What’s really interesting is that when Earth is farthest from the Sun, Earth’s “umbral shadow” lengthens and widens. The umbra is the darkest part of Earth’s shadow and is the region the moon must move through to make an eclipse.

It’s completely safe to watch a lunar eclipse and no special equipment is needed to see it. This is our last chance to see a total lunar eclipse until May 2021.

Get ready for some great planet-watching and remember to set your alarm early on July 28 to see the eclipse.

Tanya Hill is an Honorary Fellow of the University of Melbourne and Senior Curator (Astronomy), Museums Victoria This NASA photo shows Jupiter’s southern hemisphere captured by NASA’s Juno spacecraft. You can see Jupiter lined up in the night sky with four other planets this month, but not this close up! Picture: AFP/NASA

lunar: relating to the moon

horizons: the line we see where the ground meets the sky

crescent: a curved sliver of moon, as though the circle of the moon has had a smaller circle cut out of it

latitudes: a way of describing how far something is from the equator or the north or south poles

duration: how long it lasts

1. List the five planets lined up in the night sky?

2. What does it mean to say the moon is “in opposition”?

3. What date will the lunar eclipse be? Will everyone on the night side of Earth see it at the same time?

4. How long will the total lunar eclipse last for? Is that the longest possible time?

1. Use the information in the story to design information posters about Mars and the lunar eclipse.

2. Extension: Imagine that you are a reporter for Kids News. You have been asked to interview Tanya Hill, the astronomer who has written this story. You can ask her anything you would like to know, and anything that you think other kids would like to know about this story, the planets or her job. Write 10 questions that you would ask her.

QUESTIONS: Have your ever been stargazing? What did you like best? What would you most like to see if you can be out at night to see the stars and moon this week?
Explain your answer using full sentences.