NASA's Perseverance rover has carried this rocky hitchhiker about 8.5km across Mars. The picture of the rock was captured by the rover’s front left Hazard Avoidance Camera A on May 26, 2022. Picture: NASA/JPL-Caltech

NASA’s Perseverance rover has picked itself up a pet rock while on its travels across Mars.

The rocky hitchhiker has been tucked inside the rover’s front left wheel since February, riding along for about 8.5km across the Jezero Crater.

“This rock isn’t doing any damage to the wheel, but throughout its (no doubt bumpy!) journey, it has clung on and made periodic* appearances in our left HazCam* images,” said Eleni Ravanis, a student collaborator* on NASA’s Perseverance mission.

Ms Ravanis said Perseverance picked up the small rock on February 4, the rover’s 341st day (or Sol, as Mars days are called) on the Red Planet. Perseverance’s pet rock as been along for the ride while the rover explores Mars terrain like this, captured using its on-board Right Navigation Camera (NavCam) on June 10, 2022. Picture: NASA/JPL-Caltech

At the time, Perseverance was exploring a rock formation called Máaz, which scientists believe is made up of ancient lava flows.

Since then, Perseverance has carried the rock north across its landing site, which is named after the famed late* science fiction author Octavia E. Butler, and then west across the Kodiak delta, which scientists believe is what remains of the junction of an ancient river and a lake at the Jezero Crater. The rocky hitchhiker can be seen tucked into Perseverance’s while as it explores Mars. Picture: NASA/JPL-Caltech

Ms Ravanis said the rover was now in its “Delta Front Campaign”, where it is thought to have drilled into its first sedimentary* Mars rock.

“Perseverance’s pet rock is now a long way from home,” Ms Ravanis wrote in a blog for the Mars 2020 mission.

“It’s possible that the rock may fall out at some point along our future ascent* of the crater rim. If it does so, it will land amongst rocks that we expect to be very different from itself.”

Ms Ravanis, from the University of Hawaii at Mānoa said this could really “confuse a future Mars geologist* who finds it out of place”. 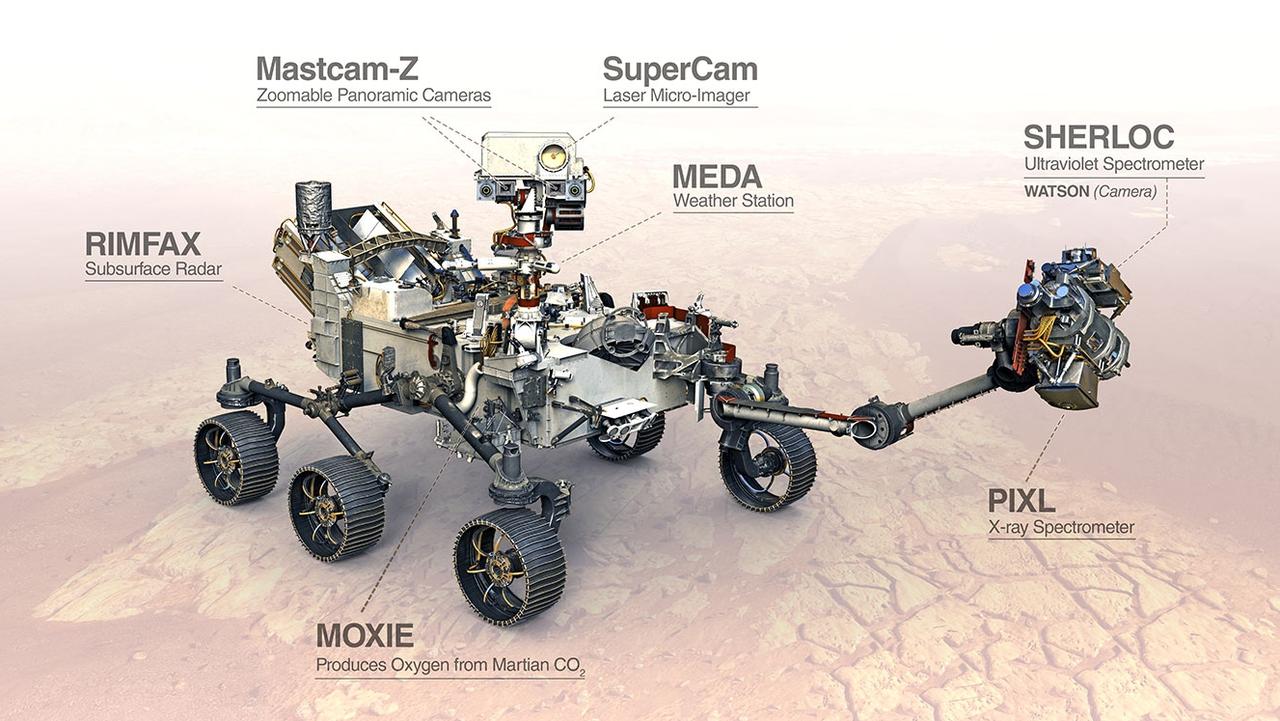 This diagram shows some of the instruments on NASA’s Perseverance rover that landed on Mars on February 18, 2021. Picture: NASA

But it’s not the first time a rock has hitched a ride on a Mars rover.

In 2004, the Spirit rover picked up a “potato-sized” rock in its rear right wheel that had to be dislodged. And the Curiosity rover, which will have been on Mars for 10 years in August, has also picked up rocks in its wheels every now and then during its mission in Mars’ Gale Crater.

“While it’s unclear exactly how long these rocks stuck around, they tended to hop off after a few weeks,” Ms Ravanis said.

“Perseverance’s current companion is therefore on its way to setting Mars hitchhiking records!”

2. Extension
Design a wheel for a Mars rover that will not pick up rocks or a wheel that can collect and store rocks for study back on earth.

VCOP ACTIVITY
Rock and roll on Mars
Mars rover Perseverance has made a new friend. It sounds a little like Wall-E and his little cockroach friend. Pitch a scene idea to Pixar sharing a new movie starring Perseverance and his pet rock.

As well as a short scene description, include a blurb or outline of what the whole movie could be about, linking in with what Perseverance is and why he is on Mars. Maybe it could be one of Pixar’s next “shorts” (one-minute animation stories).

Use your VCOP skills to connect with the audience, create imagery and emotion, and make your ideas rock!