Time to head outside in the middle of the night to watch the Orionids meteor shower. The Eales family are experienced astronomers, seen here watching the Perseids meteor shower, which happens July-August. Picture: Brendan Radke

Fireballs from Halley’s comet are lighting up the night sky across Australia this week.

The stunning annual show includes trailed meteors appearing so brightly in the night sky that they’re visible without a telescope. 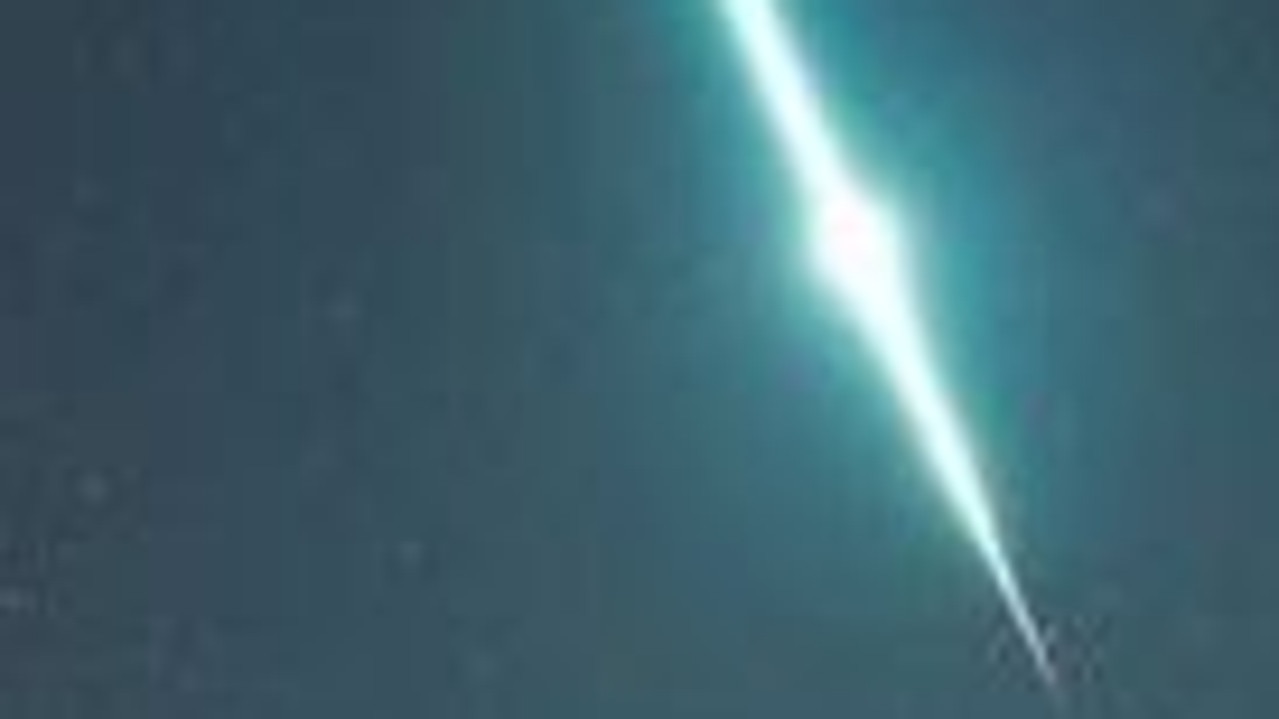 If conditions are right, you could see up to 25 meteors flash across the sky every hour, some of which will leave a trial for a few seconds.

WHAT ARE THE ORIONIDS?

Meteor showers are when chunks of debris* from asteroids or comets soar across the sky.

In this case, Orionid meteors are made up of material left behind by Halley’s comet on its 76-year orbit of the Sun.

Every October or November, Earth passes through this field of debris.

The chunks of space rock hit the atmosphere at huge speeds, and then burn up — creating a meteor shower.

They travel very quickly, reaching speeds of up to 66km per second as they soar across the night sky.

“The Orionid meteor shower is one of the best known and most reliable meteor showers in the annual calendar, visible from across the globe,” said the Royal Observatory Greenwich in the UK.

“Some people view the shower as extra special as the meteors are actually pieces of Comet 1P/Halley, famously known as Halley’s comet.

“The famous comet swings by the earth only once every 75 to 76 years but this annual shower provides some compensation* for those who may miss that once-in-a-lifetime event.” WHEN IS THE ORIONIDS’ PEAK?

Meteor showers are very predictable events, so astronomers know exactly when you have the best chance of seeing them.

This year’s Orionids were visible from October 16 and will be until October 27.

For 2019, the absolute peak of the Orionid meteor shower was October 21 and 22, with great viewing a day or so either side.

Some nights you could see as many as 25 meteors shooting across the sky every hour.

DO I NEED SPECIAL EQUIPMENT ?

It’s possible to see the Orionids with the naked eye, because it’s such an intense meteor shower.

But tall buildings, light pollution and bad weather can all hamper* your chances of catching a glimpse.

Heading out of towns and cities on a clear night, far away from nearby light gives you the best chance of seeing the Orionids or, in fact, anything out there in the night sky.

“They can be seen with the naked eye so there’s no need for binoculars or a telescope, though you will need to allow your eyes to adjust to the dark,” the Royal Observatory Greenwich explained.

“The showers will continue at a reduced rate, so if the Moon obscures the peak, you may still be able to catch a few throughout the rest of October.” 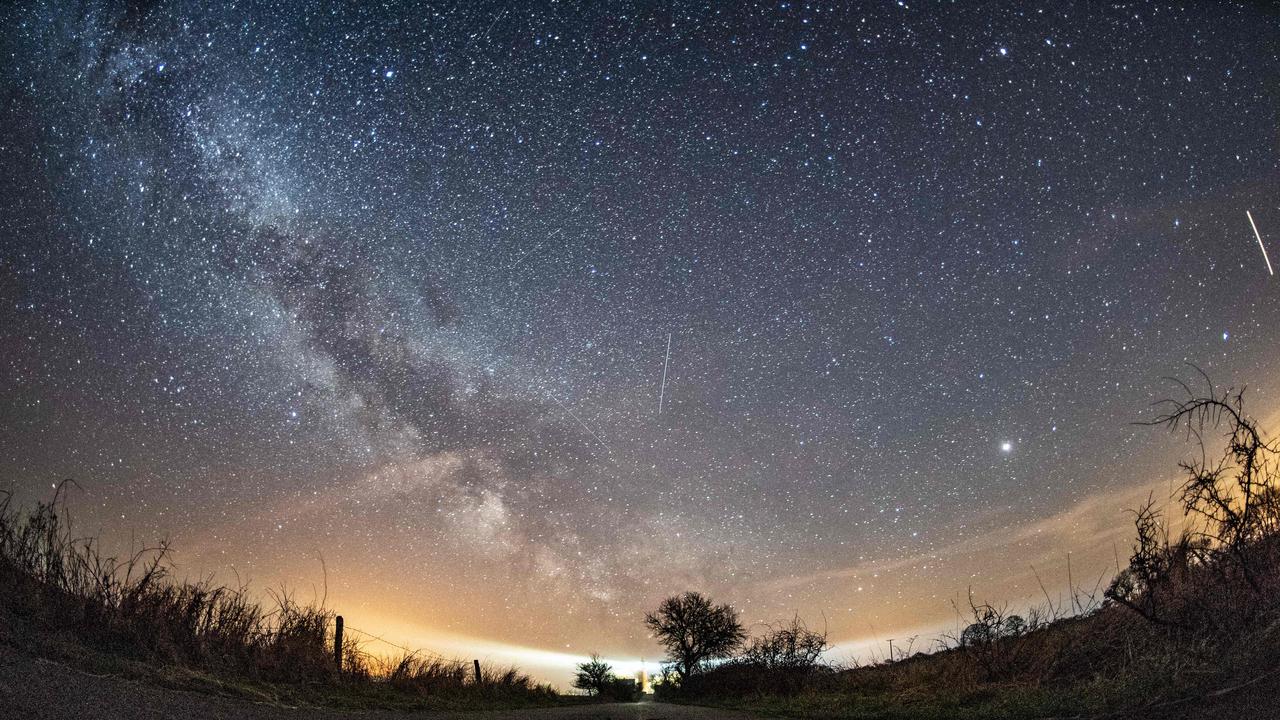 The Milky Way and another annual meteor shower, the Lyrids, seen in the night sky over northern Germany in April 2018. Picture: AFP

The Orionids appear as though they’re coming from the Orion constellation*.

But you probably won’t see them until they’ve moved away from Orion in a random direction.

So Orion won’t help you spot the meteors, but you can trace meteors back to the constellation.

You can use an app such as SkySafari or similar on a smartphone to track down the constellation.

There’s no best place to look, so just find a nice open area with a wide view of the sky.

Some of the Orionids will leave a small trail for a few seconds, which is helpful. A small part of the very large Bayeux tapestry, thought to have been made in the year 1092, showing people pointing to Halley’s comet during its appearance in the year 989.

Halley’s comet: officially known as 1P/Halley, is a comet visible from Earth every 75-76 years. It is the only short-period comet visible to the naked eye (which means without a telescope) from Earth and the only naked-eye comet that may appear more than once in a human lifetime.

Comet: a comet orbits the Sun and contains lots of ice and gas, which can result in amazing tails forming behind them (thanks to the ice and dust vaporising*)

Asteroid: a small rocky body that orbits the Sun. Most are found in the asteroid belt (between Mars and Jupiter) but they can be found anywhere (including in a path that can impact Earth)

Meteoroid: When two asteroids hit each other, the small chunks that break off are called meteoroids

Meteor: If a meteoroid enters the Earth’s atmosphere, it begins to vaporise and then becomes a meteor. On Earth, it’ll look like a streak of light in the sky, because the rock is burning up

Meteorite: If a meteoroid doesn’t vaporise completely and survives the trip through Earth’s atmosphere, it can land on the Earth. At that point, it becomes a meteorite An artist’s impression of a meteor glowing as it enters the Earth’s atmosphere. Some elements of this image are from NASA photos

compensation: making up for something lost

constellation: a group of stars forming a recognisable pattern

NASA confirms meteorite the size of a small car

How often does the Orionids meteor shower become visible on Earth?

Where are you best to go to see things clearly in the night sky?

What is the official name of Halley’s comet?

What event happens that forms a meteoroid?

What does a comet orbit?

CLASSROOM ACTIVITIES
1. Space poster
Create an A3 space poster that includes all the space definitions described in the Kids News article. Black paper would probably be the most effective using bright/metallic markers or paint to put the information on your poster. Your poster should include a sketch of each item and a brief description or definition of what it is.

Display your posters around the classroom.

2. Extension
Are you likely to see Halley’s comet in your lifetime? Calculate how old you will be when it is next expected in 2061?

What is so special about this comet?

HAVE YOUR SAY: Do you know an adult who saw Halley’s comet in 1986? Have you ever been out stargazing at night? What did you see?