University of Adelaide Associate Professor Jenny Mortimer with samples of native duckweed, which she believes has potential as a nutritious, long haul space food for a future mission to distant Mars. Picture: Naomi Jellicoe

An ordinary weed that grows around Australia could help send humans to Mars, thanks to the work of South Australian scientists.

Duckweed is a bright green aquatic plant that grows rapidly and is packed with nutrients*. Native to SA, Victoria, WA, NSW and Tasmania, duckweed might be the key to producing food for astronauts undertaking long journeys in space.

Space horticulture* is an exciting new frontier* and University of Adelaide Associate Professor Jenny Mortimer said that many lessons could be learned about efficiently feeding a growing population right here on Earth. 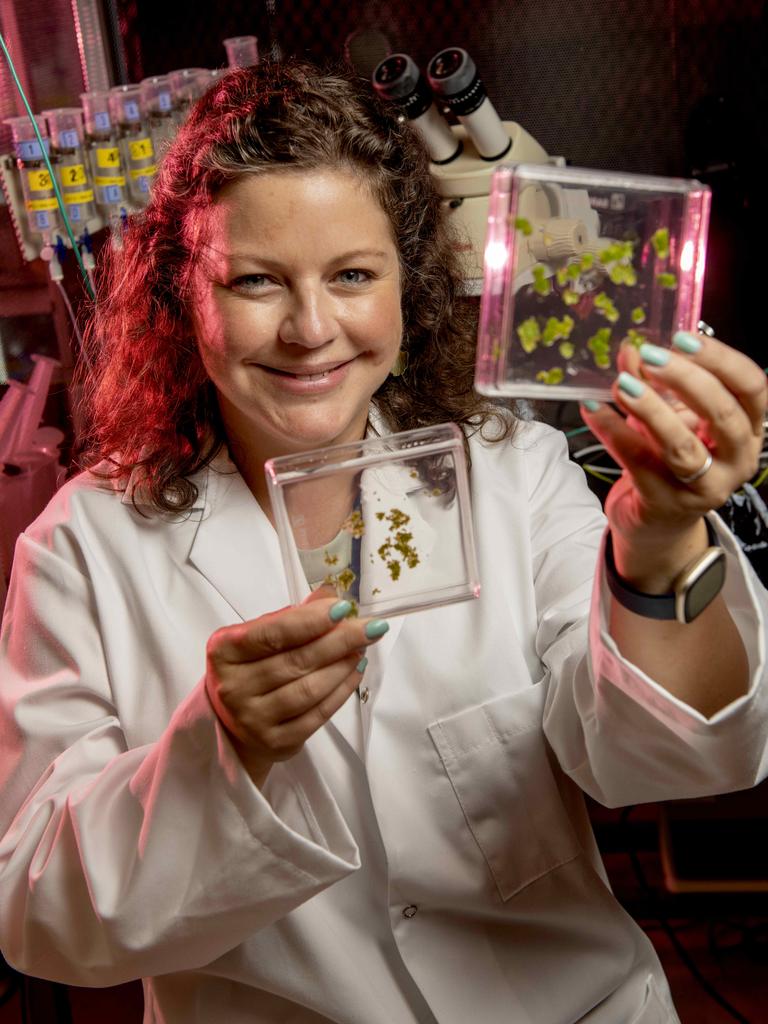 Associate Professor Mortimer, who works on the duckweed project at the University of Adelaide’s Waite campus with Professor Matt Gilliham, said it was virtually impossible to take enough food on a spacecraft to embark on a multi-month journey such as the one needed to get to Mars and back.

“Most of our space travel has actually been very close to (Earth),” she said.

“The International Space Station is amazing, but it’s only 400km above the surface. If things go wrong you can get stuff up there in less than a day. You could be in Antarctica and be more remote than the ISS astronauts are.”

She said the idea of lunar* habitation* and, eventually, Martian habitation posed some unique food challenges. 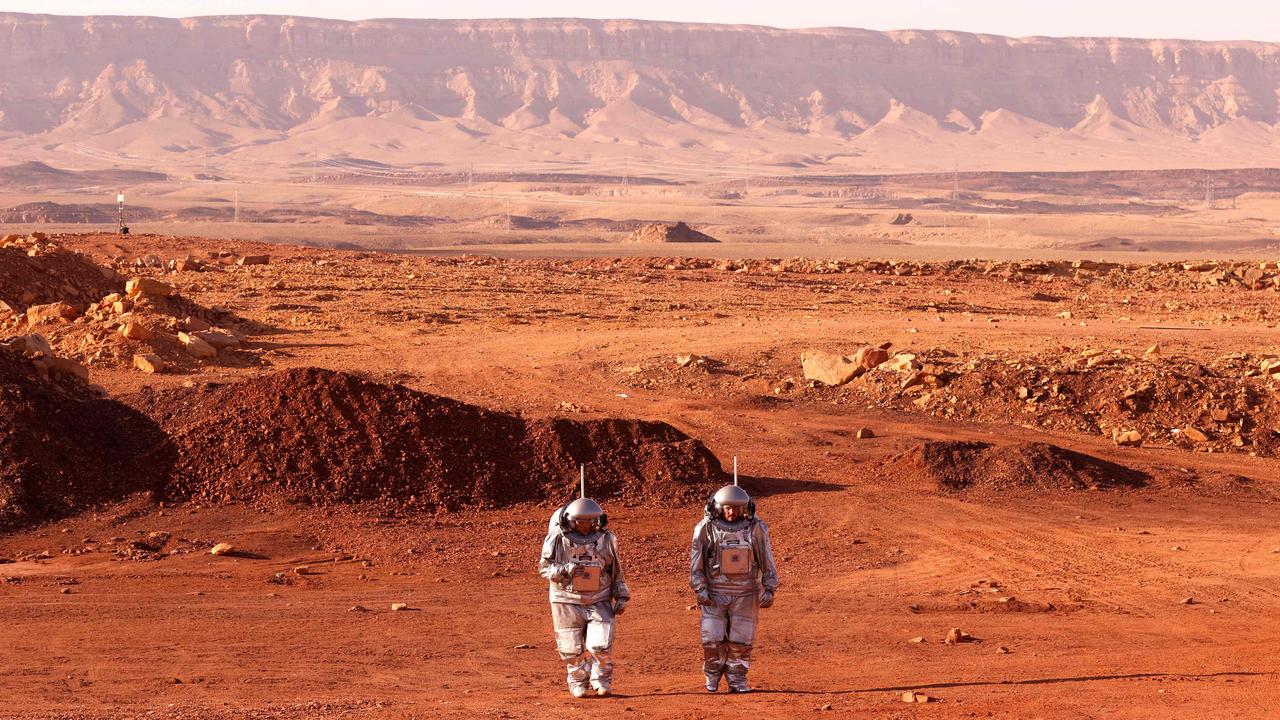 In October last year, a team from Europe and Israel spent a month at a Mars simulation site at the Ramon Crater in Israel’s southern Negev desert, but questions remain about what astronauts on a space mission to Mars would actually eat for the duration of a real life mission. Picture: AFP

“We’ve been really great at working out the physics, but we are a bit behind on the biology that goes with it,” Associate Professor Mortimer said.

“Humans are the weakest link at this point. There’s the isolation part and the psychological* component of that – humans have never been this far from the earth – and then there’s the food part.”

Associate Professor Mortimer said that with a trip to Mars taking the best part of three years, with nine months travel each way and time on the surface, a team of four astronauts would require around 10 tonnes of food.

“You can’t take that with you because you don’t have space and each kilo you take with you to space costs around $20,000,” she said.

“The current plan is that you could fly things in advance and drop it off at supply points. The problem with that is that food would have to be extraordinarily* stable. It would have to be radiation*-proof, and that constant eating of ration-pack style food is miserable.

“Astronauts can go through something called menu fatigue*, which is often seen in the military. Even though their rations are nutritious, they’ll actually lose weight because they just stop eating.” 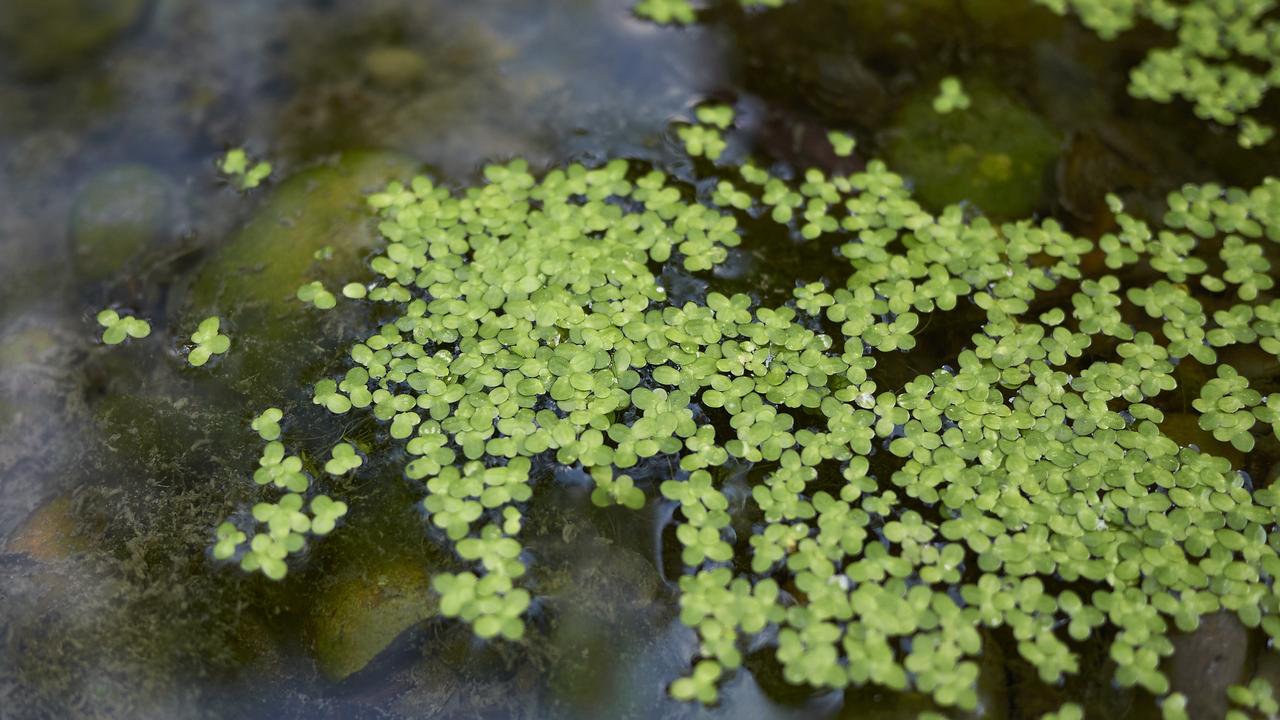 Fast-growing, abundant and rich in nutrients, duckweed could be a viable option for development as a space food.

Enter duckweed, a plant Associate Professor Mortimer thinks could be farmed on-board spacecraft – and perhaps even underground on Mars – as a nutritious source of food that could be grown vertically* using LED lighting.

“Duckweed is actually related to plants like wheat and barley,” she said.

“It was at one time a land plant and it returned to the water. What’s really fascinating about it is that it divides more like a microbe* than a plant – it splits and doubles. That means it grows really fast. It has really good protein levels and a good balance of fatty acids* and starch*, so it has a good nutrient status. So now it’s more about domesticating* it, understanding it and choosing the winning strains*.”

A future stage of the project would involve food scientists working out ways to make the duckweed palatable*.

“Perhaps they can make something that tastes like cheese or yoghurt, but that’s a research project for the next five to seven years,” she said.

Aussie-made food on the menu for astronauts

CLASSROOM ACTIVITIES
1. Mars menu
Plan a daily menu for astronauts living on Mars for a year. Using plants like duckweed, not just dehydrated food in packets. Be as creative as you like and use duckweed and other plants that could possibly be grown on board a spacecraft or in the red Martian dust as part of their menu.
Daily menu:
Breakfast:

2. Extension
If you were a scientist working on food to sustain astronauts and humans in space for a long period of time, what sort of thing would you like to invent?

It needs to be nutritious as well as interesting – and tasty, of course!

Do you think a pill could be invented that meets nutritional needs and also fills up a human so they won’t be hungry?

VCOP ACTIVITY
Imaginative dialogue
Imagine you were there during the event being discussed in the article or for the interview.