While Aussie kids were on holidays, a team at NASA was busy launching the world’s most powerful space telescope into orbit.

The James Webb Space Telescope blasted off from Earth in a Ariane 5 rocket from French Guiana on Christmas Day. The Ariane 5 rocket with the James Webb Space Telescope on board lifts off from the launch pad at the Guiana Space Center in French Guiana, on December 25, 2021. Picture: AFP

Because the telescope was too large to fit into the rocket’s nose cone in its operational configuration*, it was transported folded up.

This meant it needed to be unfolded in space – a complex and risky task.

NASA engineer Mike Menzel described the process as “arguably the most challenging deployment* program ever done by NASA”.

Engineers sent a command from the Space Telescope Science Institute in Baltimore, in the US, on January 8 for the final section of the telescope’s golden mirror to unfold.

“I want to tell you just how excited and emotional I am right now,” said senior NASA engineer Thomas Zurbuchen during a live video feed.

“We have a deployed telescope on orbit.” The James Webb Space Telescope, which has been 30 years in the making and costs about $14 billion, replaces the Hubble telescope.

It is about 100 times more powerful than Hubble. Its infra-red* technology allows scientists to see the first stars and galaxies that formed 13.5 billion years ago, peering farther back into the universe’s past than ever before. The Hubble Space Telescope is deployed into orbit around Earth during the STS-31 space shuttle mission in April 1990. Picture: NASA/IMAX. An artist’s impression of the James Webb Space Telescope, which is 100 times more powerful than the Hubble telescope. Picture: NASA GSFC/CIL/Adriana Manrique Gutierrez

“It can see the heat signature of a bumblebee at the distance of the moon,” he said.

The telescope is unequalled in size and complexity. Its mirror measures 6.5m in diameter – three times the size of the Hubble’s mirror – and is made up of 18 hexagonal sections. 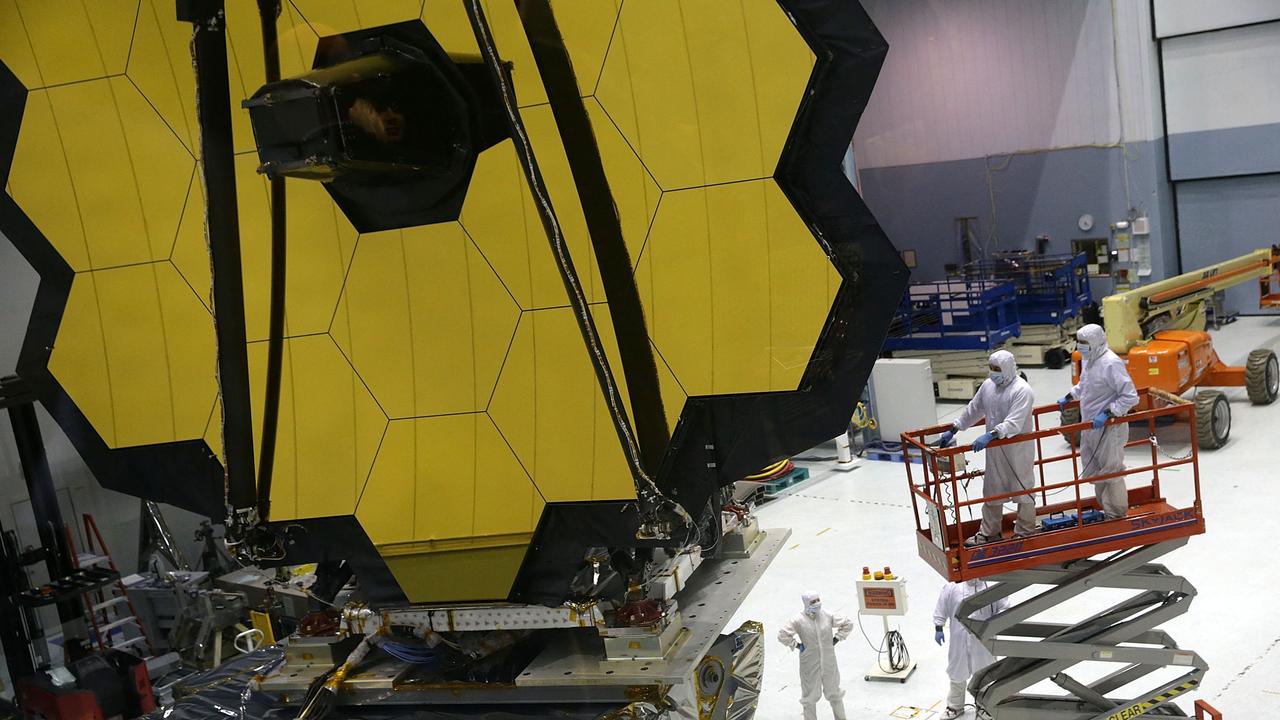 Engineers and technicians assemble the James Webb Space Telescope, with its 18-section mirror, at NASA’s Goddard Space Flight Center in the US in 2016. Picture: Getty Images North America/AFP

While the Webb telescope was scheduled to reach its orbital point 1.6 million kilometres from Earth around the end of January, it still has about another five months of set-up to go.

NASA project scientist Jane Rigby said the plan was to release a series of “wow images” at the end of the set-up period.

While she would not say what the images would be of, she said they would be sure to “really knock everybody’s socks off.”

CLASSROOM ACTIVITIES
1. Wow Images
NASA has stated it will release a series of “wow” images to showcase the new telescope once it is set-up. What images could possibly wow you?

Sketch or describe some cool things you’d love to see from the new space telescope.

2. Extension
This technology can see the galaxies that were formed billions of years ago. What information could we use from this knowledge?

What would you like this new telescope to focus on?