Touchdown confirmed! NASA has successfully landed its spacecraft on Mars and plans to explore the alien world for the next two years.

Flight controllers announced that the three-legged spacecraft InSight had touched down just before 7am AEDT* on Tuesday, after a perilous* supersonic* descent through the red Martian* skies. 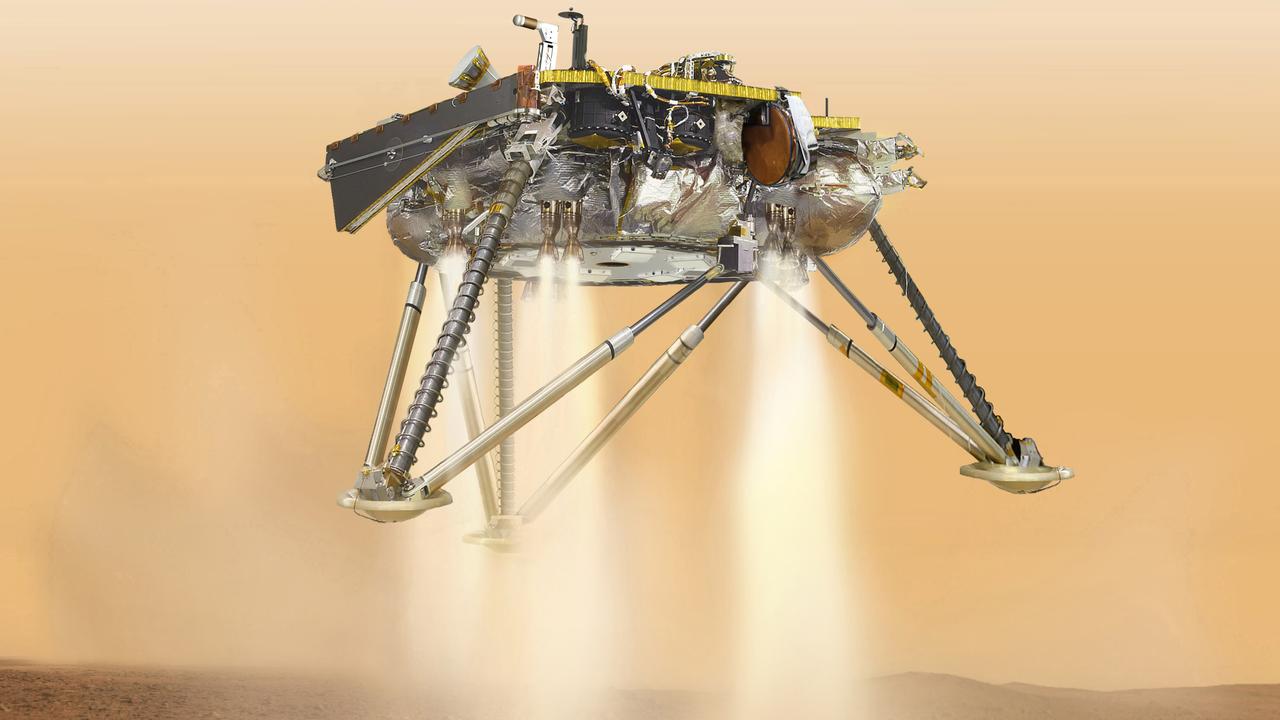 This is a drawing from NASA of what InSight would have looked like as it landed on the surface of Mars. Picture: NASA/JPL-Caltech via AP

Although InSight doesn’t have astronauts on it, it sent a message on social media platform Twitter right after landing, offering the following eerie words from the alien world: “I feel you Mars … and soon I’ll know your heart. With this safe landing, I’m here. I’m home.”

InSight also shared the first picture from Mars on Twitter saying: “My lens cover isn’t off yet, but I just had to show you a first look at my new home.” This photo provided by NASA shows the first image acquired by the InSight Mars lander after it touched down on the surface of Mars. Debris kicked up by the lander’s rockets covers the camera’s protective shield. This shield will be removed. Picture: NASA/JPL-Caltech via AP

It also tweeted*: “After a ride like that, everything here is so … peaceful. I think I’m gonna like it here. Can’t wait to feel the Sun on my solar panels, my next major milestone* later today.”

Flight controllers at NASA’s Jet Propulsion Laboratory (JPL) in Pasadena, California, US, leapt out of their seats and erupted in screams, applause and laughter as the news came in. The vehicle appeared to be in good condition, according to the first communications received.

It’s the first spacecraft built to explore the deep interior of another world, carrying instruments to detect heat and seismic* rumblings never measured anywhere but Earth. A replica of the InSight Mars Lander is on display at the NASA Jet Propulsion Laboratory in Pasadena, California, US. Picture: AFP

After waiting in suspense for confirmation to arrive from space, mission staff hugged, shook hands, exchanged high-fives, pumped their fists, wiped away tears and danced. “Flawless*,” declared JPL’s chief engineer Rob Manning. “This is what we really hoped and imagined in our mind’s eye,” he said. “Sometimes things work out in your favour.”

US Vice President Mike Pence called to congratulate the US space agency for its hard work.

A pair of mini satellites trailing InSight since their May lift-off provided practically real-time updates of the spacecraft’s descent.

The satellite also shot back a quick photo from Mars’ surface, the same one that was shared on Twitter.

The image was marred* by specks of debris on the camera cover. But the quick look at the view showed a flat surface with few if any rocks — just what scientists were hoping for. Much better pictures will arrive in the hours and days ahead.

“What a relief,” Manning told news agency AP. “This is really fantastic.” He added: “Wow! This never gets old.” — InSight launched on May 5, 2018 from the Vandenberg Air Force Base, California, US.

— Two small satellites followed InSight to take photos of the spacecraft and send them back to Earth.

— InSight’s journey from Earth to Mars was about 485 million kilometres.

— The distance between Mars and Earth varies because of the planets’ orbits. This photo of Mars was made by combining more than 100 photos of Mars taken by Viking Orbiters in the 1970s. Picture: NASA via AP

— Messages coming back to Earth are taking more than 8 minutes to travel from Mars.

— The spacecraft reached the surface after being slowed by a parachute and braking engines.

— InSight’s Mars’ landing site is Elysium Planitia, a flat, smooth plain selected not for its surface features, but for safety. This drawing from NASA shows the InSight lander drilling into the surface of Mars. Picture: NASA via AP

— A 1.8m robotic arm will place a piece of machinery called a mole and an instrument called a seismometer on the ground. The mole will burrow 5m into the interior of Mars to study what is under the surface and measure the planet’s internal heat. The seismometer will listen for possible quakes.

— Previous missions were to study the surface geology*.

— NASA last landed on Mars in 2012 with the Curiosity rover.

— The InSight mission is planned to take one Martian year, which is equal to two Earth years.

NASA Sun probe on its way

AEDT: Australian Eastern Daylight Savings Time, which is the time in Victoria, Tasmania, NSW and ACT

perilous: full of danger or risk

supersonic: faster than the speed of sound

seismic: relating to vibrations of the crust of a planet and quakes

marred: made less than perfect

geology: science of structure of a planet and its rocks and soils

1. For how long will the spacecraft explore Mars?

2. Are there people on this spacecraft?

3. What will the instruments and equipment measure?

4. What was wrong with the first photo the satellite sent back from Mars?

5. How fast did InSight travel on its journey?

Looking at the picture of the InSight spacecraft and knowing what its mission and jobs are on Mars, draft some possible tweets that could be sent out from NASA’s Twitter page. You’ll notice the tweets are being written as if it’s from a person, not a spacecraft and are well thought out and creative.

Tweets have to be written short and sharp as you are limited to 280 characters a tweet.

Write at least 3 creative tweets from the Mars mission.

Extension: How long has it taken for the InSight spacecraft to reach Mars? Why do you think one Martian year equals two earth years?

HAVE YOUR SAY: If you launched a space mission, where would it go and what would it do? No one-word answers. Use full sentences to explain your thinking.