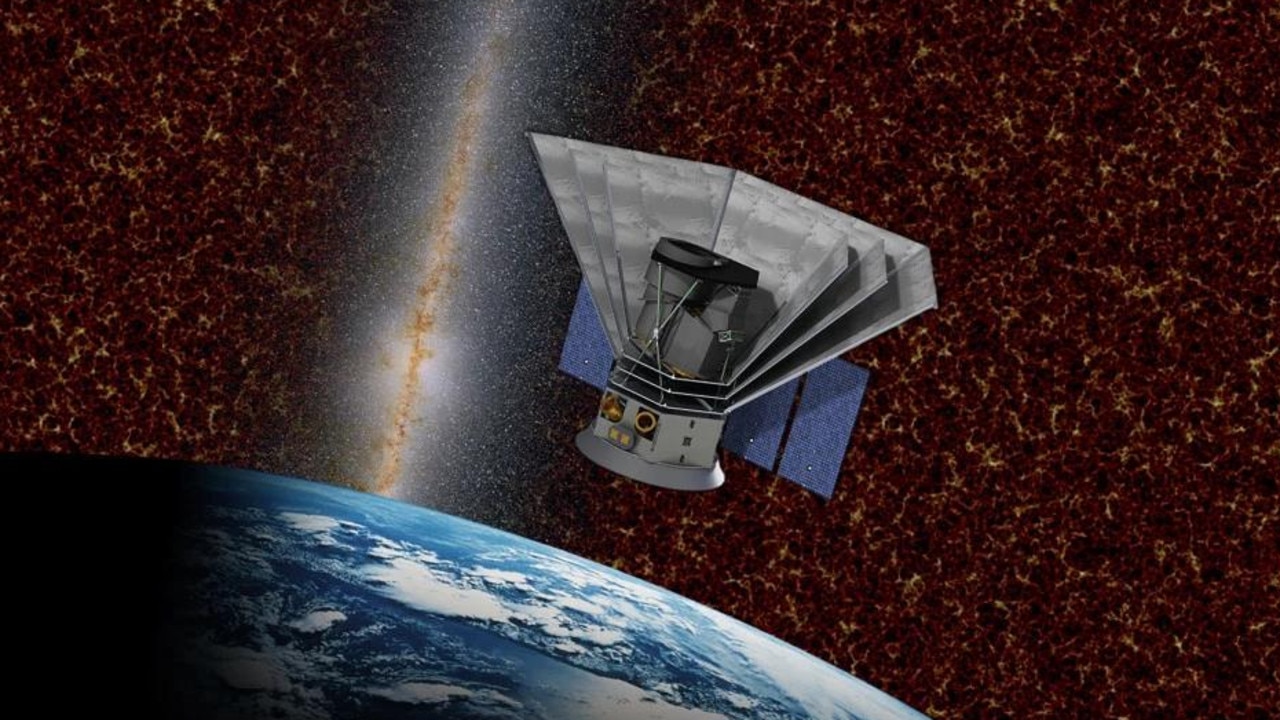 The SphereX probe will explore the origins of the universe. Picture: NASA

A pioneering new NASA spacecraft will peer into the beginning of time to explore how the universe began.

The $343 million SphereX probe*, due to launch in 2023, will measure how light shines from ancient galaxies that are billions of light years* from Earth.

It also aims to help in our search for aliens by uncovering how common certain building blocks for life are. 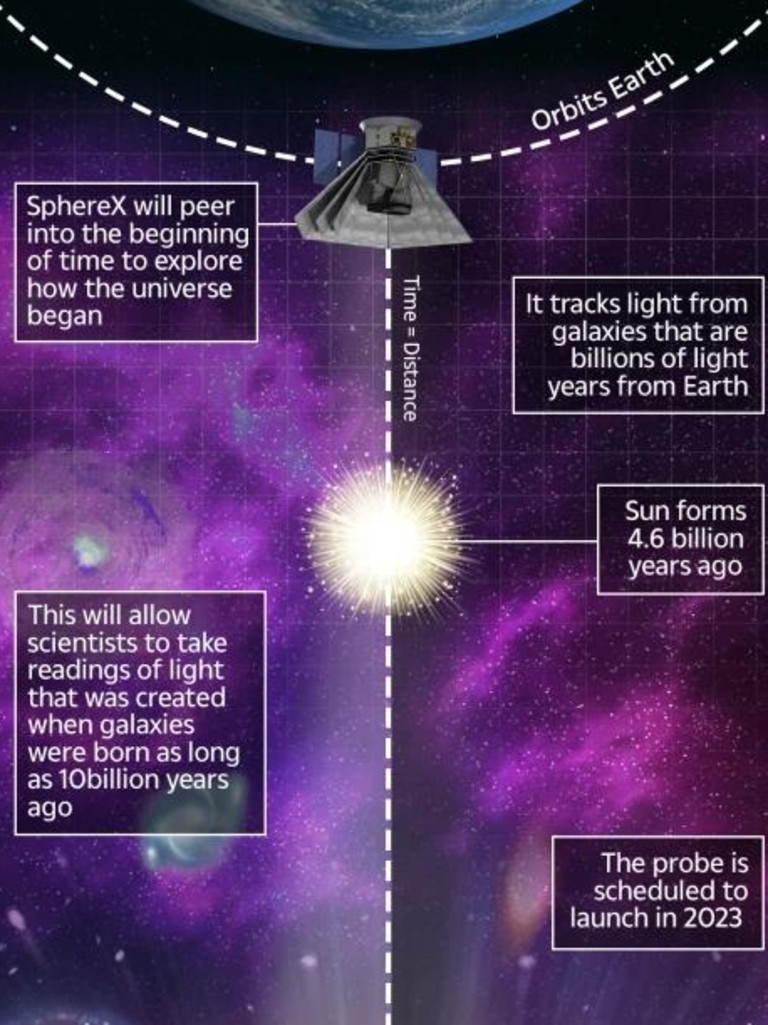 Light from the Big Bang is still moving towards the Earth. The SphereX craft will peer into the distance to detect and measure light from long ago.

“This amazing mission will be a treasure trove of unique* data for astronomers*,” said NASA’s Thomas Zurbuchen.

“It will deliver an unprecedented* galactic* map containing ‘fingerprints*’ from the first moments in the universe’s history.

“And we’ll have new clues to one of the greatest mysteries in science: What made the universe expand so quickly less than a nanosecond* after the big bang?” The Whirlpool Galaxy, a famous spiral galaxy. It and our own Milky Way Galaxy are moving apart at over 400 kilometres per second. Picture: NASA/ESA

The spacecraft will examine galaxies near and far, some so distant their light has taken 10 billion years to reach Earth.

NASA said it will gather data on more than 300 million galaxies, as well as more than 100 million stars in our own Milky Way, as part of the mission. 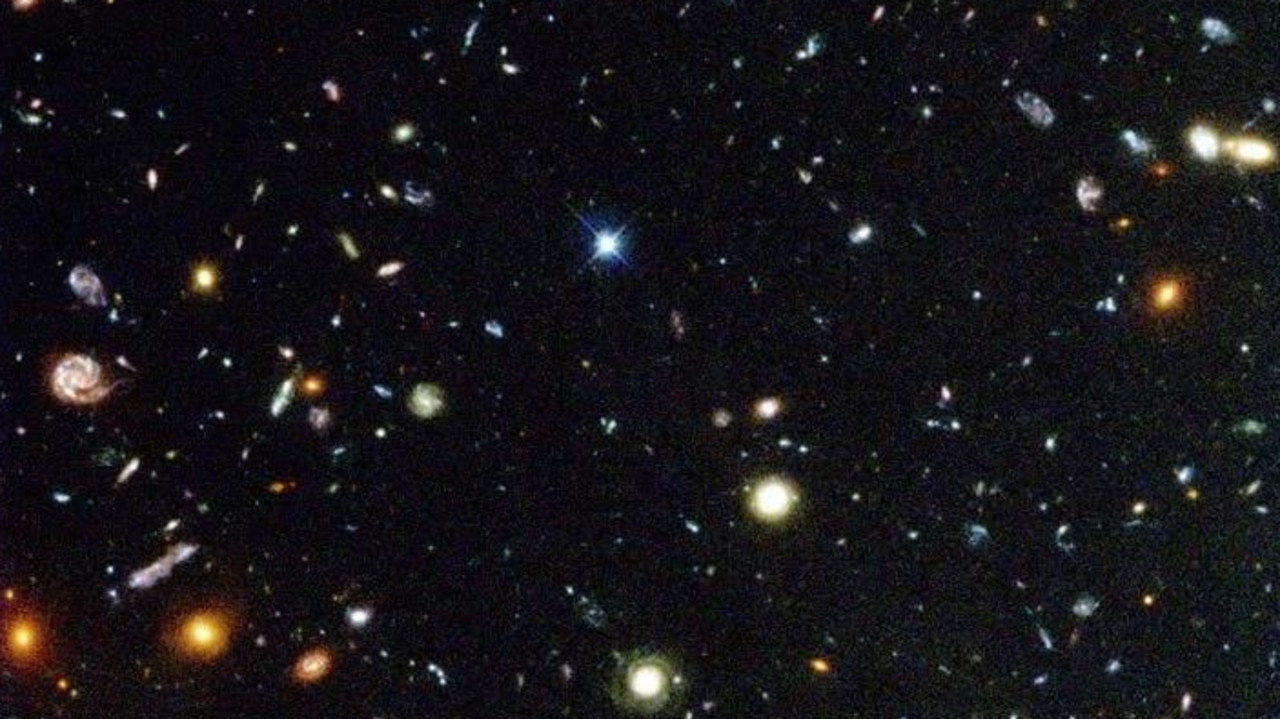 SphereX will work alongside NASA’s Hubble Space Telescope, which is also exploring the origins of the universe. This image snapped by Hubble is the first significant look back to the era of the universe when early galaxies were forming. Picture: NASA

SphereX will measure the amount of visible and infra-red* light shining from galaxies.

This will allow scientists to detect the presence of water and organic* chemicals that are essential for life to grow.
THE BIG BANG

The majority of scientists around the world accept the same idea or model for how the universe began.

This is called the Big Bang theory.

This idea or model is that the Universe began around 14 billion years ago. Before this, the entire Universe was crammed into a tiny, hot bubble that was perhaps the size of a pin head or an apple (no one was there to measure it). There was a massive explosion and everything began to cool and expand, or move outwards.

The Big Bang theory has been the one widely accepted idea for at least 50 years.

Before this time, there were many other scientific theories for the beginning of the Universe.

While scientists have some evidence to support this theory, this probe will help them to find out more about this theory.

What questions do you have about the beginning of the universe? Write a list of at least 3 questions you would like this probe to help find out the answers to.

2. Extension
Do you think it is important to find out how the universe began? Is this probe a good use of money?

Write your opinion in a ‘Letter to the editor’. Your letter should be no more than 150 words, it should outline what article you are referring to, when/where it was published and your opinion and your reasons to support your opinion.

I read with interest about the SphereX probe that NASA plans to launch in 2023 as read on KidsNews (title, date of article). This probe is …

HAVE YOUR SAY: Would you rather explore Earth or space?