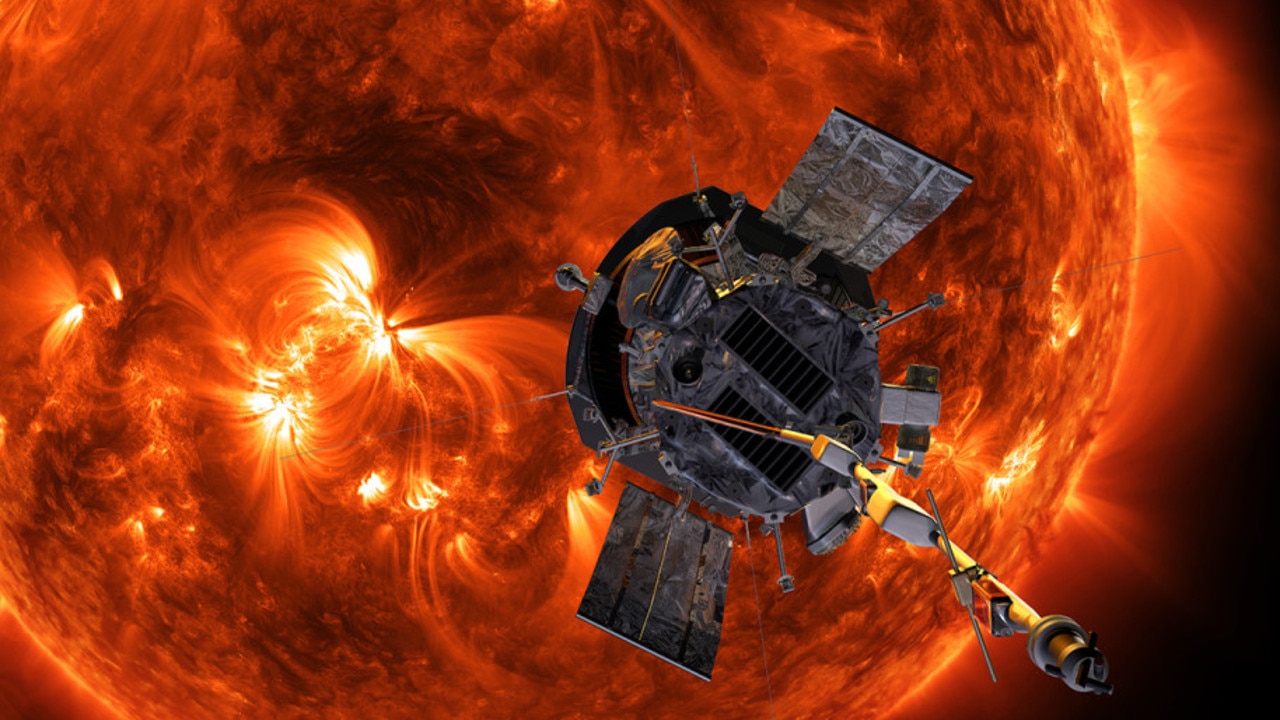 An artist’s impression of the Parker Space Probe near the Sun. Supplied: NASA

A National Aeronautics and Space Administration (NASA) probe has plunged* into the Sun’s atmosphere as part of a daring mission to learn more about our closest star.

The journey marks the car-sized Parker Solar Probe’s closest solar encounter* yet, coming closer to the Sun than any man-made object in history.

It began its descent* last week, and will be out of communication with Earth for several days.

Travelling within 24 million kilometres of the Sun’s surface, the probe will experience temperatures of 1300 Celcius on its trip.

During the mission, all four instruments aboard the Parker Solar Probe will be collecting data from the Sun’s outer atmosphere, or “corona”.

Any data collected will be sent back to Earth this autumn within a period of several weeks.

It marks the second of 24 planned fly-bys* for the spacecraft.

The last of these, in 2024, will see the probe make a “final descent” into the Sun where it will burn up under extreme temperatures.

It’s hoped that the $2.1 billion mission will give NASA an up-close look at how our nearest star works. Specifically, NASA is investigating how events known as solar flares erupt from the star.

Flares can disrupt communications on Earth and in extreme cases even throw out power grids.

The probe was launched in August 2018 and travels at a top speed of 690,000km/h — faster than any spacecraft in history.

The craft is using Venus’s gravity over the course of its 150 million kilometre journey to gradually bring its orbit closer to “touch the sun”, as NASA calls it.

Of course, the spacecraft won’t actually touch the Sun — its temperature is a whopping 5500 degrees Celcius and would instantly destroy any probe. Instead, it will fly into the sun’s atmosphere, where it will observe from a “safe distance” of approximately 6.4 million kilometres away from the star’s surface — protected by a “cutting-edge* heat shield”.

“The spacecraft will provide unprecedented* information about our Sun, where changing conditions can spread out into the solar system to affect Earth and other worlds,” explained NASA in a statement.

“It will trace how energy and heat move through the Sun’s atmosphere and explore what accelerates the solar wind and solar energetic particles*.”

VIDEO: The Sun emits powerful solar flare. Note: there is no audio on this video

This mission is part of NASA’s Living With A Star program, which aims to uncover the secrets of the relationship between the Sun and Earth.

The space agency said: “The goal is to provide the comprehensive* research needed to understand the many factors affecting the Sun-Earth system and thus provide the information necessary for improved forecasting of space weather.” Bright bands of plasma on the Sun connecting from one active region to another, even though they are tens of thousands of miles away from each other. Picture: AFP / NASA/GSFC/Solar Dynamics Observatory

FACTS ABOUT THE SUN

What happens when you get sunburnt?

CLASSROOM ACTIVITIES
1. Mission Profile
Create a 1-page “Mission Profile” outlining the facts and details about this mission. Your profile should look professional, as though it has come from a NASA file, and include the following details:

2. Extension
Whilst the Parker Space Probe is so close to the sun, it is out of communication with Earth for several days. Imagine how this may feel for those in control of the mission and write a list of words that could describe their feelings while the probe remains out of contact, and then when communication is re-established. How many words can you list?

HAVE YOUR SAY: What question would you like to ask NASA about the Sun?
No one-word answers. Use full sentences to explain your thinking. No comments will show until approved by editors.